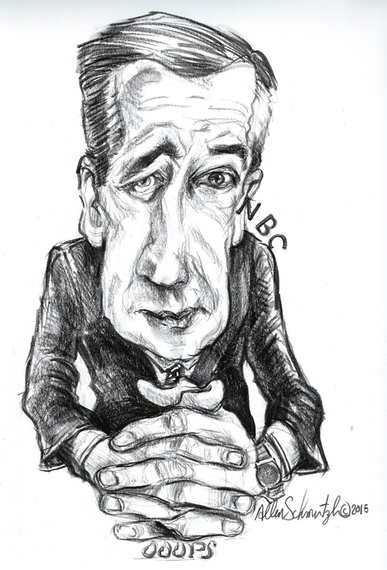 The revelation that Brain Williams, the icon of network evening anchor news, exaggerated his role in a war related news story is painful. In a trial the judge always advises the jury that if a witness is caught in a lie, then you must question everything that witness says. Similarly, in our post Brian Williams's news world, we now have to pause and question the integrity of journalists. A trust in truth has been broken, and sadly, we must accept another damaged, maybe even broken institution. The victim from this admission is truth and a society that hungers to believe. We now live in a world prepared to abandon trust in institutions and give greater weight to "in what we can't trust."

Even though I, along with millions of folks, abandoned the nightly ritual of sitting by the TV around dinnertime to take in the day's big news, the shadow of this drama casts a darkness that resonates across the land. The digital age revolution has liberated us from being leashed to phone cords dangling frustratingly from walls and from humongous super-size-me TV screens that occupied too much of our living space and could suck the life out of a room.

We can now get information any time on our own from smart devices wirelessly flirting with cyber clouds. We now can get the big news in faceless economized tweets, fast, visceral, focused and in our own private experience. The large community receiving the exact news at the exact time is mostly a cute societal pastime. Only those who stubbornly cling to a pre-digital world and are aging away from a connection to changing societal norms remain in the Brian Williams format. But the Brian Williams "Choppergate" scandal is so horrible because it contributes to the culture of "in what we can't trust."

Although Brian Williams was great at his job, he gave great voice, he had the looks and he was trusted -- that job ceased being a news anchor when stories of crazy weather and of cute children and animals overcoming tremendous adversity became standardized requirements to pair with nightly overdoses of reports of death, destruction, war, malaise and fear to fill a twenty-two minute monologue.

The evening news is nothing more than evening entertainment. It is another programmed slot to capture a demographic in our capitalistic system to sell commodities in the form of highly stylized and expensive advertisements. Brian Williams became a brand name in that marketplace, ruled by ratings, ratings translating into revenues, and the anchor-as-brand behaving as if he was as important as the other content. Brian Williams stopped being a journalist when he crossed over into media celebrity stardom, got paid as one and lied. What would Walter Cronkite say? What can Americans still trust to hold integrity, ideas and content above the corrupting influence of money, power, greed and position?

The news about the news and the news guy is yet another example of "in what we can't trust" and feeds an epidemic of distrust that is corroding the infrastructure of our collective. I am a 62-year-old guy with a full head of hair, stuck with one foot on the shifty digital bridge to the expanding world of mistrust, anarchy, divisiveness and shattered aspirations from too many fallen inspirations once seen as heroes, and another foot in the shrinking world where trust ruled -- trust in voices of integrity, trust of authority, trust of a centralized governance or institution and trust that could hum me to sleep each night.

I was born a cynic, and for me to admit to miss the feeling of trust is nutty. But I ache for the good-ol' days when news was news, when you trusted that journalists did the hard work to check the system of fact-checkers getting the facts factually. Now, all I can do is check my Twitter feed or cloud networks to find information, maybe catch a program claiming to be a news media outlet, while knowing the truth is somewhere out there but painfully cling to "in what we can't trust."