By Mark Schuller and Mark Snyder

There is a Haitian proverb, se bouch ki manje tout manje, men se pa bouch ki pale tout pawòl, the mouth eats all the food, but not all talk comes from your mouth. In the U.S. we would say, actions speak louder than words.

The events this week in Haiti's internally displaced people IDP camps -- dramatized by Hurricane Emily -- highlight the importance of this lesson.

Following the eviction of 514 families from the Sylvio Cator stadium mid-July, high-ranking U.N. officials issued its strongest language yet condemning forced evictions in Haiti as violations of IDPs' human rights.

The IDPs needed not only words but concrete action.

On Wednesday, August 3, the last of the 296 families were evicted from Camp Django in the Port-au-Prince suburb of Delmas, the site of a rash of forced evictions. Camp Django was situated a mere yards away from Carrefour Aéroport, the Airport Corner which was violently shut down at the end of May.

The U.N. Police stood their watch at the camps entrance. The purported landowner and municipal government used many of the same tactics that over 40,000 evicted IDPs and 125,000 more facing eviction have experienced since they sought refuge on private and public property since the January 2010 earthquake. The residents of Django were offered 125USD to leave their tarp shelters. Though about 100 families accepted the funding, many protested the offer said to be far too little to enable better living conditions elsewhere. Camp residents were then beaten by police and agents of the landowner. The IDPs were threatened with guns and machetes. Their shelters and the camp's latrines were destroyed. Men wearing shirts of the Mayor of Delmas' agents made verbal threats, saying the will suffer worse than illegal evictions at other camps.

With violence and further threats looming, the IDPs organized with an Anti-Eviction movement composed of Haitian civil society, other IDP camps, and international partners to resist the eviction. They held a press conference to tell their story and on Monday, August 1, the date set for their eviction, they held a peaceful protest to call attention to the violation of their rights.

That afternoon, the Haitian National Police (PNH) entered the camp along with the attackers from the prior incidents. They again told all the IDPs they had to leave on their own or they would be removed. At 9pm, after all the human rights investigators left, PNH and the same aggressors returned. They again had firearms, threw rocks, and threatened further violence; pressuring the IDPs to leave the property. All the while UNPOL was on their post at the camp entrance.

Tough talk from high-ranking U.N. officials for more assertive resistance against forced evictions failed to protect the residents of the camp. After the violence occurred, the Stabilization Mission of Haiti (MINUSTAH) had positioned manned U.N. Police (UNPOL) SUVs outside the camp. Two to three vehicles remained in shifts at the entrance of the camp day and night. But their mission caused confusion within the camp, many IDPs stating that they believed they were there to assist PNH and the purported landowner with the eviction. 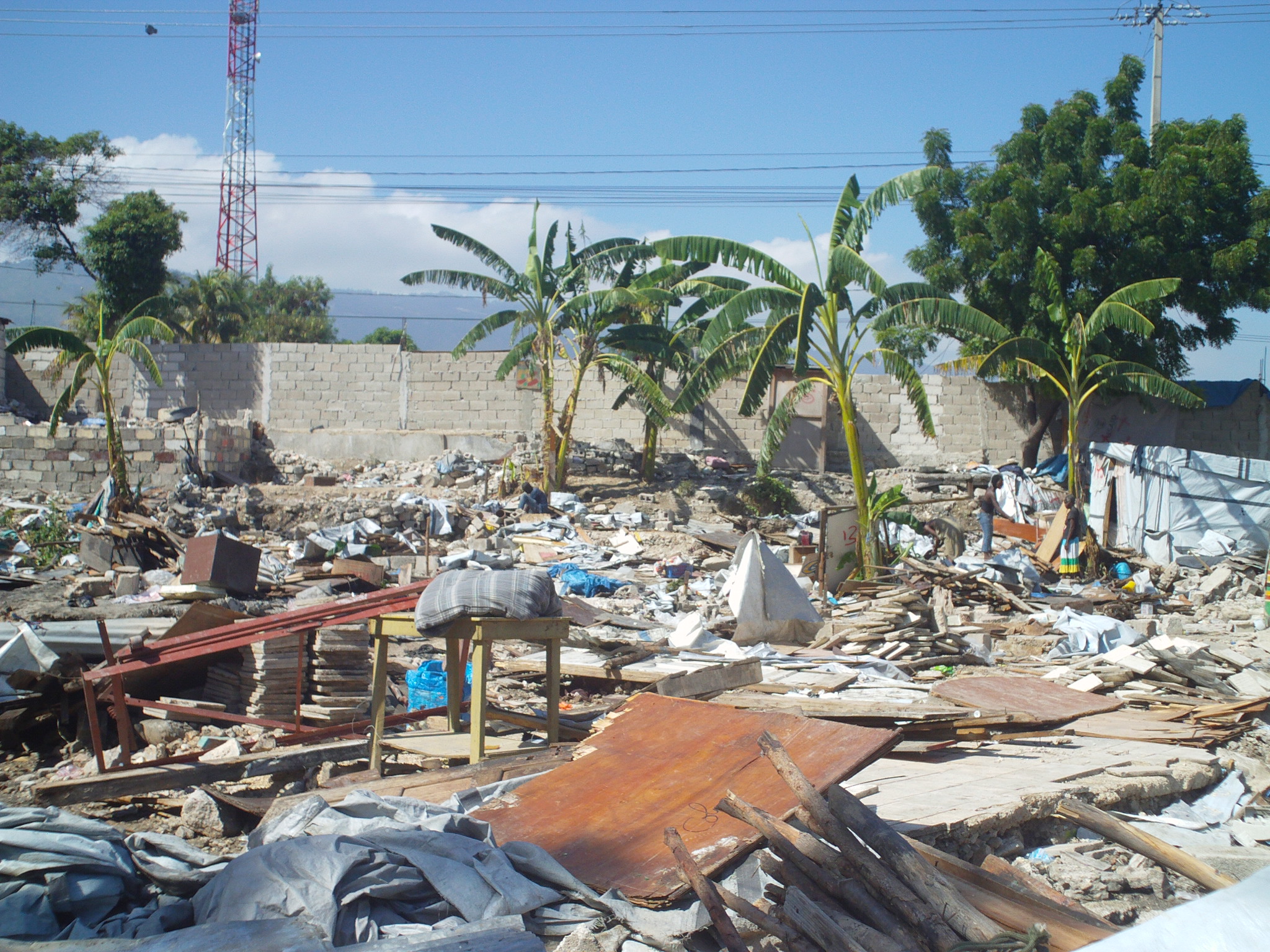 Camp residents reported that the U.N. officers did not take any actions to stop the attacks as they were happening, and only acted as "tourist taking photos" after the incidents. During the final threat on August 1, at 9pm, the UNPOL onsite claimed ignorance of the presence of PNH or the landowner's agents, or of the final in a long succession of threats that pushed the IDPs to finally flee the camp.

More assertive resistance would appear to mean simple presence of the vehicles and officers at the camp. But this proved to not be adequate to prevent the violation of the rights of the Haitian citizens. By Tuesday morning, the majority of the families left, of those that remain, not a single could explain where they would land. The last of the families fled Django on the eve of landfall of tropical storm Emily, possibly making their eviction into some of the most dangerous of conditions of any eviction yet. The population waited in dread as Hurricane Emily drew nearer to Haiti.

With the impending tropical storm, the government of Haiti has urged people to evacuate vulnerable locations, while they continue to take a visible role in the forced eviction from these same area. There was a red alert; flash flooding and mud slides were predicted following Tropical Storm Emily, which was slated to drop as much as 20 inches of rain. Emily dumped sheets of rain beginning in the middle of the night Thursday morning on the south shore of Haiti, particularly Jacmel with thousands of people living in IDP camps.

Meanwhile, how were Port-au-Prince residents faring?

Radio Ginen reported a press conference held by evacuees from the Sylvio Cator Stadium who were resettled to "Bicentennaire Camp" downtown, across from the old USAID office, yards from the bay. Residents denounced the fact that the camp -- that still had yet to have any water, toilets, or other sanitation installed -- flooded following Monday evening's rainstorm.

Several of the International Organization for Migration (IOM)'s communication team fanned out Wednesday with the most recent publication of Chemen Lakay, Creole-language comic strip on a series of topics. This issue was on preparing for a hurricane.

In eight camps Schuller visited on Thursday, when Emily still loomed overhead, only three camps had the Chemen Lakay in hand from Wednesday's distribution. Committee members in one camp in Carrefour reported that residents didn't want to take the publication with advice such as tying down the tents and digging deeper holes to hold the tent poles to reinforce the makeshift dwellings, buying three days' worth of food, and securing important documents in plastic bags. According to one committee member, "Why tell us that we have to do this and that when they know we don't have any of these materials?" Another quickly added, "They could have at least offered a gesture by buying a box of ziploc bags for us to distribute. They gave us nothing." It's like lavi men, siye atè, washing your hands only to wipe them on the ground.

Most of the camps -- selected based on a purposive sample for Schuller's five-week research across the Port-au-Prince metropolitan area -- were not so lucky.

Committee members of one camp texted their IOM representative, reminding them about the state of their emergency preparedness. "You see how ripped up our tarps are? They don't even keep out a little rain or wind, to say the least about a tropical storm." They followed up with a phone call, to no avail. As of this evening when the immediate threat had passed, no response came.

A leader in a camp known by residents as "Depoze" in Delmas 2 called their IOM camp manager who typically has a presence in the camp every day. Luckily, he picked up. However, the IOM representative reported that MINUSTAH had informed the IOM [and, presumably, other international agencies] to not go outside, because it was too dangerous. Depoze responded, "but we in the camp are outside. If it's too dangerous for you, what about us?" to which the IOM representative laughed. 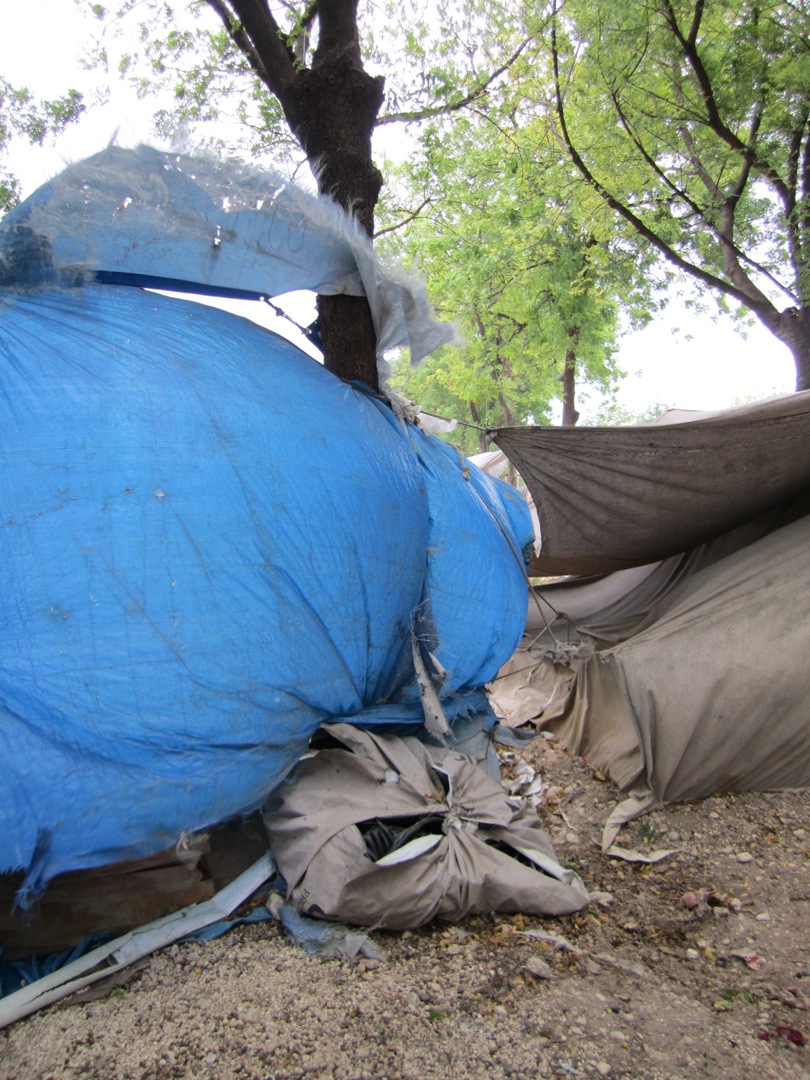 Residents of a camp near Cité Soleil didn't report being visited by the Spanish Red Cross, the camp management agency, but that they didn't need to call them or the emergency hotline. A resident had received Red Cross training and also updates. The communications flag above the camp was green, emblazoned with the word "vigilance." A nearby camp flew a red flag, as did camps neighboring Bicentennaire.

One of the committee members' tarp had just ripped on Wednesday night, dramatizing the severity of the situation. Privately, this committee member also worried that camp residents didn't really know what the color code means.

This said, the same Spanish Red Cross who had managed another camp in Delmas hadn't done any similar disaster response training for camp residents. We were the only foreign visitors to the camp on the day of Hurricane Emily to check on them. Indeed we had only seen one U.N. truck on the road all day long, and no NGO vehicles. Residents could only guess as to why the Red Cross -- who specializes in emergency disaster response -- failed to provide this service. Two theories were that the camp was under threat of eviction and that there was a transition, from the Spanish Red Cross to an international consortium.

Residents of Carradeux, where some 30,000 IDPs still live under t-shelters, tarps, and tents under the constant presence of a U.N. base, felt totally abandoned. "Everyone tells us to move to a more permanent shelter. That's just it. If we had somewhere else to go, we would have already left the camp!" Were there any plans for temporary storm evacuation? Of the ten people we asked, most of them committee members of one or another "sectors" within the camp, none were aware of any. To dramatize the situation, one of them called the two emergency numbers given out on the materials. One said "no response" and another "this number is incorrect."

Late this afternoon, the storm was downgraded as it made its way north, away from the country. This time around, the hundreds of thousands of IDPs were lucky.

But what about the next hurricane?