WASHINGTON -- While the swearing-in ceremony might have been the main draw for many on Inauguration Day, plenty of people turned out early along the Pennsylvania Avenue parade route between the Capitol and the White House.

As Willie Geist of NBC News reported on Monday morning, some of the most sought-after spots were near the Navy Memorial at 7th Street NW, opposite the National Archives. It was around that location where President Obama and first lady Michelle Obama got out of their limousine and started walking along the processional route four years ago during the president's first Inauguration.

And sure enough, for their second Inauguration, the president and first lady left their limousine around 9th Street NW and walked for approximately three blocks before getting back in their motorcade. They arrived in the vicinity of the White House around 4:10 p.m. where they later gathered to watch the remainder of the Inauguration parade from the official review stand opposite Lafayette Park.

The parade took a momentary pause as the first family, Vice President Biden and his family and their guests made their way into the review stand just before 4:45 p.m.

The parade was originally scheduled to start around 2:30 p.m. but was delayed by the Inauguration luncheon in the Capitol's Statuary Hall, which was also behind schedule.

Some of the most recognized landmarks in the nation's capital sit along the processional route.

The president passed the U.S. Department of Labor, the Canadian Embassy, the Newseum, the National Gallery of Art, the Federal Trade Commission, the National Archives, the Navy Memorial, the FBI headquarters, the Justice Department, the Old Post Office Pavilion, Freedom Plaza, the John A. Wilson Building and the Treasury Department, among other buildings, memorials and statues.

There were some protesters along the route, including members of the Westboro Baptist Church, who received a permit to demonstrate at John Marshall Park near 4th Street NW and Pennsylvania Avenue.

At the John A. Wilson Building, the seat of the District of Columbia government, local officials had a protest banner on full display decrying the lack of full and equal congressional representation for residents of the nation's capital. 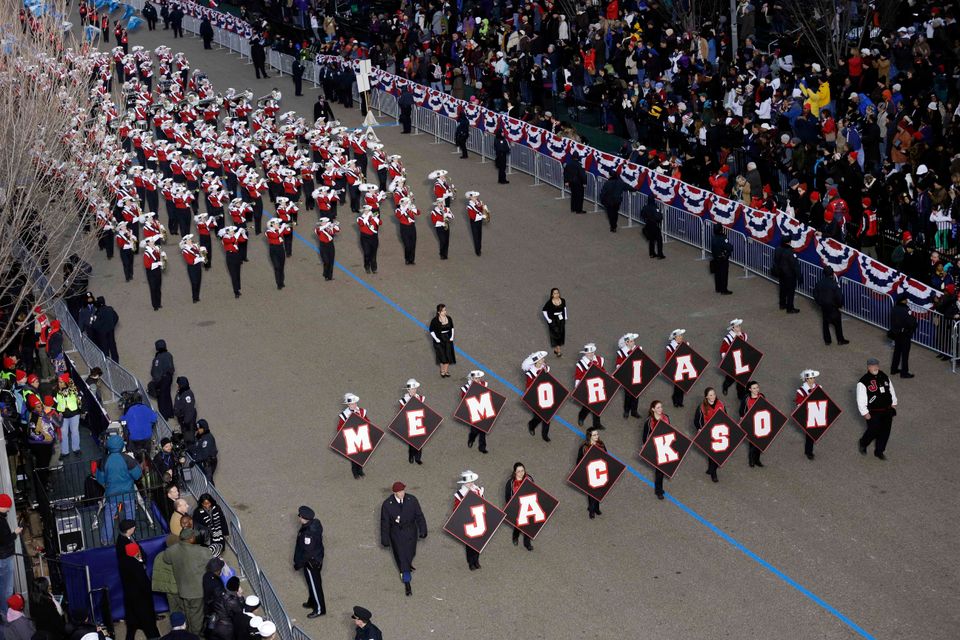