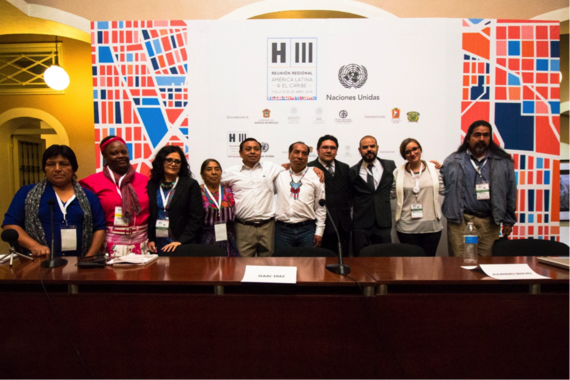 Photo taken of speakers and participants of the Indigenous Forum session in Toluca.

Toluca de Lerdo is the capital of the State of Mexico. The City was founded in 1530 and has had a storied ancient, colonial and modern history, with a backdrop of majestic Spanish colonial buildings and the Nevado de Toluca volcano that rises to 4,570 metres at its tallest peak. It is the home of the Otomi people, who are one of the first peoples to live in the Valley of Mexico and Toluca Valley, and who built their communities around the extensive lake system in the area. In modern times the valley is an industrial hub, facing both the positive impacts of urbanization in regards to economic growth, but as well the negative impacts of industrial pollution and the economic inequalities that are far to common globally.

Toluca was an excellent host for the Latin American and Caribbean Regional Conference for Habitat III, representing both the historical and the modern impacts of urbanization. The conference not only brought in the larger regional urban issues, but also became an important place for those who are often most marginalized to be heard: women, youth, children and indigenous peoples.

Two events were held which assured the voices of the above were heard - the "Youth Blast", organized by the Major Group for Children and Youth, and the Indigenous Cities session hosted by UN-Habitat Youth Unit and Housing Unit.

The Latin American and the Caribbean has more than 150 million people between 15 and 29 years old, with 35.4 million of those young people living in poverty and 12 million in extreme poverty. There are approximately 40 million indigenous people in Latin America and the Caribbean that belong to the almost 600 indigenous peoples of the continent. It is a region that has so much to say and so much to demand; youth and indigenous people came to the conference to claim their rights, demanding that they be engaged in effective and inclusive participatory mechanisms with the involvement in cities at all levels.

One of the central positions of the participants from both events was the demand for safer and more inclusive cities. In regards to this, there was recognition that the cooperation between indigenous community, youth, national and local governments was critical, and that it must include everyone, especially young men and women, in the governance of cities - specifically in the design, monitoring and evaluation of public policies in order to reduce crime and violence in human settlements.

A number of case studies were presented that outlined the challenges that indigenous young people faced - specifically in relation to engagement in local governance.
"We see that youth, especially Aboriginal youth, are often marginalized from decision making," stated Joyati Das, Senior Director for Urban Programmes, "Yet, when given the support, we have found for example in La Paz, Bolivia, that indigenous youth can become actively engaged in local decision making processes."

Isaac Diaz, Chairman of the Advisory Council of Indigenous in Mexico, emphasized the need to listen to the experiences and knowledge of indigenous peoples in achieving sustainable cities, and stressed that indigenous culture has coexisted with nature since centuries and treated mother earth with unflinching respect.

Meanwhile, over the two-day Youth Blast event, young people began to shape a position paper that identified the main themes that young people thought must be included in the New Urban Agenda. The Position Paper for Latin America and Caribbean Regional Meeting for Habitat III outlined key areas that reflect youth's concerns or the new Urban Agenda such as fighting inequality and promoting safe and Inclusive Public Spaces, especially for those most marginalized such as indigenous peoples. The participants strongly recommended that the New Urban Agenda should set the goals and targets in alignment with the Sustainable Development Goals and implement a plan to follow-up and review them. Unfortunately the Toluca Declaration for Habitat III did not reflect what was called for by youth, nor were indigenous people's referenced at all, belying the history of the host city. A follow-up meeting is planned during the Permanent Forum for Indigenous Issues which will again address the issues of youth and indigenous peoples.

Young people around the world, especially indigenous youth, are actively fighting for a more sustainable future in their own capacities. As this proverb goes, "We do not inherit the land from our ancestors, we borrow it from our children." The time is ripe for more sustainability-conscious urban development, one that is inclusive of all populations, especially the most marginalized.