How can we help reduce the soaring income inequality that threatens the stability of our democratic society, or, at the very least, strikes millions of Americans as a key injustice.

While a global tax on capital might be a great idea, even ideas that seem easier to implement -- like a U.S. minimum wage increase or international Robin Hood tax on financial transactions -- have had a ridiculously hard time getting off the ground.

So until the day such sweeping changes are put into place, what's a U.S. citizen to do? Here are some ways that you -- yes, you! -- can start to make a difference today, both for yourself and others.

1. Go vote: Getting more lower-income Americans to the polls could go a long way toward reducing income inequality. As it stands now, poorer Americans tend to vote less frequently than wealthy Americans, making it all the less likely that elected officials will enact laws that could narrow the gap. Meanwhile, studies have found that countries with mandatory voting across all classes tend to distribute wealth more equally.

But even with better voter turnout, poorer Americans still face an uphill battle. Policies favored by the poor are seldom enacted by the government without the support of richer Americans, a recent study found. And with recent Supreme Court cases further favoring those with existing wealth, it's become even harder for lower-income Americans to have a voice in politics.

2. Get the most out of your tax return: The IRS reported this year that nearly a million Americans have yet to collect their tax refunds from 2010, often because low-income earners don't make enough to require filing a return even though wages were withheld from their paychecks. That means $760 million worth of refunds may end up in the U.S. Treasury instead of the wallets of working Americans. C'mon, people! Maximizing tax refunds through deductions and other credits, such as the Earned Income Credit for low-income Americans, can help level the playing the field.

3. Claim the welfare benefits you're entitled to: Programs like food stamps and unemployment insurance have kept millions above the poverty line, but many people aren't taking advantage. During the Great Recession, only around half of the Americans who were eligible for unemployment benefits claimed them, while in 2012, $5 billion worth of food stamps went unclaimed in California alone.

4. Save a couple bucks per day: "It doesn't feel like if you save $5 today it could possibly have any impact on income inequality, yet it does," Michael Norton, a professor at Harvard Business School and the recent author of "Happy Money: The Science Of Smarter Spending," told HuffPost over the phone. "It's a longer term behavior that you can start doing today in a very small way and it will have huge pay off later."

A recent chart from JPMorgan Asset Management shows that someone who begins saving in his or her twenties is likely to end up with a great deal more than someone who waits until later in life: 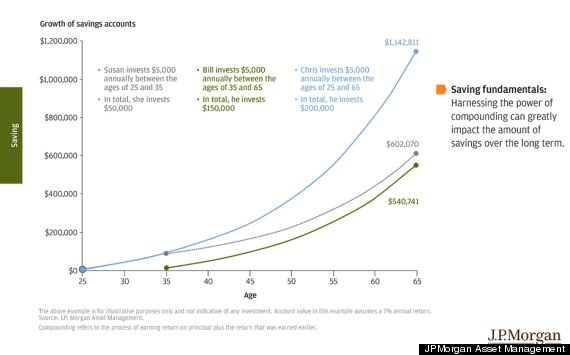 5. Help your friend get a job: If you're employed, you may be in a better position to help your friend find a job than you think. Studies reveal that most people get jobs through networking. What's more, companies are increasingly relying on employee referrals to fill positions.

6. Get married: Getting hitched can reduce income inequality in a variety of ways. For one, couples who get married tend to come from wealthier backgrounds. But they are also better off because marriage enables couples to cut down on costs, as well as receive tax and Social Security benefits. By the time they are in retirement age, married couples have an average net worth that is more than triple that of their single counterparts, according to the Census Bureau.

But there is a catch: A recent study found that marriages between people with similar economic backgrounds can actually make inequality worse.

7. Try to stay out of debt: "The best way for people to get more financially successful is to reduce debts," Dan Ariely, Professor of Psychology and Behavioral Economics at Duke University, told HuffPost. Research has shown that as income inequality rises, so too does debt. Lower earners tend to borrow more money in an attempt to keep up with their wealthier neighbors, often with disastrous effects. "We can't really hope for any improvement until people basically close their debt."

8. Tip your server, every time: There are 10 million restaurant workers in the U.S. that earn a federal minimum wage of just $2.13 an hour, before tips. Tipping, therefore, is essential to keeping a lot of Americans out of poverty.

9. Support early childhood education: Helping kids learn early in their lives can be a primary means of reducing income inequality over the long term, studies show. Students with a solid foundation of skills are more likely to attend college and, in turn, earn more.

Providing universal pre-K programs may be up to the government, but helping one of the many organizations dedicated to promoting early childhood literacy can have an immediate impact.

10 States Where Income Inequality Has Soared