Widening income inequality has been a thorn in America's side for some time now. Turns out, other countries in the developed world aren't exempt from it, either. Yes, even Sweden.

In a new report, the Paris-based Organisation for Economic Co-operation and Development (OECD) finds that since the mid-1980s income inequality has increased in 77 percent, or 17 of the 22 surveyed countries.

Across all OECD countries, the report found, the average income of the richest tenth of the population is now nine times that of the poorest tenth.

Globalization, technological innovation and relaxed regulatory environments have all contributed to the growing gap between rich and poor, the OECD found. The report pays special attention, though, to the changing formation of families, pointing to research showing the income inequality has risen in the U.S. as a result of growing numbers of single-headed households.

Globally, household income has increased overall by 1.7 percent annually, the OECD found. But not all income levels have benefited equally. The world's bottom decile of earners saw their income grow annually by only 1.4 percent in the last 30 years or so, while the top decile grew at an annual rate of 2.0 percent.

Countries at both extremes of the inequality spectrum are moving closer to the center. Mexico and Chile, which together have the two highest levels of inequality, have seen the gap between rich and poor narrow in recent years. But surprisingly, it's in the historically egalitarian countries of Denmark, Germany and Sweden that the divide between the rich and poor has widened most in the past decade.

This isn't just an issue of poor versus rich, however. The middle-class has largely been left behind too: "The highest 10% of earners have been leaving the middle earners behind more rapidly than the lowest earners have been drifting away from the middle," the report's authors write.

Capital income, or income derived from wealth not work, has been a particularly notable source of rising inequality, the report notes, widening more than wage inequality in two-thirds of surveyed countries.

Still, capital income remains a relatively low percentage of overall income at 7 percent. On Monday, though, Paul Krugman noted that 400 people alone accounted for 10 percent of all U.S. capital gains income in 2007.

With the exception of France, Japan and Spain, wages of the rich have grown more than those of poor since the mid-1980s, the report finds. That has something to do, according to the OECD, with the declining number of average hours worked by low-wage workers, even in comparison to also declining hours worked by the high-wage workforce. Only in Greece and the United States, the report finds, have the average number of hours worked risen for the bottom quintile while declining for the top. (See below chart): 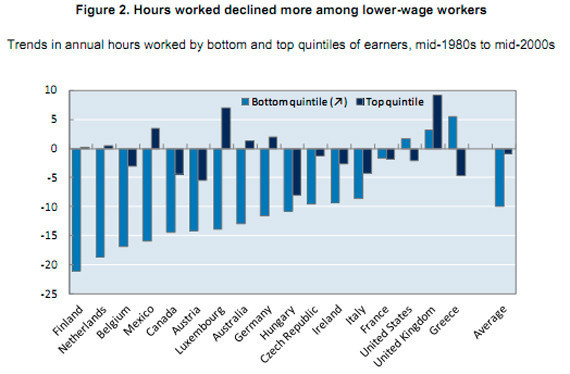 The below graph shows where inequality has risen, where it has fallen, and by how much since the mid-1980s: 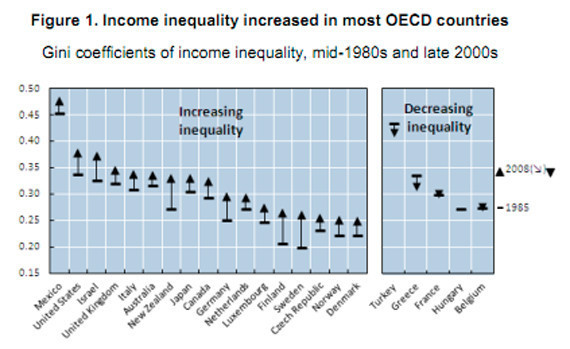 GROWING INCOME INEQUALITY IN OECD COUNTRIES: WHAT DRIVES IT AND HOW CAN POLICY TACKLE IT?