The rich just keep getting richer -- not only by gobbling up more income, but also by paying less in taxes. That means less support for the poor, who are getting increasingly poorer relative to the top one percent.

One chart in a new study of income inequality in developed nations, published by the National Bureau of Economic Research, puts this in stark relief. It shows that the more top tax rates are cut, the greater the share of national income that is mopped up by the wealthiest citizens.

And of course perhaps no country illustrates this better than the United States, which is at the extremes of income inequality and tax cuts for the wealthy, as you can see in the chart below. The only other nation that even comes close is the United Kingdom, which was hijacked by "trickle-down economics" at about the same time as the U.S., back in the 1980s under Reagan and Thatcher. (Story continues below infuriating chart.) 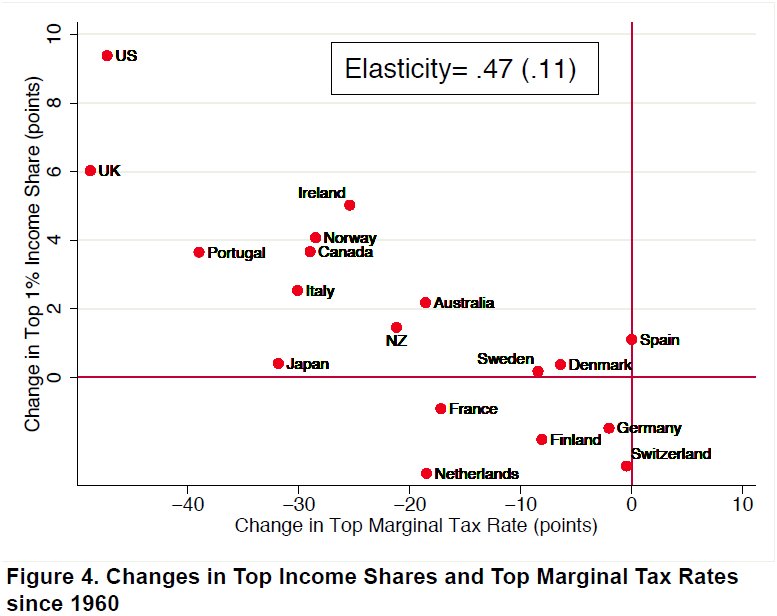 The U.K. has cut top tax rates more aggressively than the U.S. in the past few decades, but the U.S. still has a lower top marginal income tax rate -- 35 percent, compared to 50 percent in the U.K. And income inequality is far worse in the U.S., where the top one percent of households gets a fifth of all the nation's income. In the U.K., the income share of the top one percent is less than 15 percent.

Slashing top tax rates has had none of the positive effects on economic growth that the supply-side economists promised us, the NBER paper points out. Instead, it has just worsened income inequality.

There are other factors driving income disparity, including a rise in investment income (think stock dividends) compared to earned income (think wages). The recently soaring stock market, helped along by the Federal Reserve, is only pushing investment income higher. Wage income, in contrast, has been stagnant -- making income inequality even worse.

As if that weren't enough, investment income is typically taxed at lower rates, further amplifying the disparity. That means this chart doesn't begin to tell the full story of just how little the top one percent are paying in taxes. Mitt Romney isn't paying 35 percent on most of his income. He's calling his private-equity income "carried interest" and paying just 15 percent on it.

While Congress frantically finds ways to slash spending to close budget deficits, it has shown little interest in tweaking the tax code to make it more fair. Efforts to impose a minimum tax on millionaires, as Warren Buffett has suggested, have gone nowhere, as have efforts to do away with low carried-interest income tax rates. President Obama this year made permanent many of the top-rate tax cuts of President George W. Bush, while a payroll-tax cut that most benefited the poor was allowed to expire.

Similarly, U.S. companies aren't paying anywhere near the 35 percent statutory tax rate they complain about all the time, pushing for even lower rates. They shelter their income offshore and find other loopholes to slash their tax bill, helping reduce the share they contribute to federal coffers.

With corporations and the wealthy paying less and less of their share, the burden of protecting society's most vulnerable is falling more and more to the people who can afford it least.