Hey, who says America is in decline? The U.S. is still more awesome than the rest of the world at making at least one thing. And that thing is income inequality.

A new paper by economists Facundo Alvaredo, Anthony B. Atkinson, Thomas Piketty, and Emmanuel Saez lays out just how much better at making inequality the U.S. is than everybody else and tries to explain how it got that way.

Since the 1970s, the top 1 percent of earners in the U.S. has roughly doubled its share of the total American income pie to nearly 20 percent from about 10 percent, according to the paper. This gain is easily the biggest among other developed countries, the researchers note. You can see this in the chart below, taken from the paper, which maps the income gains of the top 1 percent in several countries against the massive tax breaks most of them have gotten in the past several decades. (Story continues after chart.) 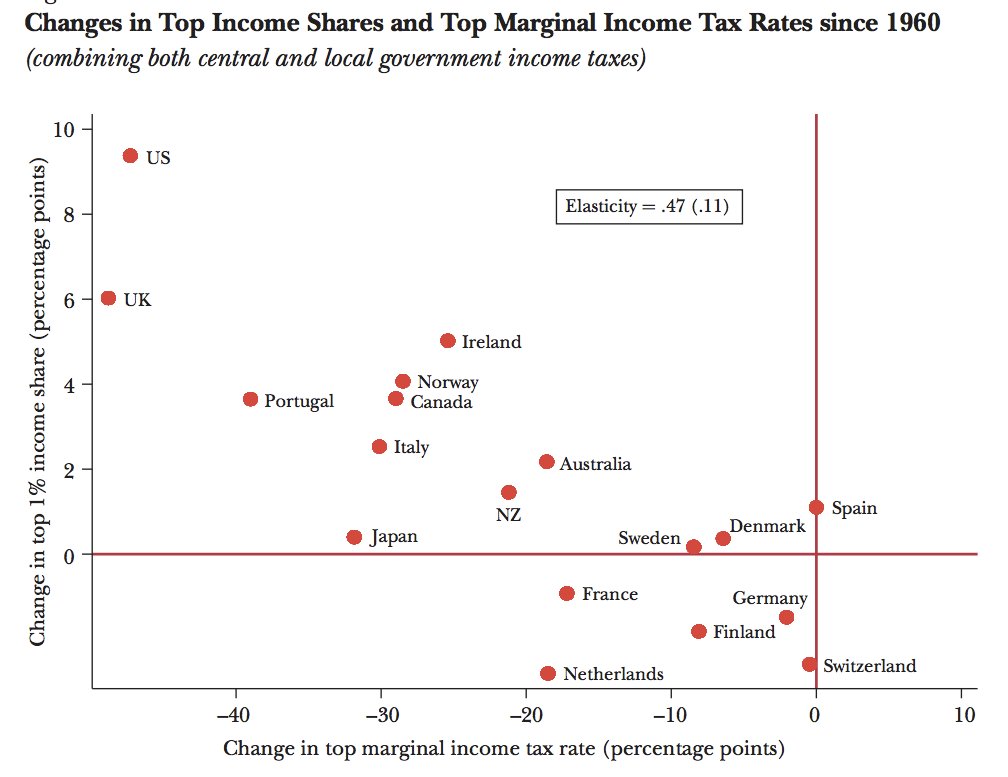 The higher the dot, the more income inequality has grown in that country. See the red dot waaaay up in the left-hand corner, far away from everybody else? That is the United States, where the top earners have made more while getting their taxes slashed by over 40 percent.

This echoes an OECD study from earlier this year that found the U.S. had the highest income inequality in the developed world. It followed only Chile, Mexico and Turkey among all nations.

So how did America get so darn great at ratcheting open the chasm between the haves and have-nots? Thank the dynamic duo of Wall Street and Washington, which have been working so well together for the past few decades to make laws that favor banks. Turns out this Axis Of Making It Rain has also been making laws that favor the exorbitantly wealthy. Win-win. Unless you are poor, in which case: Sorry, be born to richer parents next time, maybe?

One thing you'll notice in this chart is that, typically, the bigger the tax cuts given to the 1 percent (the horizontal scale on the chart), the bigger the income inequality. This is consistent with other studies that have shown the tax code has a big effect on income distribution. That's one way Washington has boosted inequality: By slashing taxes on the rich, for freedom and growth and trickling down on the poor. Unfortunately, the paper points out, contrary to what you will hear from conservatives, lower tax rates on the wealthy offer no obvious benefits to growth, or to the poor.

One other thing you'll notice from the chart is that the United Kingdom has slashed taxes on the top 1 percent almost as aggressively the U.S. has, and yet the share of income going to the top 1 percent is not nearly as big. So there's something else going on here besides just tax breaks.

That something is Wall Street, more or less, as Matthew O'Brien of The Atlantic points out. The same politicians that have busily been slashing taxes on the wealthy have also been loosening fetters on banking, allowing the financial sector to swell to bloated size and mop up ever-more income while contributing ever-less back to the economy. Again, this is consistent with other studies that have attributed much of the rise in in inequality to the pay being sucked up by bankers and overpaid CEOs.

At the same time, U.S. lawmakers have also made it easier and more tax-friendly for the wealthy to pile up more capital gains on their investments. As O'Brien puts it, "The top 1 percent leveraged itself to the market, and haven't looked back."

One nifty benefit to having nine metric craptons of money is that you can use it to buy politicians to help you craft the laws you like, particularly those that will help you end up with 10 metric craptons of money. The poor and middle class, meanwhile, just get ever more discouraged about the political system and stop bothering to fight it, increasingly turning the whole process over to the wealthy and the politicians they own, according to a recent paper by Frederick Solt at Southern Illinois University. Sound familiar?