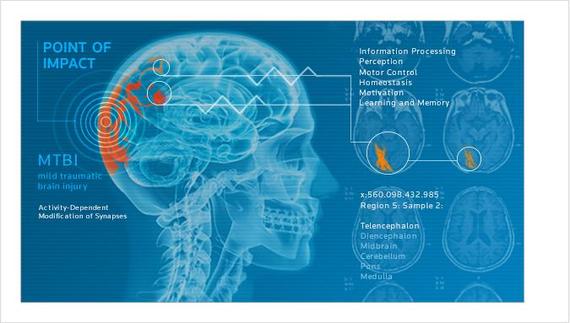 Between the battlefield and the athletic field, the topic of Traumatic Brain Injury (TBI) has been much in the news in recent years. America's protracted wars in Iraq and Afghanistan, according to figures compiled by the Defense and Veterans Brain Injury Center, contributed to roughly 60,000 deployment-related diagnoses of TBI, from blasts and other causes, in US military personnel since 2000. (And that number represents only about 20 percent of the roughly 300,000 overall cases of TBI in the military during that period, due to vehicle accidents, training mishaps, and other incidents).

In the sporting world, American football has also come under scrutiny for its hazards to players old and young--from the cumulative damage of multiple concussions over a long professional career to, as the New York Times recently reported, fatal brain injuries to teenage players.

Even apart from the manifestly hazardous worlds of soldiers and contact-sport athletes, TBI represents a significant health problem in the general population. All told, workplace and household accidents, automobile crashes, assaults, and other causes account for more than 2 million emergency-room visits and contribute to upwards of 50,000 deaths per year in the USA alone.

To examine TBI as a research topic, analysts at Thomson Reuters turned to the Web of Science, an online resource that indexes the contents of more than 12,000 journals, conference proceedings, book chapters, and other scientific and scholarly materials. A keyword search on variants of "traumatic brain injury," with an additional component covering "sports" and "concussion," produced a special dataset exceeding 31,000 papers published between January 2001 and June of 2104. From that store of research results, the most prolific and influential players were identified--including papers, journals, countries, and individual researchers--and are featured in a ScienceWatch "Special Topic" report on TBI.

An immediate observation is that, as reflected in the special Thomson Reuters dataset, research into TBI and related phenomena has increased substantially in the last dozen years or so, from just over 1,000 papers published in 2001 to nearly 4,000 in 2013. A similar rise is evident in papers examining concussion.

Among institutions, the University of Pittsburgh, the University of Pennsylvania, and the University of Toronto stand out as heavyweights, each producing more than 700 papers (in the case of Pitt, nearly 1,000) and each garnering more than 13,000 citations (with Pitt, again, tops in this respect, exceeding 16,000 total citations). The latter measure refers to how many times other scientists read those reports and included them in the footnotes to their own papers--a clear measure of significance and usefulness as viewed by peers in the field.

In institutions whose size and output do not match those large university centers (and which therefore lack the advantage in accruing total citations), smaller entities come to the fore according to the measure of citations per paper. This metric tracks how many times, on average, a report from a given institution has been cited, thereby letting smaller producers compete against larger ones on a paper-for-paper basis. Notable by this measure is Henry Ford Hospital in Detroit, which, despite a comparatively modest output of 128 TBI-related papers since 2001, records an average of 37 cites to each. Georgetown University and New York University also register strongly according to the cites-per-paper measurement.

In terms of national concentration, the United States proves to be the most prolific nation in the survey, with more than 16,000 TBI-related papers listing at least one US-based author. This far exceeds the total of 2,100 for next-placed Canada. As with institutions, however, smaller-producing nations make a mark in the cites-per-paper listing, including Scotland, the Netherlands, and Switzerland. Similarly, the most-cited authors, while predominantly representing the United States, also feature scientists from the United Kingdom, the Netherlands, Belgium, and Israel.