Basically, the Obama administration has one shot at doing the things that they were elected to do, and it will come, if it comes at all, in a process called budget reconciliation. You can read more about "budget reconciliation" and how the GOP feels that it's a "violent" Chicago Machine Style Legislative Doomsday Device in greater detail here, but the salient point is this: it's the only process that will allow things like health care reform and cap-and-trade policies to pass with a mere majority, because basically, the Senate GOP plans on filibustering everything forever and ever and ever. That means one day, when the Democrats are in the minority, they too will filibuster everything forever and ever. And so, it's 60-vote supermajorities from here on out.

Here's a chart, via the Center for American Progress, from Norm Ormstein at The American, that shows that if someone had only come up with a "cloture-default swap" to invest in, we'd all be flying to Mars in Richard Branson's space-cruisers right now. 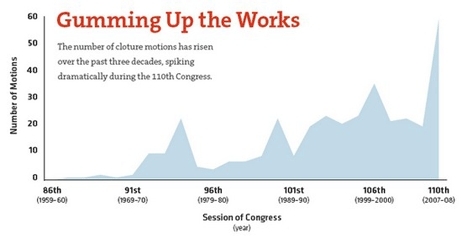 Ezra Klein opines: "If you want to understand why the earth is likely to heat and why comprehensive health reform is unlikely to pass and why the government is increasingly letting the Federal Reserve govern its response to the financial crisis, that graph basically tells the story." But really, that only tells HALF the story.

See, the cure for all the crazy filibustering is the Evan Bayh Hyper-Timid Incrementalist Bullshit Caucus. By their own admission, they don't have policy positions. They don't have to have policy positions! Their job isn't to sell policies on their merits, it's to slowly and inexorably make concession after concession so that the legislation is watered down into something so ineffective that EVERYONE can vote for it.

But yeah, if "you want to understand why the earth is likely to heat and why comprehensive health reform is unlikely to pass and why the government is increasingly letting the Federal Reserve govern its response to the financial crisis," you will need to understand both of these things.

On the plus side, this is exactly the sort of sublime governance that makes David Broder's nipples hard!

PREVIOUSLY, on the HUFFINGTON POST:
Ryan Grim: The Myth Of The Filibuster: Dems Can't Make Republicans Talk All Night