She thrashes like an angry crocodile caught in a net.

"Sienna, calm down!" I say, my frustration near boiling over. "You can't change your diaper by yourself!"

Poop leaks everywhere as she flails. I take a deep breath, wishing we could skip potty training (we still haven't started) and go right to whatever craziness comes next.

"Wanna do it SELF! Cold wipe!"

I take a wipe and place it on her face without even asking her to say, "Please." She grabs it in one hand and starts sucking her thumb. She has a wipe infatuation of late. It's bizarre and annoying, but that's alright. Her body eases and I quickly remove the odious diaper for a clean one. Then I scrub away any poop that leaked on her changing mat, all while thinking of Sienna paraphrasing Bill Pullman's classic line from a certain 1996 blockbuster film starring Will Smith: "Today, I DEMAND my Independence Day!"

We might be less than a week away from the Fourth of July, but Sienna's been in the throes of a sudden independence streak. She wants to do everything herself: open doors; use silverware (if I can actually get her to consume some food); touch the elevator button; brush her teeth; change her diaper; climb into her car seat, etc. Name it, she wants to do it sans help even if she can't and if she's unable to, if she's not old or physically strong enough, she throws wild tantrums that test my patience like nothing before.

It's not that I don't want her to do things on her own. It's my job to teach her to be self-supporting and I think I'm doing OK. But her forbearance is as thin as a spider web and breaks just as easily. I open the car door and immediately she starts yelling, "Wanna do it SELF! Wanna do it SELF!" I remind her of her manners. She whispers, "Please." I let her climb and then wait and wait and wait. Once she finally sits in her car seat, it's a battle because she wants to buckle herself in, but she can't yet. I show her how it's done and explain that it's too difficult at the moment, but she yells and kicks and whips her arms and torso about until I can get that buckle closed. Sometimes a new wipe helps. Sometimes it doesn't.

And then there's eating. She demands to use a spoon herself to eat milk and Cheerios (which I love), except she scoops up a bite or two and then way too often does this: 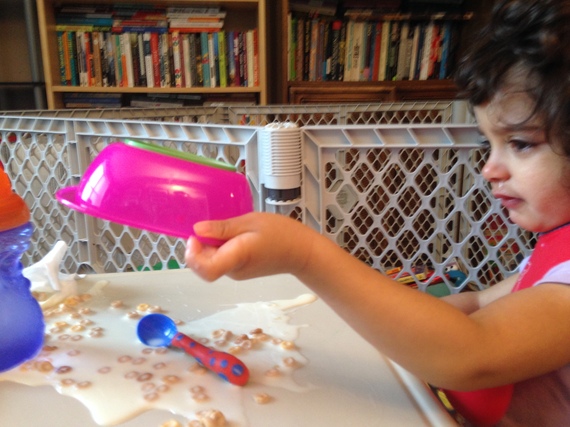 She's testing me. She's testing her boundaries. But at the same time, she's ready to do everything without the help of Mommy and/or Daddy and the slightest impediment causes some sort of toddler hormone to course threw her blood causing tantrums, thrown food and incessant crying.

And I want to get away. Far away. I want to run away from job and my responsibilities as a parent because the "Terrible Twos" are real and they're frightening as hell. I resent her for making me clean up bowlfuls of wasted Cheerios and milk. And then the guilt sets in because I know my little girl just wants to grow up fast and do the same things at the same level Mommy and Daddy can do them. So guilt and frustration rip through my brain because I have to clean up the yogurt thrown across the room and bathe both her and myself after she spits medicine all over the place. I've been reduced to creating memes to express my disgruntlement.

And I count the minutes until I get relief when it's time for Sienna to nap... if she naps. Often, naptime is my favorite part of the day. Is that wrong? On really bad days, I count the hours until bedtime or until my wife gets home and I can get some peace.

Sienna's a few months into age 2. She's growing up. She's talking in sentences. She wants her independence day, week, month, year, life. I get it, but sometimes it gets to me. But then I'll see this and she'll remind me how much I love her: 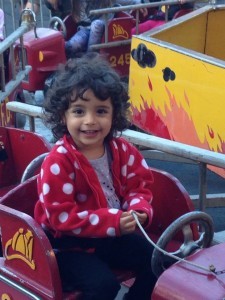 And I'll keep doing my job. I'll teach her and bear the burden of my little girl's frustration at not having the dexterity yet to put on her own clothes or buckle her car seat. Because that's what dedicated, loving parents do.

More:
parents-toddlerspatienceTemper Tantrumsahdraising kids
Newsletter Sign Up
Raise the kind of person you'd like to know
Subscribe to our parenting newsletter.
Successfully Subscribed!
Realness delivered to your inbox