Celebrating the Fourth of July with fireworks dates back to our founding. Without founding father Thomas Paine, however, July 4 might be just another summer day -- no holiday, no fireworks.

Thomas Paine was the brilliant writer whose 1776 essay, Common Sense, inspired his fellow colonists to turn their unrest into action and declare independence from Britain. Another founder, John Adams, once remarked, "Without the pen of the author of Common Sense, the sword of Washington would have been raised in vain."

Thomas Paine's visionary writings embody the spirit of our nation. Perhaps President Franklin Roosevelt was thinking about Thomas Paine and his timeless words when he described Social Security as "a return to values lost in the course of our economic development and expansion." It indeed marked a return to values. Another of Paine's essays, Agrarian Justice, calls for universal old age pensions as well as pensions for people with disabilities -- ideas enacted a century and a half later in the form of our Social Security system. 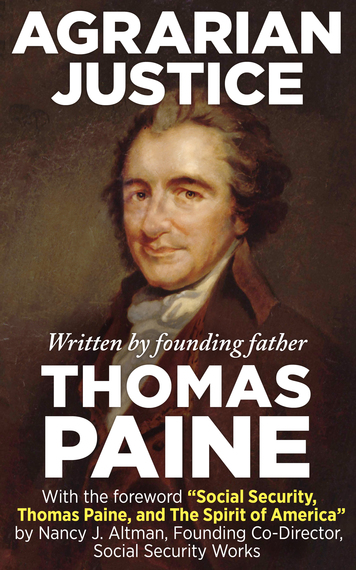 Far-sighted as Paine was, Agrarian Justice also proposes that young adults receive lump-sum payments when they reach the age of 21. Imagine that idea realized: Rather than so many of today's young people starting adulthood with mountains of student loan debt, every American would enter adulthood with money to begin his or her career and family. Perhaps someday we will catch up to Paine's vision for young adults.

But we have caught up with regard to Social Security. As Thomas Paine urged in Agrarian Justice, Social Security's benefits are for rich and poor alike. As Paine explains:

It is proposed that the payments...be made to every person, rich or poor. It is best to make it so, to prevent invidious distinctions. It is also right it should be so...

The universality on which Social Security is based, payments to rich and poor alike, as Paine advocated, is captured in our nation's name, the United States, and in our pledge of allegiance which refers to an indivisible nation, not a land of the rich and everyone else. Social Security embodies the idea that we are one nation, sharing common risks, responsibilities and rewards.

The program reflects other basic American values, as well. Our pledge of allegiance highlights our commitment to liberty and justice for all. A few, outside the mainstream, have argued over the years that Social Security restricts liberty, but the overwhelming majority of Americans understand that Social Security, which provides a guaranteed source of income that one cannot outlive, enhances freedom.

Before Social Security, most seniors, people with serious disabilities and children who had lost parents had no choice other than to move in with relatives. If that wasn't possible, older people and people with disabilities invariably wound up in the poorhouse; children, even those still with a living parent, often were reluctantly placed in orphanages. Today, Social Security provides the freedom that comes with a guaranteed income.

Because Social Security is insurance that is universal and earned, it provides independence and dignity. And Americans understand that the program is just and fair in its design.

Thomas Paine recognized our shared risks of disability and old age (which is a risk in the financial sense). He also understood that we each have responsibilities. Out of that recognition, he proposed a thoroughly modern way to pay for his visionary plan. He proposed a tax on estates.

It is no surprise that Thomas Paine, whose words so embody the spirit of the American Revolution, would understand how perfectly the idea of an estate tax fits within the ideals of our nation. The War for Independence sought to rid America of royalty, aristocracy, and entitled nobility. The founders proclaimed that we are all created equal. Inherited wealth is at odds with the idea of a meritocracy, a nation where all are born with equal opportunities to succeed.

Agreeing with Thomas Paine, the late Robert M. Ball, widely recognized, at the time of his death in 2008, as the foremost expert in the world of the U.S. Social Security system, advocated dedicating the federal estate tax to Social Security.

On April 16, 2015, the House of Representatives passed legislation abolishing the estate tax. With their vote, they have declared that the revenue is not needed to operate the government. If that is the will of the majority in Congress and becomes law, I believe, like Bob Ball and Thomas Paine before him, that the revenues from a federal estate tax could be well used for Social Security.

Expanding Social Security while requiring the wealthiest among us to pay their fair share through a dedicated Social Security estate tax is a solution to a number of challenges facing the nation. An expanded Social Security would ameliorate the looming retirement income crisis, where too many workers fear they will never have the financial wherewithal to retire. It would improve the economic security of working families. Moreover, requiring the wealthiest estates to pay a reasonable tax would begin to slow and reverse the rapid rise in income and wealth inequality.

Thomas Paine explained that his proposed payments, financed by an estate tax, would make the United States shine brighter as a beacon of freedom to the rest of the world:

Already the conviction that government by representation is the true system of government is spreading itself fast in the world. The reasonableness of it can be seen by all. The justness of it makes itself felt even by its opposers.

But when a system of civilization, (growing out of that system of government) shall be so organized that not a man or woman born in the Republic but shall inherit some means of beginning the world, and see before them the certainty of escaping the miseries that under other governments accompany old age, the [spirit of government by representation] will have an advocate and an ally in the heart of all nations.

An army of principles will penetrate where an army of soldiers cannot; it will succeed where diplomatic management would fall: [not even]...the ocean...can arrest its progress: it will march on the horizon of the world, and it will conquer.

That "army of principles" is as powerful today as it was at the founding of the United States. Embodied in those principles are the very values that are embodied in our Social Security system. We are one United States, with one Social Security system where we share risks and responsibilities. We value freedom and justice, including the justice of the wealthiest paying their fair share. We believe in reward for hard work, as well as in the dignity and equality of each of us.

Expanding Social Security, and paying the costs partly through the estate tax or another progressive tax, will reinforce those values and strengthen Thomas Paine's "army of principles." Doing so will, as Paine observed at the nation's founding, generate for the United States "an advocate and an ally in the heart of all nations."

Social Security is as American as fireworks on the Fourth of July. This summer marks the eightieth anniversary of its enactment. To celebrate the birthday, let's do what past generations have done. Let's fight to expand Social Security for all Americans and demand that millionaires and billionaires start paying their fair share.