Forty-two percent of Americans now say they're political independents, a record high for the last 25 years, according to Gallup. With 31 percent of respondents identifying as Democrats and 25 percent as Republicans, the shift is mainly at the expense of the GOP, which has dropped 9 points since the party's peak in 2004.

The movement in party identification doesn't represent a seismic change in Americans' views, however, so much as an increased unwillingness to be tethered to either party, especially the GOP. When Gallup asked those independents whether they leaned toward one side, just a fraction -- about 10 percent of Americans -- described themselves as purely independent. The rest leaned equally toward one party or the other, with 16 percent expressing more of an affinity for the Democrats, and 16 percent for the GOP.

The difference between partisan-leaning independents and their brethren among the party faithful tends to blur at the ballot box. In 2008, 90 percent of Democratic leaners went to now-President Barack Obama, and about 80 percent of Republican leaners to Sen. John McCain (R-Ariz.), according to exit polls.

"Most independents are closet partisans," political scientist John Sides wrote in 2010, pointing to data that shows the opinions of independent leaners closely track those of their preferred party. "As far as their views of Obama are concerned, it doesn’t really matter whether you say you’re a Democrat or an independent who leans Democrat, and the same is true on the other side of the aisle."

With leaners included, the changes in party identification look considerably more gradual. The percentage of pure independents is nearly identical to where it stood in 2010. The Democrats' 6-point advantage over the GOP, while a significant improvement since 2010, is well within the range of variation during the past two decades. 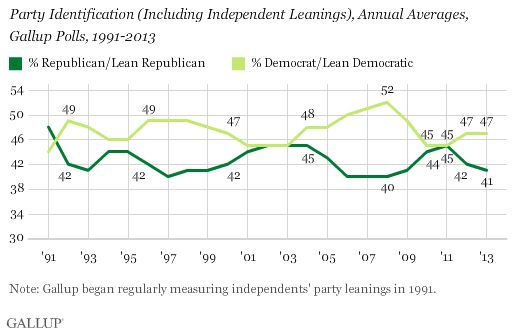 Why are Americans, even those with partisan views, seemingly more reluctant to affiliate themselves with a political party? Political scientists cite reasons ranging from wanting to view oneself as independent-minded to simply hoping to avoid being hassled by campaign operatives. Gallup's Jeffrey M. Jones partially attributes the shift to the fact that 2013 wasn't an election year, and partially to rising disaffection with both parties, and a general mistrust of the federal government.

Both parties are currently deeply unpopular, but the Republican Party, with an average favorability rating of about 27 percent, has a particularly pronounced image problem. In 2013, Republicans were significantly more likely than Democrats to rate their own party unfavorably. About 39 percent of all tea party supporters identify as leaning Republican, rather than as members of the GOP, a Pew Research survey found.

Gallup's results are based on more than 18,000 interviews conducted during the course of 13 polls taken in 2013.

America's Record Number Of Independents Aren't As Independent As You Might Think
U.S. State Capitol Buildings