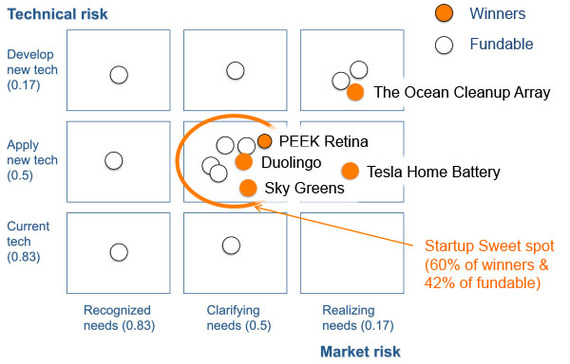 Announcement of the INDEX: Award is much more than a loud rally for promoting high-impact and beautifully formed design solutions. The Index Award is backed by the largest monetary design award and guides the most promising finalists from design solution to business opportunity, with $460,000.00 currently distributed among five winners, PEEK Retina, Duolingo, Tesla Home Battery, Ocean Cleanup Array and Sky Green.

Startups valued at over one billion dollars are called 'unicorns' and chasing them is a futile pursuit, which raises the question, - might one's odds of gaining membership into this exclusive club be increased by being a Design Driven Startup?

Since 2011, only 104 (0.4 percent) of successful fund raising startups, mostly from the US, have turned out to be unicorns according to the Wall Street Journal article on startups, August 2015. Since few startups accomplish raising any funds at all, this represents a very small number of all startups indeed.

Studies from the Kauffman Foundation show that lower valuated startups offer better returns. This suggests that a large diverse portfolio containing lower risk ventures, when aggregated, can pave the way to unicorn earnings without the unicorn risk and that risk mitigation is all about portfolio management.

This deceptive world-view ignores the multiplying effect of market, technology and execution risk. If one has a reasonable fifty percent probability of success on each of these parameters, one's combined probability of success is effectively twelve-an-a-half percent (50% x 50% x 50%=12 ½%), a third less than is usually acceptable to venture capitalists (18%). Because of this, the optimal risk position is actually about in the middle between low and high market and technology risk and not at the extremes on either end.

Analyzing INDEX: Award winners, as well as, potential fundable ventures show a clear relationship between design quality, as measured by nine Design Quality Criteria (DQC,) and the probability of being selected. The average applicant was rated at fifty percentile, the average finalist rated among the top twenty percentile and the actual winners rated within the top one percentile. These ratings were consistent with DQC scoring and, thus, are a strong indicator of INDEX: Award worthiness.

For identifying finalists of potential fundable ventures, the range was widened considerably, accepting DQC ratings between the top twenty-five percent with risk positions as low as two percent probability of success and with a probability of success as high as thirty-six percent. Selection of fundable designs was mainly based on the potential market size and impact, which translated into uncertain revenues and those with high risk, still largely resembled that of unicorn hunting.

INDEX: Award winners' average probability of success was eleven percent, a third less of that of finalists, which were seventeen percent. Probability of the average applicant was twenty-four percent, well within what venture capitalists deem as acceptable risk. 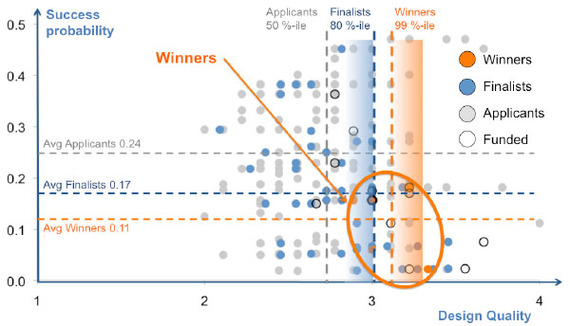 Market, technology and execution risk, together with design quality, although strong indicators, represent only fifty-three percent of the most important factors for venture capitalists. The management team (twenty four percent and scalability (fourteen percent), together, represent another thirty-eight percent.

Management's understanding of design implementation has a strong influence on risk-taking and design quality. Management's ability for self-management also shows an especially strong influence on their perception of the importance of design. This corresponds well to a Danish governmental study, that showed that applying design after the fact, reduced revenue by ten percent. It would thus seem that Design Driven startups could provide an immense opportunity for managing their risk and increasing design quality by an up front implementation of design metrics.