The 7th edition of the annual India Art Fair, held in the Okhla industrial area of New Delhi over a heady four days over the last weekend in January, involved the works of some 1,100 artists from around the world. It was a multifarious display of contemporary art with occasional flashes of brilliance and exquisite nuance. Yet what fascinated me more as an outsider was the Indian public. As Indian art critic Rosalyn Dmello put it: fairs are commercial, democratic spectacles that encompass a wide spectrum of work. 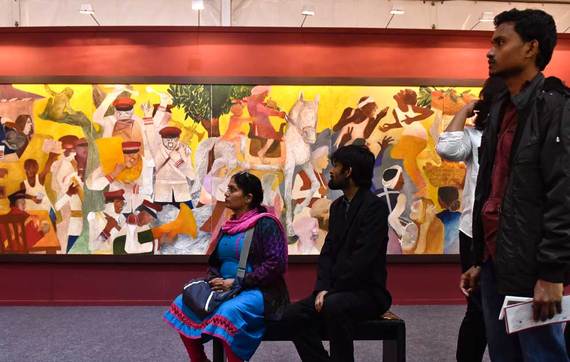 Visitors to the IAF2015 taking in the contemporary art

An estimated 80,000 people visited the fair, of which the vast majority were Indians of every walk of life. Though the numbers were substantially lower than last year's 100,000, several artists and gallerists agreed that there has been a positive qualitative shift in the attendees of this year's fair. Said Chitra Ganesh, who along with fellow artist Dhruvi Acharya did a "painting-as-performance", creating a collage style art piece in full view of the public during the fair:

"It's been a huge gamut, it's become more diverse. It's amazing how many people come, how many people feel they can come. This is actually more interaction than I expected, I think also because our work has narrative and also it's very rare in this day and age in any industry, even in visual arts, to see process. We're so used to seeing just product, a brand. But now they have our visual vocabulary." 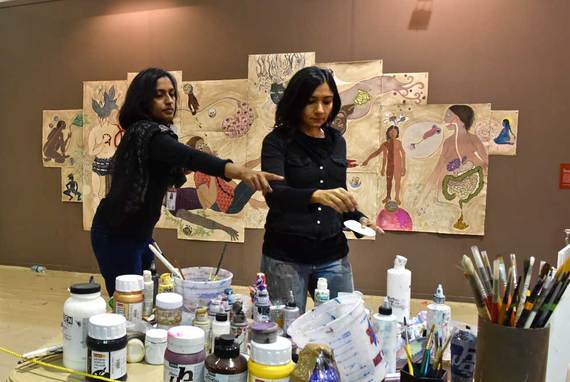 One could conjecture that this sense of engagement of the Indian middle class (surely the greater portion of visitors) is an outcome of greater economic comfort and its attendant leisure, but something more is at play. Take for example the idea of photography as collectible art - a concept which still meets a great deal of resistance in developing Asia, and which isn't helped by the digital revolution in photography. Yet Sunando Chakraborty, deputy director of Tasveer, an arts foundation from Bangalore that features works of international photographers as well as Indian, senses a change in the attitudes of the public and collectors as well:

"I think this fair helps get the idea of photography as art across. At the end of the day people get aesthetics, whether it's painting or photography. As far as collectors go, a lot of people are becoming aware of how collectible photography is. But if you went back 10 years this might not have worked - this is really a reflection of a modern India. People are exposed to a lot more these days. I think we are adding to that."

Geetha Mehra of Sakshi Gallery pointed to the improved discipline of the public and greater awareness when viewing the works on display. This was partly due to what all agreed was the improved nature of the venue itself - more visitor friendly, more facilities. As to the popularity of the stands in the 'contemporary side' of the venue, sculptress Sonal Ambani said:

"Wonderful to see so many people you wouldn't expect at an art fair - That's a very good thing and those are the people I encourage more. The difference between the Delhi Art Gallery exhibition (which featured an extensive, classic museum style presentation of the origins of Indian modernism) across the walkway and this side is that this (the contemporary art booths) is the future: the Apple computers, the information technology, brighter colors etc." 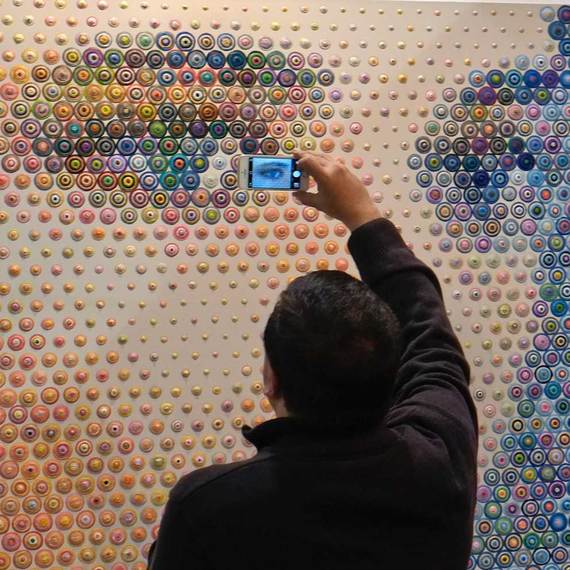 To contextualize this sense of entitlement there is a clear correlation between the exponential growth of the middle class here (expected to reach nearly 18% of India's expected 1.28 billion people in 2015) and the election of an assertive go getter like Prime Minister Modi who has a clear sense of national pride and self confidence. If there was ever a time for a nationalism fueled, international drive to showcase Indian art and culture, this is it.

Beside some gripes regarding infrastructure at IAF 2015, some international galleries felt the Indian bureaucratic hurdles to joining the fair to be prohibitive. Perhaps the international galleries exhibiting here were also put at a disadvantage by the fact that there is less cultural reference for their collections for the general public here, and price point that is above what the regional market is prepared to pay. But from a different, more self-centered perspective, all this might seem a tad irrelevant in view of the caliber of IAF 2015's success within the country.

To look at it from an Indian perspective, various museums were able to showcase their programs to a wide range of the public, a mass audience, to which they previously had limited access (and vice versa) for a variety of reasons. This is certainly in line with the stated priorities of IAF, to quote from their press release:

"India Art Fair is as much about engagement, accessibility and education..."

On the commercial side, Indian and other regional buyers were largely responsible for a sell out in 6 booths; there were 25% more sales overall compared to last year's event despite a 20% drop in visitors; and there were more buyers under 30 years of age than before. Another important factor was not only the presence of galleries from various other cities such as Bangalore in India, but that of buyers from cities like Chandigarh and Jaipur - in short an all India representation from both sides of the counter.

These demographic realities, combined with the fact that more than 100 high profile international patrons of the arts (think Guggenheim Bilbao, Santa Barbara Museum of Art, Art Gallery of New South Wales) attended, clearly indicate that Indian contemporary art as a cultural force is riding a steadily growing wave and that the market represented here is not negligible.

By one insider's estimate some 60% of the work exhibited was of Indian origin: something contemporary of 'their own' that India's upcoming, connectivity obsessed, iPhone toting middle class is beginning to take interest in, and possibly take pride in as well.

documentary photographer and writer working in Asia since 1979