To mark the year's end, NASA just released the "Top 15 Space Station Earth Images of 2015" selected by its Johnson Space Center's Earth Observations team. All 15 are spectacular, most are thought-provoking, but one in particular is sad.

The photograph is a nighttime panorama that shows one of the few -- possibly only -- major international borders on Earth that can be seen at night from space.

The bright orange line in the photo above is the border between India and Pakistan. It is bright because India has fenced and placed high power floodlights across more than 1,200 miles of its 2,000 mile border with Pakistan. It is sad because while the floodlights glow bright each night, some 237 million Indians live without electricity each day.

Of course, we live in times when the idea of building fences and walls along borders has become quite popular. Not withstanding the evidence that walls and fences do little to make anyone more safe, every country has a right to secure its borders as it sees fit. India just seems to like the idea of fences more than most.

With plans to also illuminate it eventually (and some portions already floodlit), India's eastern border hosts a project even more ambitious that this. Indian Prime Minister Narendra Modi is bent on completing the 2,000 mile long double razor-fence along its border with Bangladesh that has been in the works for a quarter century now. Murmurs of also fencing off some parts of India's border with Nepal have now begun to surface. 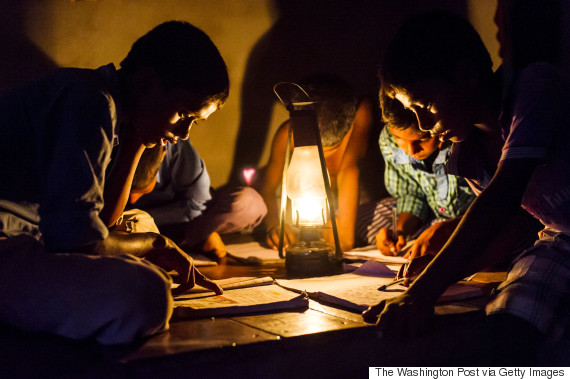 Boys study by lantern light in a house in India in a village where there is no electricity. Simon de Trey-White for the Washington Post via Getty Images.

The tall razor-edged fences come not only with bright floodlights but also a quarter-million strong border security force, billion dollar construction tab, and a not-insignificant carbon footprint. The stated goal is to keep out smugglers, migrants, terrorists and "miscreants."

Whether the fences have succeeded in this goal is unclear. But they certainly could not stop a Pakistani pigeon that was "arrested" in India in May for suspicion of being a "spy" because of its "Pakistani markings." According to reports an Indian official confirmed that the bird's cavities were inspected but "we found no camera, no chips, no SIM cards."

The bright orange line that one sees on this picture from space is a very real manifestation of the absurdity that is security policy in South Asia. The tit-for-tat logic of security has meant that every country in the region has a military that is bigger than it can afford. And none is more more secure for the bloated military budgets they impose on the backs of their poorest.

The bright orange lights that NASA astronauts photographed seem even brighter because they are surrounded by thick darkness. Not because there aren't people living near that border, but because most often those are the very people who are condemned to energy insecurity in the name of national security.

One wonders what solace these bright floodlights give to the 237 million people in India who live without electricity every day. Or to the 60 million Bangladeshis or 50 million Pakistanis who do the same.