NEW DELHI -- India is in the throes of general elections and it become de rigueur for the world media to trumpet the spectacle. India's elections are arguably the greatest democratic show on earth. Some 814 million voters speaking 1,652 languages will vote in 900,000 voting centers across the country over 35 days.

But in celebrating this undoubted achievement, there is also a tendency to overlook increasingly electoral abuse.

The phenomenon of thugs paid by parties and protected by lawyers capturing voting booths and the bribing of voters with liquor and money have always plagued India's elections. Now, parties are also indulging in clever electronic fraud that overrides India's electric voting machines and bureaucratic subterfuge that deletes the names of thousands of voters from voter lists.

Such Warren Zevon-esque brazenness was once shrugged off as logistically inevitable given the scale of India's elections. It was also considered statistically irrelevant to overall outcomes. But now the opposite is true. Electoral malpractice is growing, and more importantly, having a deeper impact on the final outcome of elections.

This is because elections are much closer contests than before.

Up to the 1990s, India's elections results were generally decisive with wide majorities. But recent results have been close with winning coalitions getting wafer-thin majorities. The current Congress Party-led UPA coalition has a parliamentary majority of just 9 seats in India's 543 seat parliament.

What's more, in the last election the win/loss margin in 114 constituencies was less than 4 percent.

Such narrow margins mean even minor incidents of vote tampering, booth capturing etc. can swing results in 25 percent of all parliamentary seats, ten times the government's own majority.

Yet, no one is seriously addressing the problem. The stakes are too high.

In 1989, the much-touted Bofors scam that felled the Congress government of Prime Minister Rajiv Gandhi involved bribery to the tune of Rs 63 crore ($10.5 million in today's dollars). Today, the ruling Congress government is accused of telecom, coal and other scams totaling a staggering $75 billion!

Party and government officials are also estimated to have made even more billions by participating in shady real estate and other business deals and covering up betting, prostitution, money laundering, bootlegging and banking rackets.

Little wonder that Indian voters' sacred and hard-fought right to elect their own leaders is being compromised by politicians working tirelessly in cahoots with thugs and pliant bureaucrats.

The problem begins with electoral funding and the ever-expanding role of "black" money or dark money.

The biggest cost of a campaign is "buying out" local representatives. A parliamentary constituency usually covers 5 to 6 state constituencies and several municipal constituencies. While some of the politicians holding these local and state positions are loyal to their party, many are on sale to the highest bidder.

For example, in the eastern Bihar state, the Hindu nationalist BJP openly boasts that 50 state legislators from the opposing JDU party are colluding with it.

Hence, the first thing any astute campaign manager does is "buy" as many local and state representatives as possible because they control local vote banks.

Huge rallies where half a million people cheer candidates in practiced unison cost upwards of Rs 3 crore ($500,000). And every major party holds at least one major rally a day.

Then there is the cost of sending thousands of workers out in cars, trains, planes, rickshaws, bicycles, bullock carts, tractors, camels, horses and boats to woo voters with speeches, street plays and songs.

These party workers set up makeshift stages and carnivals in the farthest corners of the country and seduce voters with liquor, currency notes, and all-night parties where semi-nude girls gyrate to Bollywood soundtracks.

Naturally, the Election Commission's overworked and underpaid accountants can do little to audit these expenses. After all, what really is the cost of getting a party's symbol painted onto the side of an elephant?!

Private experts estimate India's current elections will cost parties a stupendous Rs. 30,000 crore ($5 billion). That's almost the cost of a U.S Presidential election. The difference is that most of the money spent in India will be in the form of untraceable cash. Much of it will have been brought back into the country from tax havens, such as Switzerland, where industrialists and politicians stash their illicit fortunes.

In fact, just prior to elections in India the rupee usually strengthens as it has in the last few weeks because money stashed illegally in Swiss banks is brought back into the country through the hawala route and havens such as Mauritius. 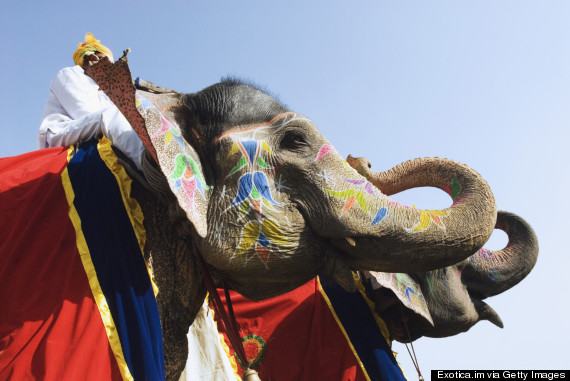 The sheer abundance of cash is now corrupting more and more of society. Where India was once known for its ferociously free press, numerous newspapers and TV channels now give local candidates coverage only in return for payment, a phenomenon called "paid news."

It has spread so widely that investigations found some of India's leading politicians, such as Congress's Ashok Chavan and Milind Deora, guilty of the practice. A sting conducted by a TV even showed how parties pay pollsters to stack surveys.

Several channels and newspapers, as also individual editors and reporters, are also reported to have received millions in dark funding from political parties and/or wealthy candidates, bringing public faith in media to a new low.

In the days just prior to voting, parties also send trucks laden with liquor and cash to the poorer sections of towns and villages to buy votes. Local police who act on the orders of the government in power usually try to clamp down on the opposition parties' "booze buses." But this sparks only violent melees and mini riots.

That is why most parties keep an unhealthy number of local toughs on their payrolls. In urban war zones, they often intimidate voters from even venturing out of their homes. In feudal rural areas, upper caste militias threaten lower caste voters with beatings, rape and torture if they elect the wrong candidate.

Often, these musclemen wielding swords, shotguns and homemade bombs frighten local election officials away from poll booths. They then commandeer the booth's electric voting machines (EVMs) and vote repeatedly for their party's candidate. If rival toughs show up, there are scuffles, fistfights, maybe even a few bombs hurled. A softer version of this is when party workers enter poll booths and start giving illiterate voters lessons in how to use the relatively new EVMs. "This is how you do it," they say as they select their party's symbol, knowing that the machine will not register the choice the voter later makes himself or herself.

Of course, the bigger fraud on voters is that hundreds of thousands are simply turned away from poll booths because their names get deleted from voter lists. Even in Mumbai, the BJP says more than two hundred thousand voters simply disappeared from voter lists. In remote villages, such problems often go entirely unreported.

Though India's Election Commission penalizes the handful of people ever found guilty of such crimes, the punishments are often merely slaps on the wrist. For example, after Deora was found guilty of "paid news" he was merely made to pay the paper its advertising rate for the article. And the paper itself faced no punitive action.

With some politicians privately saying parties are corrupt simply because they need black money to fight elections, it has been suggested that India adopt government-funded elections.

But experts dismiss that proposition as a waste. They argue that the only reason politicians are willing to spend huge amounts on getting elected is because they know they can make much more once they assume office. And that won't change just because the public picks up the tab for their campaigns.

Naturally, public cynicism is rising and faith in politics is at rock-bottom. It doesnt help that both the Congress and BJP have been accused of receiving political illegal funding from overseas sources and both admit that almost 70 percent of their funds have come from nameless, untraceable cash donors.

Public anger over all this initially fuelled the rise of the new Aam Aadmi Party (Ordinary Peoples Party). It is essentially crowd-funding its campaign and relying on volunteers instead of muscle men to reach voters. But it, too, has been accused of illegally receiving funds from the Ford Foundation and being backed by some of India's politically savvy industrialists.

Through all this, some Indians cling to the warm and fuzzy notion that the country is slowly but surely fixing itself and improving its imperfect democracy. Indeed, several steps the government, Supreme Court and Election Commission have taken have done much in this regard.

The introduction of EVMs is often touted as an example. Stricter enforcement of "good conduct" norms has also helped. Politicians are now fined for provocative speeches, campaigning without prior permission and announcing sops close to polls.

But all this is just a drop in the bucket. When India's election results are announced on May 16, many in this nation won't be sure whether it was their votes, or black money, guns and booze that determined who will run the world's largest democracy.