India's commitment to free speech has been cast into the spotlight yet again after two women were arrested over a Facebook post this weekend.

According to the Times of India, a 21-year-old woman was arrested on Sunday over comments she made on her Facebook account criticizing the shutdown of the city of Mumbai following the death of politician Bal Thackeray.

A friend who had "liked" the comment was also arrested.

The BBC reports that Mumbai was brought to a standstill following the death of Thackeray, a "controversial Hindu nationalist politician," on Saturday.

Thackeray, one of the most divisive figures in Indian politics, was blamed for inciting tensions between Hindus and Muslims and was revered by his followers.

News of his death saw businesses shutting and taxis staying off the roads amid fears of violence by supporters of the right-wing Shiv Sena party he founded.

However, while the politician's supporters mourned his death, many others were reportedly "angered by the inconvenience to commuters" and took to social media sites to criticize the shutdown, the BBC adds.

In her Facebook comment, the 21-year-old woman, identified by the Hindustan Times as Shaheen Dhada, wrote: "People like Thackeray are born and die daily and one should not observe a 'bandh' [shutdown] for that."

According to the Times of India, the woman and a friend who had "liked" the comment were arrested "for hurting religious sentiments." They were released on bail a few hours later.

The newspaper also reports that "though the girl withdrew her comment and apologized, a mob of some 2,000 Shiv Sena workers attacked and ransacked her uncle's orthopedic clinic" following the Facebook post.

The two arrests have incited outrage among some members of the Indian press, as well as the public, the Hindustan Times reports.

Markandey Katju, chief of the Press Council of India, said on Monday that he was demanding "immediate action against police personnel for arresting the women," the Hindustan Times reports. In an email to Prithviraj Chavan, the chief minister of the state of Maharashtra, Katju warned of "legal consequences" if the official failed to act, according to the news outlet.

"I will deem it that you as [chief minister] are unable to run the state in a democratic manner as envisaged by the Constitution to which you have taken oath and then legal consequences will follow," Katju said.

"To my mind it is absurd to say that protesting against the bandh hurts religious sentiments. Under Article 19 of our Constitution, freedom of speech is guaranteed fundamental right. We are living in a democracy, not a fascist dictatorship," he continued.

Members of the public have also taken to social media sites to express their displeasure:

A girl gets arrested for "liking" a comment on FB. The thought police frm George Orwell's 1984 is no longer fiction. #palghar #freethegirls

A facebook status can get you arrested faster than killing someone now. #freethegirls

As the BBC notes, this is not the first time in recent months that India's commitment to freedom of speech has been tested.

In October, businessman Ravi Srinivasan was arrested for a tweet in which he criticized the son of India's Finance Minister P Chidambaram. He was released on bail but faces up to three years in prison if convicted, the Hindu reports.

In September, a cartoonist was arrested on charges of sedition over a number of anti-corruption drawings. The charges were later dropped.

And in April, the West Bengal government reportedly arrested a teacher who had "emailed to friends a cartoon that was critical of Chief Minister Mamata Banerjee." He too was later released on bail. 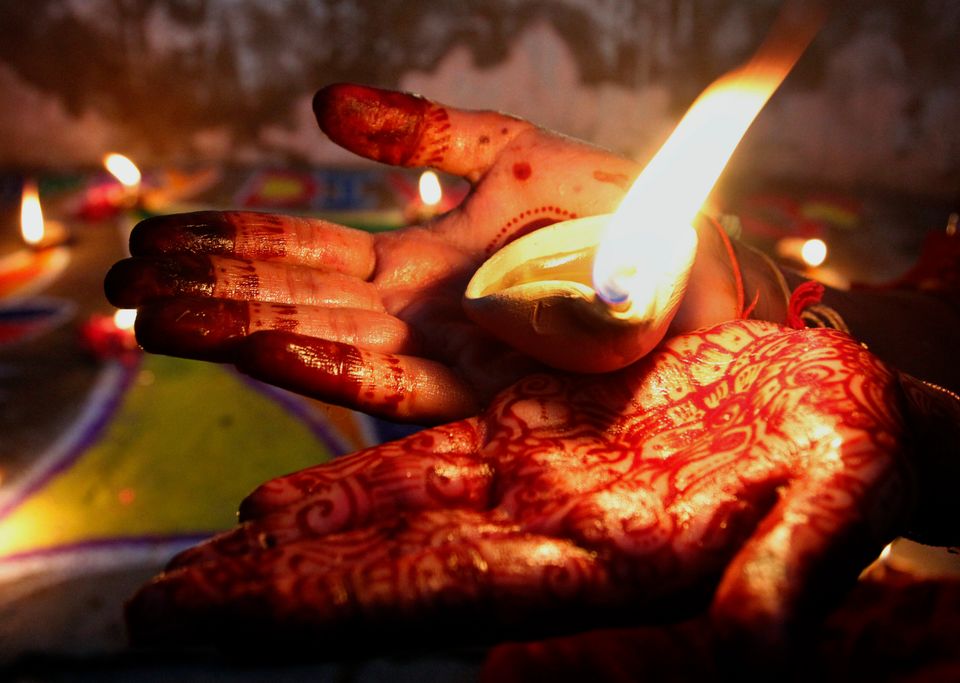 1 / 10
Festival Of Lights - India
A Pakistani Hindu girl holds an earthen lamp while decorating an area of her house to celebrate Diwali, the Hindu festival of lights, Tuesday, Nov. 13, 2012 in Karachi, Pakistan. Hindus across the country are celebrating Diwali, where people decorate their homes with light and set off firecrackers. (AP Photo/Shakil Adil)
AP