I keep hearing from people that the United States is a death denying society. After my recent trip to India I am not sure I agree. Elisabeth Kübler-Ross in her landmark book, "On Death and Dying," brought death to the forefront of the American consciousness over 40 years ago. Today there are numerous books, workshops and research projects examining death and dying.

It is my belief that a major reason for the death denying comment is that due to our diverse backgrounds Americans have a more eclectic approach to grief than more homogenous societies. We don't have set rituals for dealing with death, and for the most part, we can freely express emotions or just choose to walk away. While more ritualized responses to death can reduce anxiety they can also lock the bereaved into rigid social norms.

My daughter Heidi and I recently visited Southern India where a predominant percent of the population are followers of the Hindu religion. During the trip we had the opportunity to discuss grief, loss and recovery with one of our Hindu male tour guides. This was the second guide with whom I had discussed the topic as my husband and I traveled to Northern India a year earlier. At that time, after hearing about the death of our son and our Open to Hope Foundation, our guide asked advice about ongoing grief regarding his dad's death a full ten years earlier. I was so moved by my discussion with him that I wrote the Huffington post blog "Death In India: 8 Things to Help You Deal With Unresolved Grief".

On this trip we were touring the sacred city of Varanasi on the banks of the Ganges River. For Hindus Varanasi is a sacred place where pilgrims visit, bathe and scatter remains in the sacred water. Our guide met us at our hotel an hour before sunset and with hundreds of other pilgrims we headed toward the river. When we reached the banks of the river we crossed a large cement plaza filled with swamies, priests, gurus and beggars waiting for the nightly ceremony honoring the sacred Ganges. We crossed the plaza and walked down a long stairway leading from the center plaza to a waiting rowboat.

We were rowed out into the river by two young boys who stopped a few hundred feet from shore where we, along with dozens of boats filled with pilgrims and tourists, watched the colorful sunset ceremony honoring the river. 'After viewing this magnificent ritual our guide suggested that we move onto the crematorium as it is, "quite dramatic at night". "Dramatic" is putting it mildly. As we approached the cremation site all seemed dark with the exception of a half dozen or so large random bonfires burning in an area smaller than a football field. The area was very busy with men and boys: some standing around the fires, some carting stacks of wood down the hill and others attending to bodies wrapped in gold cloth.

From our boat, which was stopped about a hundred yards from the shore, we could see that the body of a man, face exposed, was being prepared for cremation. He was wrapped in gold cloth and was carried by four men and dipped into the Ganges. He was then put on the ground to drain off the water after which he was placed on the wood pile and then covered with clarified butter and another layer of wood after which the "main mourner" lit the fire. The main mourner could be identified by his newly shaved head and white robe. Our guide said that it takes five to six hours to cremate a body and 700 pounds of wood.

The whole scene was surreal but I was really taken back when our guide suddenly said, "my father was cremated here a month ago and I was the main mourner." At a loss for words, someone in our group actually said, "wow your hair must grow fast". Which, to my relief, he gave a hearty laugh. He said that he was still very sad, but had been told by the priest not to cry as it would interrupt the rising of the spirit into heaven. At this point his voice cracked and he turned his back on the whole scene.

I could describe more fully the ceremony, but the point is that even though a culture provides a set of ceremonies around death, as my guides showed, grieving is a universal human response. It is not something most people want to deal with until they have to. I think denying death until it happens is as natural as is grieving a death.

Below are thoughts on grief relating to the death of my son, both parents and two siblings.

On a personal level it is my hope that you will honor your own grief, develop your own rituals and realize that the one constant variable in grief recovery is time. As always I invite those who have lost hope to lean on our hope until you find your own. Please visit us at www.OpentoHope.com.

Below are pictures taken of the ceremony and the crematorium 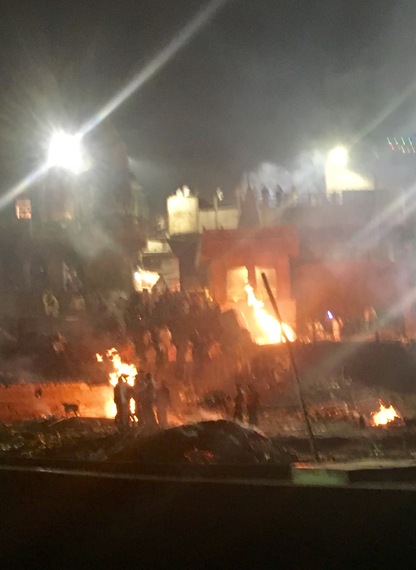 More:
healthy livingdealing with griefIndiaDeathgrief and loss
Newsletter Sign Up