Last month auto workers at the Maruti Suzuki plant near New Delhi were so angry they killed the plant manager, injured a dozen or more Japanese managers, and set fire to the factory. What was going on in that factory?

I asked Rishi Sher Singh that question two days ago. Singh knows the area and the company. He grew up in New Delhi in a Sikh family -- we spoke the day before the mindless shooting of people attending the Sikh Temple in Wisconsin. Singh has worked in the same industrial area where Maruti Suzuki is located, for a supplier to Maruti. 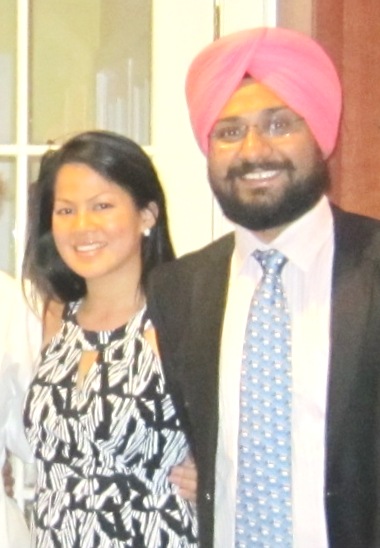 Singh is now based in Bangalore, where last year he ran 22 workshops to train managers in the implementation of workplace standards and management systems for human resources. He is the India Project Director for the New York-based non-profit organization Social Accountability International (SAI). He is shown at left with Joleen Ong, Communications Manager for SAI.

He was in New York City for planning meetings with SAI staff (disclosure: I have been married to SAI's president, Alice Tepper Marlin, for 41 years). My questions follow with Singh's answers:

John Tepper Marlin: I was shocked at the violence of the workers on July 18 and by the apparent lack of communication that it indicates between management and workers. Are these reactions merited?

SINGH: Yes to both.

JTM: An automotive analyst in Bangkok believes that the core problem is the "perceived inequality" of India's contract workers, which he calls a "ticking time bomb." Is he right?

SINGH: Yes, that is definitely a key issue, unfairness to contract workers. More broadly, factory managers are not taking enough time to listen to the problems of workers. Stakeholder engagement is very important and there must be a pressure-relief valve for dissent, to prevent it becoming an explosion. Otherwise the pressure builds up.

JTM: What do you think were the major issues that led to the violent worker reaction on July 18?

SINGH: I think there were two major issues: 1) One was harassment. A supervisor called an Indian worker low-caste. The insulted worker responded by slapping the supervisor. The worker was fired. The incident seems to indicate that the plant might have a weak system for handling complaints, especially for filing a report on discrimination and caste-related issues. The insulted worker did not think he had any recourse. What is clearly needed at the plant is a complaint resolution system for harassment and other concerns. 2) The other was wage concerns. Yes, the plant did have a mechanism for addressing wage questions. A big problem is that contract workers are paid as little as one-third what permanent workers get and the company pays them no medical benefits. This is a countrywide problem, because the law is ambiguous. Contract workers are supposed to be used only for peripheral jobs but they are used for core jobs -- they are in fact often doing the same work as permanent workers. Manufacturers are exploiting a loophole in the law. The use of contract workers has doubled since 2000 to 1.5 million workers, and some states under-report the number of contract workers. The central government should be monitoring the state reports, their completeness and the clarity of reporting on the scope and engagement of contract workers.

JTM: How has the company reacted to the violence?

SINGH: Maruti's Chairman quickly declared a lockout. The police have been keeping workers or outsiders from entering the factory and they are exercising arrest warrants for union leaders -- including the union president, Ram Meher, who has said that the violence was started by company-hired anti-union thugs who attacked workers with weapons.The company and Indian police have denied this. So the facts are still being established.

SINGH:Yes, in the automotive region where they are located, all wages are relatively high.

JTM: Management says they plan to reduce the share of workers who are contractual to 20 percent. Comment?

SINGH: Yes, that would help.

JTM: Published reports show that management had warning of worker discontent, with three production stoppages in the past year. The lockout means Maruti is producing 1,600 fewer cars per day. Maruti stock fell 8.5 percent in two weeks and Suzuki Motor Corp. stock fell 6.6 percent. What does this mean in the bigger picture?

SINGH: It might be good for Hyundai and Tata Motors, which sell competing cars. But of course it may have a negative impact on foreign investment in India.

JTM: Is this factory unique, or have other factories seen incidents like this?

SINGH: I wish I could say it was a one-off. But in recent years three other factories in the automotive area had strikes for higher pay and improved status for contract workers. Four years ago the managing director of an Italian-owned plant in the area, Graziano Trasmissioni India, was beaten to death by a group of dismissed employees.

JTM: What is the solution?

SINGH: The factories need to reduce tension and manage conflict on an ongoing basis. They need a means of regular communication between workers and management to get to the root causes of their major issues. Any systematic approach to ensuring this is better than none, but of course I am inclined to encourage the use of the SA8000 approach.

SINGH: The key is SA8000's "management systems" approach to human resources, which seeks to ensure routine adherence to the other eight performance criteria of the SA8000 standard. The systematic approach is much admired by managers who have been trained in use of SA8000, specifically because it helps to sustain compliance. The system also incorporates routine stakeholder engagement, which is crucial for understanding the many points of view of those involved in a supply chain.