India's 2014 election was record-breaking. It was the largest democratic vote the world has ever seen and Narendra Modi won the greatest electoral victory in India in 30 years.

However, the election also reached another disturbing milestone. It brought into power the highest number of parliamentarians with criminal charges in the past decade.

According to a recent analysis of 541 of the 543 lawmakers by India's Association for Democratic Reforms, the country's new parliament has 186 members (about 34 percent) facing criminal cases. The group's previous reports show that the number has steadily risen since 2004.

Even more troubling, most of these charges are for what the association classifies as serious crimes, including murder, kidnapping and crimes against women. In the 2014 parliament, 112 members face such charges, including nine accused in murder cases and 17 in attempted murder cases.

The rising number of suspected criminals in power has dismayed Indian campaigners behind an effort to clean up India's political sphere, which has a long history of links to criminal gangs.

In 2003, the Supreme Court ruled that India's election candidates must provide their criminal, financial and educational records, which are the basis for the association's report. Convicted criminals were barred from office after a 2013 court ruling, which closed a loophole allowing felons to run during drawn-out appeals, the Wall Street Journal reports. 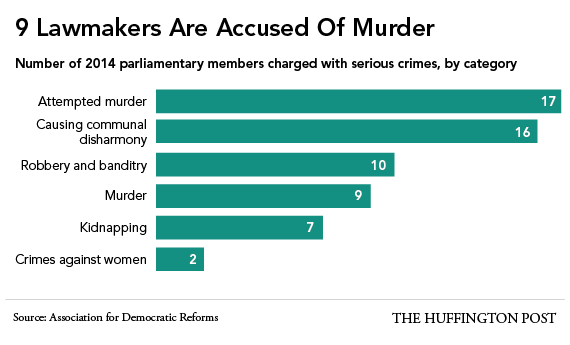 Some Indian politicians defend these staggering numbers by claiming they are the target of politicized charges and pointing out that they have not been convicted. Yet India's ailing court system means that verdicts can be delayed years and even decades, according to the Associated Press.

Meanwhile, the association found that more of the candidates with criminal charges got elected (13 percent) than those with a clean record (5 percent). As elections get more expensive, candidates with criminal connections are attractive to political parties as they often have deep pockets, according to Milan Vaishnav of the Carnegie Endowment for International Peace. Vaishnav notes that voters in India sometimes prefer criminally-connected candidates who have a reputation for getting things done, offering protection, and using whatever means necessary to secure their community's interests.

To break crime's hold on elected office, he said, India will need to tackle larger questions of political party funding, corruption, and the government's capacity to protect its citizens.

The report also showed that this year's elected parliamentarians are significantly wealthier on average than in the past. The average assets declared by elected lawmakers this year is 14.61 crore rupees ($2.5 million) compared to 5.35 crore rupees ($900,000) in 2009, according to the report.

If getting into power is expensive, being in power also pays. Lawmakers who were re-elected in 2014 saw their assets almost double in five years, according to a separate report by the group. 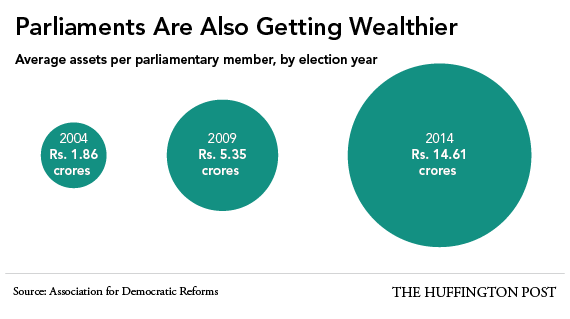