This question has particular urgency in India, the world's largest democracy and home to one-third of the world's extremely poor. This year marks approximately two decades since India embarked on major economic reforms -- and although official poverty rates have declined sharply since then, millions of citizens continue to live in hardship.

Meeting these aspirations will pose an array of challenges for the next government --challenges that require a deeper and more nuanced understanding of poverty.

A new benchmark called the Empowerment Line, developed by the McKinsey Global Institute, aims to create a new and more holistic policy framework for poverty reduction. It calculates the cost for an Indian household to attain the basics and then compares these benchmarks to actual consumption data to measure needs that are going unmet. The results debunk a number of misconceptions about the nature of poverty in India.

Myth #1: Just 22 percent of Indians are poor. This is India's official poverty rate, but it counts only those in the most abject circumstances -- and even a cursory scan of India's human development indicators suggests more widespread deprivation. The Empowerment Line reveals that 56 percent of Indians, some 680 million, lack the means to meet their basic needs. Just above the official poverty line, some 413 million are "vulnerable." They have only a tenuous grip on a better standard of living, and shocks such as illness or a lost job can easily push them back into desperate circumstances.

Myth #2: Food is the biggest unmet need of India's poor. Hunger remains a daily fact of life for the poorest of the poor. But health care, drinking water, and sanitation constitute 40 percent of the population's unmet needs by value. India's national debate on poverty tends to focus on calorie sufficiency rather than these critical services. On average, Indians lack access to over half the health care infrastructure and services they need.

Myth #3: Rising incomes are the key to a better quality of life. This observation is true -- but only up to a point. With higher incomes and purchasing power, people can afford better housing, sanitation, drinking water, and fuel for cooking and lighting. But the ability to spend is only one side of the equation. The poor also depend on community-level infrastructure such as schools and health-care networks. On average, Indians lack access to 46 percent of basic services, and that number soars up to 59 percent for the most deprived districts of Uttar Pradesh and Bihar.

Myth #4: Rising welfare budgets were the most important factor in past poverty reduction. India has been committing more resources to social welfare. Public spending for basic services rose by some 11 percent per year in real terms from 2005 to 2012, eventually reaching $118 billion. But about half of this spending did not translate into real benefits for the poor due to waste, corruption, or simple ineffectiveness. Rising government spending did drive about one-fourth of poverty reduction from 2005 to 2012, but jobs and rising incomes accounted for most of the progress that was achieved.

Myth #5: More subsidies and social transfers can eradicate poverty in the future. The additional consumption required to raise 680 million Indians to the standards of the Empowerment Line is equivalent to about 4 percent of GDP. India lacks the fiscal resources to support a spending increase of this magnitude -- and even if it found the money, its track record of leakage and ineffective spending would limit the gains to the poor. Yet it is feasible to lift some 580 million people over the Empowerment Line in the next decade. Some 90 percent of this impact depends on non-farm job creation, faster agricultural productivity growth, and more effective delivery of services. Policymakers can set this process in motion by focusing on infrastructure delivery, easing the regulatory burden facing businesses, tax and product market reforms, land market reform, labor market flexibility, and workforce skills. These changes can set off a virtuous cycle of growth that generates more revenue, enabling India to meet its fiscal targets even as it ploughs additional funding back into social services.

India has already made striking gains against extreme poverty, but the harsh reality is that 680 million of its citizens live with various forms of deprivation. If the country's recent economic slowdown continues, it is likely that some 470 million of them would remain below the Empowerment Line in 2022, and 12 percent of the population could remain trapped in extreme poverty. But if the new government adopts an ambitious reform agenda and focuses on execution and results, India could be poised to take a historic step forward in its economic and human development -- one that not only eradicates extreme poverty but also delivers better living standards to more half a billion people.

Richard Dobbs is a director of the McKinsey Global Institute based in London. Anu Madgavkar is a senior fellow at MGI based in Mumbai. The report is available here. 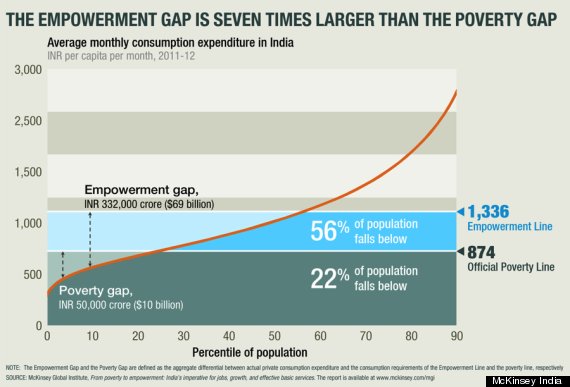 Director of the McKinsey Global Institute based in London