A court in India has ruled that premarital sex amounts to marriage, which has sparked humorous reactions across the Internet and a heated debate over the fundamental relationship between a man and a woman.

The Hindu reports that the Madras High Court ruled on Monday that if a couple of legal age chooses to “indulge in sexual gratification,” this act would confirm the relationship as a marriage. The ruling by Justice C. S. Karnan further stated that the religious affectations that usually mark traditional wedding ceremonies are merely societal formalities and thus not required to legally cement marriage.

According to the New York Times, the judge's statement came after hearing an appeal by a woman who sued her former live-in boyfriend of five years to pay child support for their two children. A lower court had previously ruled the woman was not owed any money because there was no documentary evidence of a legal marriage between the couple. On Monday, Karnan overturned this ruling, stating the couple's sexual relationship was tantamount to being wed.

"If any couple chooses to consummate their sexual cravings, then that act becomes a total commitment with adherence to all consequences that may follow, except on certain exceptional considerations," the ruling states, via the New York Times.

So how many of you today woke up getting married? http://t.co/GWHCtz12iC

Despite how easily the ruling lends itself to punch lines, however, Apoorva Dutt argues on FirstPost that this new definition of marriage and premarital sex may actually be a groundbreaking moment for progressivism in tradition-minded India. While some agree with feminist writer Urvashi Butalia's assessment that the ruling "brings in a morality that should not be there," Dutt thinks argues that it expands the definition and practical applications of male-female relationships, effectively legalizing live-in situations and regarding them as common-law marriage.

The Madras High Court has (inadvertently, perhaps) passed a very progressive and pro-equality judgment in this case. Rather than taking all the fun out of premarital sex by declaring it marital instead (as everyone is cackling about online) they have legitimised a long-term cohabitation which resulted in two children. They have also legitimised the children, who will not have to bear the societal stigma of having been born out of wedlock.

Indeed, the judge seems to have been motivated at least partly by the desire to expand protections for women and children in unmarried situations that might have left them vulnerable under a strict interpretation of marriage law. Following the public outcry and ridicule his statement received, Karnan clarified his ruling on Wednesday as one that "protected Indian culture and welfare of women" and that "had not in any way degraded the system of marriage."

"If a bachelor aged 21 years or above and a spinster aged 18 years or above had premarital sex with the intention to marry and subsequent to this the man deserts the woman, the victim woman can approach a civil forum for remedy after producing necessary substantial evidence to grant her social status as wife," Karnan said, via the Press Trust of India. "This remedy is not only for the purpose of giving relief to the victim woman but also to maintain the cultural integrity of India."

Furthermore, it should be noted that while Karnan's ruling does set a precedent for future cases involving live-in partners, it does not mean that every Indian couple who have sex are automatically married.

"In fact, India does not have any law governing de facto unions that are not recognized as marriage," Meenakshi Ganguly, South Asia director of Human Rights Watch, told the New York Times.

Still, the primacy the ruling places on sex in the definition of marriage and legitimate male-female relationships could become a concern down the road. And despite the fact that premarital sex is on the rise among Indian youths, as reported by the National Confederation of Human Rights Organizations, it was considered a statutory offense in the country until 2010 and is still very much a taboo, the Indian Express notes.

Last year, a Delhi judge condemned the "infamous western cultural product" of cohabitational relationships while sentencing a woman convicted of killing her live-in boyfriend, the Hindustan Times reported at the time. "Despite all the developments granting a level of legal legitimacy to live-in relationship, it is largely perceived to be an immoral relation in our society," the judge said. 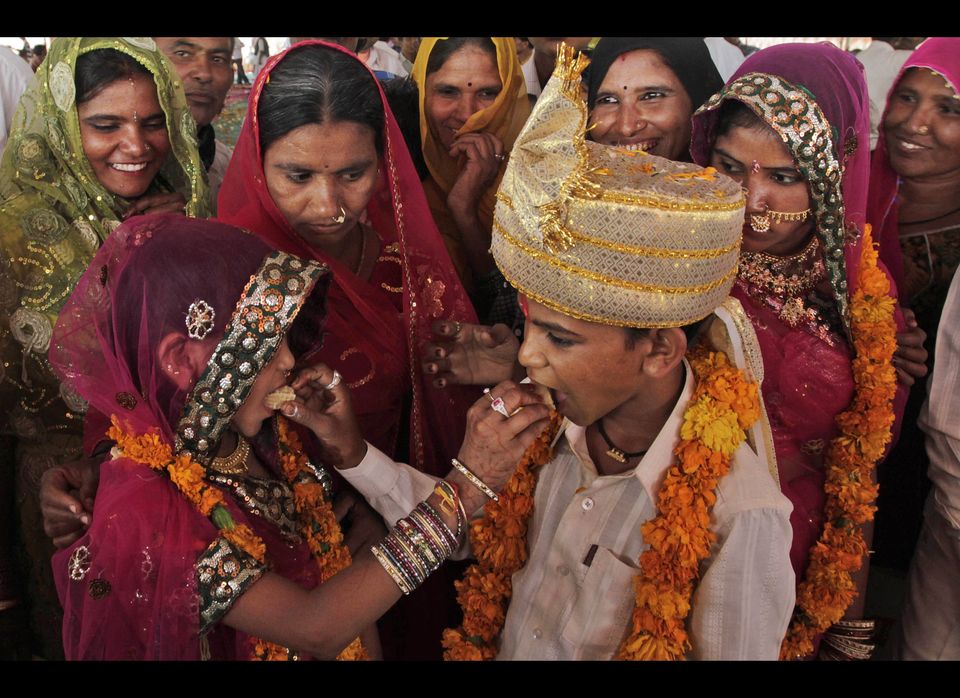 1 / 9
A young Indian bride and her groom share sweets during a wedding organized by a local agency in the village of Vadiya, about 240 kilometers (149 miles) from Ahmedabad, India, Sunday, March 11, 2012. The event, which saw the marriage of eight poor nomadic tribeswomen to eight young men, was organized by a local social assistance group in an effort to prevent the girls from taking to prostitution, a traditionally common source of employment in the village. (AP Photo/Ajit Solanki)
AP