Kolkata, India - More than 380 families lived for generations under a bridge southeast of downtown. They did not own the land where they built shelters; they scratched out a living as leather workers, rickshaw drivers, beggars and rag pickers.

Then this city clogged with traffic decided to rebuild the overpass in the Topsia neighborhood. The families were evicted forcibly and suddenly in November.

Now scattered across the city, with some living along railroad tracks, the families say that several children are missing and that they fear human traffickers have kidnapped them to sell their organs for profit.

Apne Aap, a grassroots organization, sees protecting such vulnerable communities as crucial to its fight against sex trafficking. Founder Ruchira Gupta says marginalized people, especially girls, are the main prey of traffickers; she cites government figures of 1.4 girls trafficked into prostitution in India.

Apne Aap is one of several nonprofit organizations that combat human trafficking by pushing for stronger laws, retraining police units, joining raids on brothels, sheltering rescued girls and helping to prosecute traffickers. Their push comes as the national government responds to large protests over the gang rape and subsequent death of a young woman in Delhi in December.

On Feb. 3, India's president signed an ordinance that toughens penalties for all types of sexual assault and for traffickers, and adds the death penalty for repeat rapists. Parliament, which is in recess, has six months to approve the changes. Some women's rights advocates praised the steps while others said the government had dodged key issues such as marital rape and civilian trials for members of armed forces accused of rape.

About 40 men, women and children from Kolkata's evicted community gathered recently to talk about their plight with our group of students and faculty visiting from New York University. Tinku Khanna and Abhilasha Kumari of Apne Aap translated their comments from Hindi and Bengali. 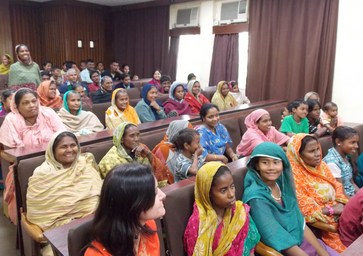 Families evicted in Kolkata say several of their children are missing and may have been kidnapped by traffickers. (Photo by Barbara Borst)

One after another, men, women and teenagers described the problems the community faces and rallied the group to stay united in their demands for a new place to live. They said the compensation -- which they reported as 1,000 rupees (about $20) while some news stories gave a figure several times higher -- was not enough to enable them to rebuild. With Apne Aap's assistance, the families have petitioned the courts to review their eviction.

Taj Mohammad, a former prosecutor, sees weaknesses in India's legal system, including very low conviction rates and the lack of a witness protection law. But he says that civil society groups aid the justice system by raising awareness of victims' rights and strengthening public and political support for the fight against trafficking.

Mohammad was director of public prosecutions in West Bengal, the state where Kolkata is capital. He is now national legal advisor to Apne Aap, which has written a handbook for judges and police on how to deal with trafficking cases and, especially, their victims. He hopes to inspire not just a sense of sympathy but also a sense of justice.

"Rescue is her right," he says of the girls and women who are trafficked. 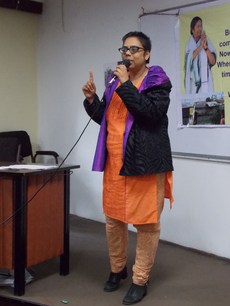 Other organizations, including Shakti Vahini and International Justice Mission, fight trafficking by joining in police raids, training police units and helping to prosecute traffickers. Shakti Vahini is an Indian group whose founder, Ravi Kant, is an advocate at the Supreme Court of India and an advisor to government and the United Nations. IJM was founded in Washington in 1997 by Gary Haugen, a former Justice Department attorney; it has offices in 16 countries.

During a meeting in Delhi, Kant told our group that prosecution can have a big impact even though human trafficking is organized crime on a large and profitable scale.

"One trafficker getting in (jail) saves thousands of children," he said, adding that India has ratified the UN protocol against human trafficking but still needs to improve domestic laws and implementation. Meanwhile, he said, demand for child labor, forced labor and domestic servants is rising, and raids on brothels are driving commercial sex into other venues, such as the Internet.

Shakti Vahini representatives recently accompanied the police on a raid that freed girls just as they were being forced to board a flight to Dubai, Kant said. Despite the scale of trafficking in India, he sees some positive signs as the government and specially trained police begin to emphasize trafficking.

Biju Mathew, International Justice Mission director in Kolkata, said traffickers may be deterred in part because they "are not that brave" and are used to easy money with little risk of punishment. But prosecution is hard, he added, because India's justice system is plagued with police corruption, underfunded prosecutors, unaccountable judges and few social workers.

When IJM joins police anti-trafficking units for brothel raids, it ensures that social workers accompany the victims and that perpetrators are transported in separate vehicles, so they cannot intimidate the girls, he said. It also collects the traffickers' ledgers, serves as witness, assists with victim statements and supports victims who testify in court.

Mathew said judges distrust testimony from police, many of whom are corrupt, and that court cases are notoriously slow moving, taking five to 15 years. IJM urges judges to deny bail so the accused will be motivated to move the trial along.

But rescue is easier than reintegration. Mathew said victims often don't know whom to trust. He recalled a girl rescued in Mumbai and then tricked into leaving the shelter and re-trafficked. It took months of searching to find her; by then she was grateful to be re-rescued. Now, he added, she's studying to become a social worker.