Going home again is rarely an option for girls and women who have been forced into prostitution in India.

Whether they have escaped or have been rescued, their families often shun them. That may be because of the stigma prostitution carries, because relatives and neighbors played a role in the trafficking or for other reasons.

The result is that girls and women need support to establish new lives. Anti sex-trafficking activists see a chance both to help them and to build a broad movement to fight sex trafficking, sexual violence and discrimination against women and girls. During a recent visit to Delhi and Kolkata, our group of students and faculty from New York University had a chance to meet with several organizations and some of the individuals they help.

The courtyard at the All Bengal Women's Union in central Kolkata resounds with the laughter of school children in red, maroon and buff uniforms. They buzz around the visitors, eager to see their own images on our digital cameras, joyfully distracted from classes. 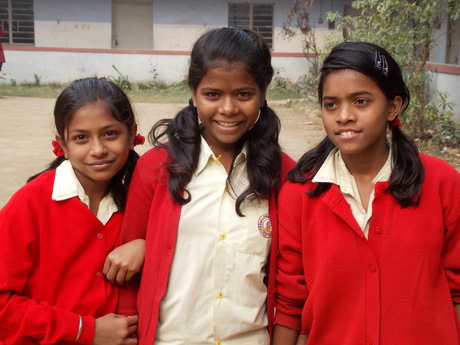 School girls at the All Bengal Woemn's Union center in Kolkata. (Photo by Barbara Borst)

The Women's Union, founded in 1932, focuses on rebuilding lives from one end to the other: It houses a nursery, a school, rooms and job training for teen-age girls and young women, and housing for old women.

Urmi Basu, a volunteer at the shelter since 1997, said the message to women and girls is clear: "You can always come back here."

The current residents include 165 children, 47 young women over age 18, and 23 retired women. Basu said that the Women's Union does not disclose how many were trafficked or rescued, but that many had been. 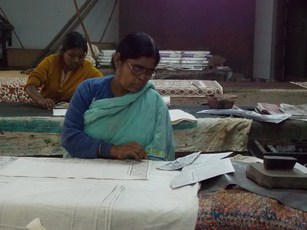 Women learn fabric printing at the All Bengal Women's Union in Kolkata. (Photo by Barbara Borst)

Each month, new girls arrive; those who have been trafficked work with counselors and stay at another site at first. When they are ready to enter the program, the younger ones go to school and the older ones train for jobs such as weavers, fabric printers, seamstresses, midwives and nursery school aides. Some go on to higher education. Some work in the canteen, which offers hearty meals to paying customers. The program helps them to find outside jobs.

Some also find suitors. Basu said the Women's Union has hosted many weddings. Because the girls don't have traditional families to check out the prospective husbands, the center can do that for them. And, she said, it is always ready to take them back if need be.

Sanlaap also runs a shelter in Kolkata for 150 girls who were trafficked. Indrani Sinha says that, 25 years ago when the group started, neither officials nor activists wanted to focus on women in prostitution. She and other Sanlaap founders went to red-light districts to ask women what they needed. Sinha recalls that the answer was: "We are already here, so work with our children." They found many prostituted girls locked in back rooms.

"Restoration, it's a long process. We start with giving them the understanding that they are safe," she said. The girls have learned to distrust others, and some balk at staying in a shelter designed to protect them from traffickers. Sinha added that Sanlaap trains girls at the shelter to "take the hand" of new arrivals and strives to include the girls in deciding their future.

If a girl does return home, the whole family needs assistance to adjust, Sinha said. Meanwhile, for most the focus is on gaining life skills and confidence to make lives for themselves.

Indians have staged several large street protests against sexual violence since the brutal gang rape of a young woman in Delhi on Dec. 16 and her subsequent death. Anti-trafficking activists say the demonstrations also bring attention to their issues, helping them push for better laws, improved police protection and more social programs for the most vulnerable - impoverished girls.

Both Sanlaap and the Women's Union work closely with government programs such as the child welfare department. Other anti-trafficking organizations work with police departments, courts and politicians. For example, International Justice Mission, a U.S.-based group with branches in 16 countries, both advocates for stronger laws and accompanies police units on anti-trafficking raids.

Biju Mathew, director of IJM's Kolkata office, called the pattern "collaborative case work" in partnership with government bodies to offer relief for victims, bring perpetrators to trial and make the justice system work for the poor. The process includes training police on the particulars of trafficking, such as the standards set by the UN Protocol on trafficking in persons.

Apne Aap, whose founder, Ruchira Gupta, organized the India visit for our NYU group, works closely with diverse anti-trafficking bodies -- those that provide shelters, go on raids, link to the wider women's rights movement or work in government.

Trafficking is a process of enslavement, and a highly profitable venture, Gupta says. To fight it takes a movement with many forces working together. It also takes deep understanding of what life is like for the most vulnerable. Gupta builds on the language of India's great leader Mohandas Gandhi when she calls that vulnerable person "the last girl."

Syeda Hameed, a member of the Indian government Planning Commission, said that no one is more invisible to society than a marginalized, trafficked girl. Broad social justice movements are an essential part of Indian politics, she said, and helping that last girl will take the combined efforts of all. 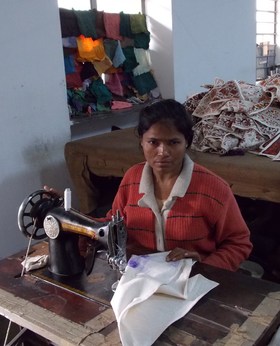 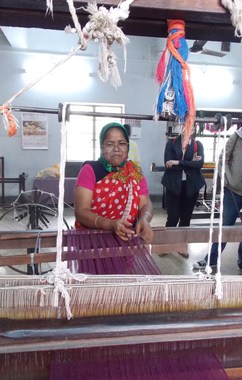 Women learn weaving and sewing at the All Bengal Women's Union in Kolkata. (Photo by Barbara Borst)