Bangalore, India (WOMENSENEWS)-- The holy town of Brindavan near Delhi in north India is notorious for its hordes of destitute widows who have been abandoned by their families and congregate there to wait to die on the banks of the holy river Jamuna.

Most are reduced to beggary or collect coins after singing devotional songs for visitors who come on pilgrimages.

The mistreatment of Indian widows is part of a continuum of sex discrimination that begins with female feticide (although ultrasound for detecting the sex of the fetus has been outlawed) and stretches through bride burning (for dowry) and sexual harassment at the workplace.

Earlier this month, however, something remarkable occurred.

Two women in south India made history on Oct. 7 when they officiated as priests at a famous temple in Kudroli, in the coastal city of Mangalore.

Lakshmi Shanti and Indira Shanti, both widows, became part of a pioneering Kudroli initiative in social reform when they were invited to officiate at the famous Gokarnatheswara temple. This was during the annual Dassera celebrations, one of the most important festivals for Hindus, stretching over 10 days beginning with the new moon in October, which fell on the seventh this year. The temple, now over 100 years old, draws huge crowds of devotees who come to pray to Lord Shiva, one of the trinity of the Hindu pantheon.

During last year's Dassera celebrations widows also participated in the rituals at this temple, but this is the first time that they were allowed to lead the rites in the sanctum sanctorum and distribute holy water to the milling throng of devotees.

Janardhan Poojary, a former union minister who is involved with the temple, was responsible for promoting this initiative. He has said that these two women would be in charge of the worship to the main deities whenever the regular (male) priests were on leave; but would also be free to join the rituals on other days.

Hindu widows are traditionally shunned as inauspicious and barred from social activities. They are not invited to weddings and cannot wear the red kumkum dot on their forehead, one of the symbols of auspiciousness that all Hindu women are required to wear as long as their husbands are alive.

In some communities widows are tonsured (to render them unattractive so they do not "stray") and they wear only unrelieved white. Although tonsure has been given up in the last 50 years, widows are still confined to a life of asceticism and self-denial. In urban areas, however, the status of widows has changed significantly in recent years. They are no longer forced to wear only white and some even sport the kumkum on their foreheads (more as a cosmetic decoration than a religious symbol).

Still, the idea of any women--much less widows--officiating as priests was unthinkable till two decades ago when a small group began to officiate at Hindu weddings in the western state of Maharashtra. But widows; never.

Hinduism is the largest religion in India with about 80 percent of the population. Just as the church's priestly community was, and is, dominated by males, Hindu orthodoxy has always looked upon females as "unfit" and "impure" (because they menstruate and give birth) and barred them from participation in holy observances, especially in temples (where ritual purity is mandatory), except as receivers of benediction.

Social reformer Narayana Guru of the early 20th century was associated with the consecration of the Gokarnatheswara temple in Kudroli in 1912. He urged Hindus to worship without divisions of caste and creed. Entry into temples was forbidden to the untouchable castes until the Indian Constitution abolished untouchability in 1950 after independence. To this day, however, one still hears of low-caste devotees being punished by upper-caste conservatives for entering a temple.

For Lakshmi and Indira Shanti to be invited to conduct the rituals at the temple and offer holy water to the congregation, especially during the important Dassera festival, was seismic.

Clad in yellow silk, with flower garlands round their necks (tradition forbids widows to wear flowers and garlands), they began their official appointment as priests.

The event made a huge news splash around the country.

Vivek Rai, of the department of Indology at the University of Wurzburg in Germany, believes the development could help bring widows from the margins of society and out of their forced segregation.

Widow remarriage was forbidden until legislation was passed after independence, but widow remarriage continues to be seen as scandalous in most communities.

Men can, of course, marry any number of times. In fact, men are urged to remarry if the first wife did not produce a son to "keep the family tree alive."

Throwing Indian Widows Out Onto Streets Isn't OK. These Two Women Are Working To Change That
Holi Festival Of Colors India 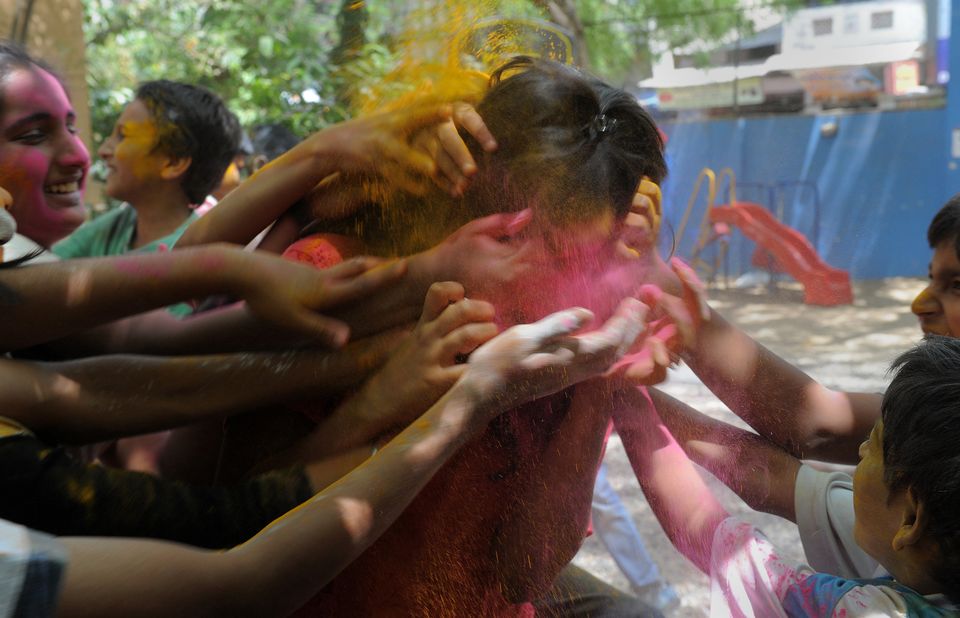 1 / 16
INDIA-RELIGION-FESTIVAL-HOLI
Schoolchildren colour their teacher during Holi celebrations with eco-friendly dry colours ahead of the Hindu festival Holi, in Ahmedabad on March 25, 2013. Many regions of Gujarat state of Western India are in the grip of acute water scarcity owing to last year's poor rains. Holi, the festival of colours, will be celebrated across India on March 27. AFP PHOTO / Sam PANTHAKY (Photo credit should read SAM PANTHAKY/AFP/Getty Images)
Getty Images