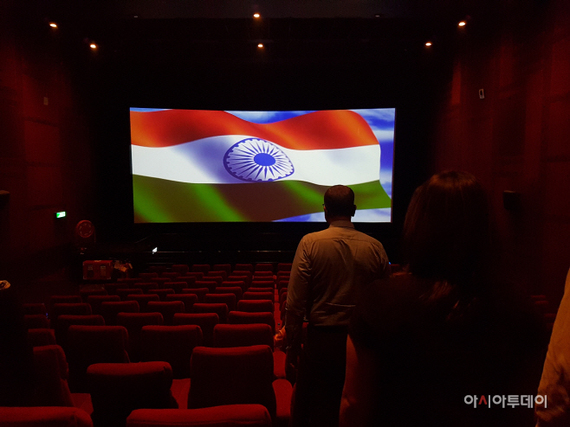 [The national anthem is being played at a movie theater located in a shopping mall in southern New Delhi, India, on Dec. 14. The audience are standing up for the national anthem./ Photographed by Jeong In-seo]

By Jeong In-seo, New Delhi correspondent, AsiaToday - Filmgoers are being arrested and beaten for refusing to comply with a supreme court order to stand for the national anthem at cinemas.

I visited a movie theater in the southern part of New Delhi on Sunday. Most of the seats were empty when I entered the cinema hall. According to a movie theater official, the number of moviegoers on weekdays has decreased significantly since the currency reform. The film was screened with 130 out of 160 seats being empty. 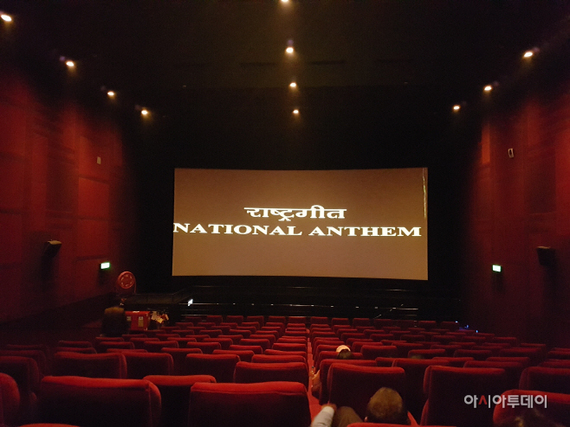 [A message announcing that the national anthem will be played appears on the screen before the film is screened./ Photographed by Jeong In-seo]

Gudu Singh, a 23-year-old IT company worker, said he goes to movie once a week. He said, "We have been singing the national anthem every day since elementary school and we have been always doing it on our legs. Even elementary school students know they have to stand up while singing for the national anthem. It's hard to understand that standing is infringing on freedom and religion. We need to know where we live in."

After the film ended, I asked people outside the movie theater. Ayushi Rina, 21, said, "People might dislike the court's order, but everything is for ourselves."

But not everyone thinks positively about the issue. One audience who asked for anonymity said, "Cinemas playing the national anthem itself is ridiculous. You should sing the national anthem with your heart. But this way, you don't sing with your heart. It's not the right way to punish people for simply not standing up. It will only create resistance." 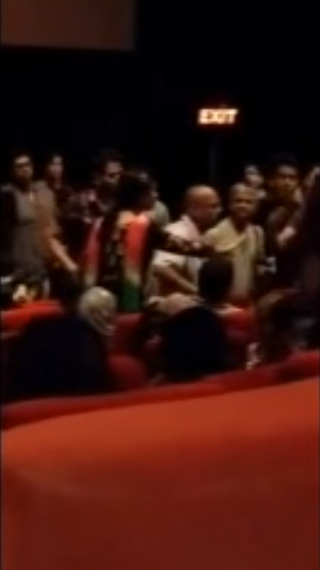 [Three audiences were threatened by other audiences for not standing while the national anthem was being played at a movie theater in Tamil Nadu, India./ Source: a screenshot of YouTube]

Previously, the Hindustan Times reported on Tuesday that twelve people were arrested for not standing while the national anthem was being played at a film festival in Thiruvananthapuram, the capital of Kerala state. The 12 people, most of them in their 20s, reportedly rejected the request of the police officers and the organizers of the festival to stand up. They were released on bail.

On Sunday, three audiences were threatened by nearly twenty other audiences for not standing while the national anthem was being played at a cinema hall in Tamil Nadu. The three who were threatened were booked by police under the Prevention of Insults to National Honor Act. No charges were filed against their attackers.