India does not yet have the economic might that China does, but the country prides itself on being a vibrant democracy, where diverse and discordant political opinions are not only welcome but even encouraged. This of course stands in stark contrast to the single party system north of the Himalayas. "India has too much respect for the lives and human rights of its citizens to implement some of the harsher policies that China does" is a common refrain among bureaucrats and politicians. While there is some truth in that, when it comes to showing a willingness to tackle air pollution to improve its citizens' lives, it turns out India is in fact lagging far, far behind China.

In March of 2013, Conservation Action Trust, Greenpeace India, and Urban Emissions revealed that between 80,000 and 115,000 people die every year from air pollution caused by coal plants. This report thrust the 'silent killer' into the spotlight. Now, a subsequent analysis has compared Indian power plant emission standards with those of China and Japan (see analysis here). It turns out the reason for the high health toll is somewhat obvious and perhaps even more shocking: Indian standards are anywhere between four and twenty times worse than those in China.

That's right, China home to the airpocalypse and 1.2 million deaths from air pollution has stronger coal plant pollution standards than India. The same China that saw pollution from coal power plants blanket major cities this past winter, provoking mass protests and screaming (mocking?) international headlines. In the aftermath, China is now seriously considering banning the use of low quality heavily polluting coal in its power plants. The Indian government, on the other hand, appears ignorant of the very real health toll that coal combustion is taking on hundreds of thousands of Indians.

So just how bad are India's standards? They are quite literally off the charts (Check out the comparison below). That's because India doesn't even have plant pollution standards for sulfur dioxide or nitrogen oxides - both of which lead to deadly Particulate Matter (PM) 2.5 pollution (A quick note: Since India does not have actual standards, the charts below use 'nominal' figures to show what emissions from an uncontrolled coal plant might look like). 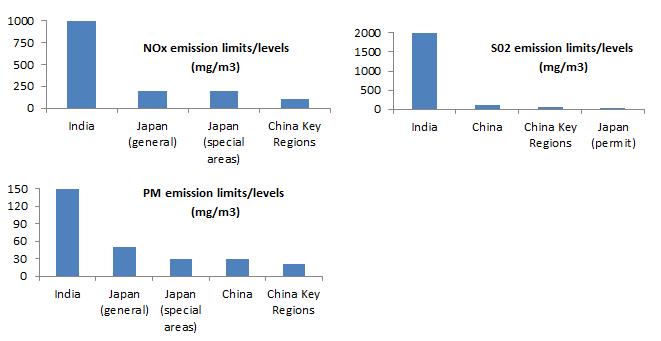 Even worse though, the standards India does employ (for particulate matter) are nearly five times worse than their Chinese counterparts (see the chart on PM emissions referenced above). It's also widely known that monitoring or implementation of these weak standards is next to non-existent.

So to sum it all up - India's coal plant standards are many times deadlier than China's. Given what we know about China and the massive air pollution crisis it is facing, that's downright frightening. This is a country that has already gone down a deadly coal path and is struggling with the consequences not just in terms of morbidity and mortality but social cohesion. China's Nankai University estimated that pollution led to 90,000 "mass incidents" in China in 2011. 90,000!

That's why India's path of increasing coal dependence is so concerning. China currently has roughly 775 GigaWatts (GW) of installed coal fired power plants - almost seven times the number in India (121 GW). Those plants are responsible for almost half of all deadly PM in China. The problem is, instead of learning from China's mistake, India is seeking to replicate it.

Current plans forecast the construction of ~ 500 to 600 GW of coal plants with pollution standards far more lax than those China currently employs. That means before long Indian air quality will be even worse than China's. Not to mention the rampant destruction and displacement these plants and the coal they will use will bring to India's forests, tigers, farmers and indigenous populations or its water supplies.

But therein lies our silver lining: These plants have not yet been built. That means there is still time to avoid China's fate. Already Indian think tanks have called for a complete moratorium on new coal fired power plants due to overwhelming environmental impacts. That may seem a bit aggressive but it's not at all out of line with what many Indian elites are saying about coal these days. Take EAS Sarma, former Minister of Power, "Clearly, it is time for us to halt coal mining to pre-empt further human misery and environmental degradation" or former Minister of Environment and Forests Suresh Prabhu, "Time for a reality check. The present coal-fed centralised energy system will not be useful in the long-run."

With the ministry of coal calling for a freeze on new coal plants all together (due to fuel supply constraints) India now has the opportunity to radically rethink its approach to coal development. 100,000 lives every year depend on that decision with countless more hanging in the balance.