When teacher Christine Ayers talks to her fourth-grade class about numbers and math, she uses examples involving beadwork from the Northern Cheyenne Tribe. When she talks to her classroom about poetry and character education, she reads traditional native stories, which she says generally “teach a lesson.”

Ayers is not of Native American descent, and neither are 50 percent of her students at Linderman Elementary School, she estimates. However, an unprecedented constitutional amendment in Montana requires classroom teachers to integrate information about Native American culture and history in all instruction. Now, Montana is a leader in educating this population of students, and provides an example for how teachers can use culturally aware instruction to promote tolerance.

“These kids don’t really get a mirror to look at,” Ayers told The Huffington Post of her native students. “I think [this instruction] helps both native and non-native kids understand everyone’s culture.”

In 1972, Montana added language to its constitution pledging to use education to preserve the unique cultural heritage of Native Americans. After nearly 30 years of inaction, this pledge was codified with the Indian Education for All (IEFA) Act, which says that every student in Montana, whether native or not, should "be encouraged to learn about the distinct and unique heritage of American Indians in a culturally responsive manner.” Several years later still, in 2005, this act was logistically implemented when the state legislature gave the initiative financial backing.

A small number of states, including South Dakota and Wisconsin, have policies emphasizing the need to teach tribal history in schools -- but no other state has a constitutional mandate about it, said Denise Juneau, the Montana superintendent of public instruction. In 2008, Juneau became the first Native American female in Montana history to be elected to statewide office.

The state provides curriculum resources for educators on teaching this material -- such as the lesson plan resource shown below -- as well as professional development for teachers, although individual districts maintain control over how they choose to implement the IEFA. 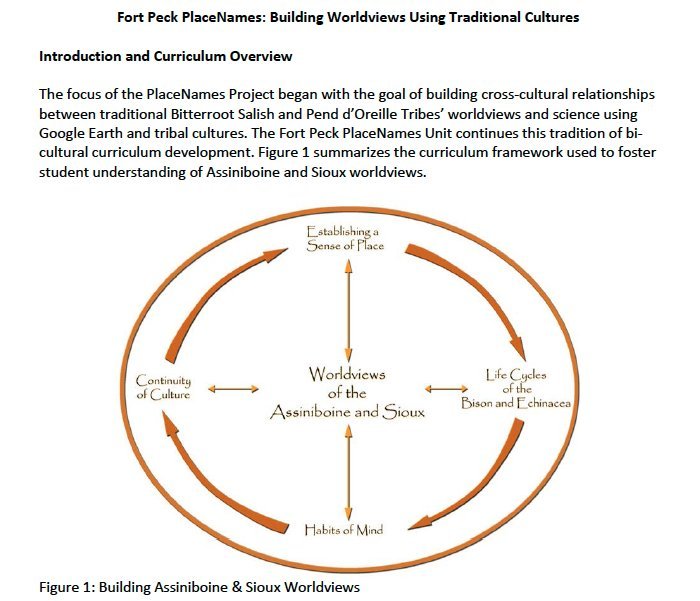 A resource for educators on teaching lessons associated with the Indian Education for All Act.

The 12 tribal nations that inhabit Montana have a rocky history with the state -- something that may be reflected in their students’ low levels of achievement. Nationwide, native students have especially low standardized test scores and graduation rates, and native students in Montana are no exception. Also similar to other native students around the country, most native youth in Montana attend regular public schools, as opposed to government-operated Bureau of Indian Education schools.

“[IEFA] is not solely for American Indian students,” noted Mandy Smoker Broaddus, director of Indian education for the Montana Office of Public Instruction. “It’s probably more broadly intended for non-native citizens in Montana, as we have a complex history. [IEFA] is hoping to develop better understandings among different people.”

There is no quantitative evidence regarding how IEFA may be affecting native students, but teachers and policymakers say they see the act’s impact firsthand.

“[Native American culture] is almost an invisible culture within schools, so students might struggle,” Broaddus said. “We have many, many individual stories of young people who have really responded when Indian Education for All was brought to life in their classrooms.”

“We got to watch classrooms of young people talking about American Indian history -- they were curious and engaged … [When you are] inclusive of any culture really, I think young people by and large are very responsive,” she continued.

Ayers said that nationwide, instruction on Native American culture typically takes a historic bent but that implementing the IEFA pushes teachers to incorporate the topic in other subjects and make it more relevant to students.

“It helps the kids have this sense of, 'We are here and we still need to be recognized and listened to as a group of kids who are striving to do our best and go to college,'” Ayers said.

“We know from both case studies and more informal conversations that native communities believe in Indian Ed for All, and see that it is increasing student confidence,” Stanton said.

“Every time I go to conferences to present on my research, I often get a fairly large following that asks, tell me more about Indian Education for All,” she continued. “States are looking to leadership on this.”

There is still plenty work to be done in terms of further implementing the IEFA and making sure it is being delivered in the most effective ways, Jioanna Carjuzaa, an associate professor of multicultural education, curriculum and instruction at Montana State University, said. Still, she said, there is “no question this is a commitment that as a state we’re all involved in.”