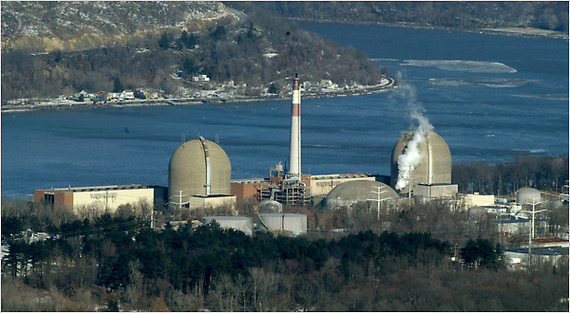 For more than a decade, it has been impossible for operators of the Indian Point nuclear power plant to stop highly radioactive reactor and spent fuel pool coolant from leaking into the groundwater and migrating to the Hudson River.

And despite assurances from Entergy that this time will be different, there is no indication that the company has developed the ability to prevent the latest uncontrolled leaks from following the underground waterway into the Hudson. And because the river is a tidal estuary flowing as much as 20 miles above and below the nuclear site, radioactive contaminants may be sucked into the drinking water systems of several river towns.

While Entergy focuses attention on tritium, a radioactive form of water and the predominant contaminant leaking from the plant's cooling system, the actual leak contains a basket of radioactive elements, including Strontium-90, Cesium-137, Cobalt-60, and Nickel-63 according to an assessment by the New York Department of State as part of its Coastal Zone Management Assessment.

The Coastal Zone Assessment, released November, 2015, expressed concern about the periodic leaks into the Hudson River because it serves as a direct water source for Poughkeepsie, Wappingers Falls, Highland, Port Ewen, East Fishkill, Hyde Park, and the Village of Rhinebeck. It is also a backup water source for some 9 million residents of New York City and Westchester County.
"Tritium," explained David Lochbaum, nuclear safety expert at the Union of Concerned Scientists, "is just the first item reported. It tends to be the leading edge of any spill since it is the lightest and most mobile of the radioactive contaminants. The other isotopes slow down as they go through the soil. That other stuff is on its way, however. Tritium just wins the race."

Indeed, ongoing monitoring by the NY State Department of Health has found detectable deposits of a broad variety of radioactive isotopes above and below the Indian Point discharge site into the fast-moving Hudson River tidal estuary that the Native Americans referred to as "the river that runs both ways."

Indian Point schematics provided by the NRC show the site of the leak or leaks is roughly 69 feet above the Hudson River at the beginning of a groundwater flow that widens to about 80 feet as it rushes downward, pools above the bedrock and then flows inexorably into the Hudson River. Once the contaminants enter that groundwater flow there is no system at Indian Point to remove them. Entergy representatives declined to comment on planned and unplanned radioactive discharges into the environment.

The sequence of events leading to leaks of radioactive liquids from Indian Point 2 is the subject of an intense investigation by federal and state officials. The Nuclear Regulatory Commission dispatched a radiation specialist to Indian Point Thursday to work with the three, on-site, resident inspectors to determine how the leak occurred and whether or not it can be stopped. There are more than three miles of inaccessible piping under the 239-acre site, and the inability of Entergy to properly assess possible corrosion within the pipes has been a key part of the ongoing challenge to the plants' licenses by Attorney General Eric Schneiderman. And Gov. Andrew Cuomo has ordered the state Departments of Health, Environmental Conservation, and Public Service to coordinate investigations into maintenance issues at Indian Point.

Entergy has sought to assure the public that there is no possible danger from the leaking liquids. In their initial announcement that high levels of tritium had been found in three monitoring wells near Indian Point 2, the company insisted that there was nothing to worry about.
"While elevated tritium in the ground onsite is not in accordance with our standards, there is no health or safety consequence to the public, and releases are more than a thousand times below federal permissible limits," the company statement said." The tritium did not affect any source of drinking water onsite or offsite."

That blanket assertion of safety may not be true. 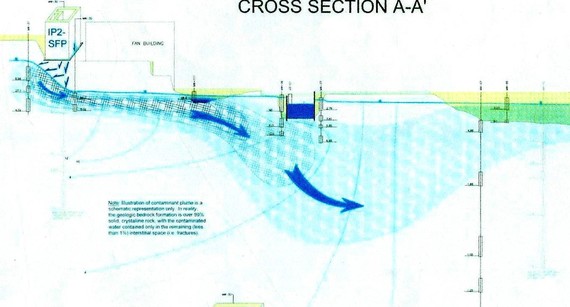 The leaks were first detected Friday in three monitoring wells (30, 31, and 32) between the spent fuel building, the reactor containment building, and the Reserve Water Storage Tank (RWST), a 350,000-gallon stainless steel structure that plays a critical role in the reactor's operation. (http://bit.ly/1KJFA90 ).