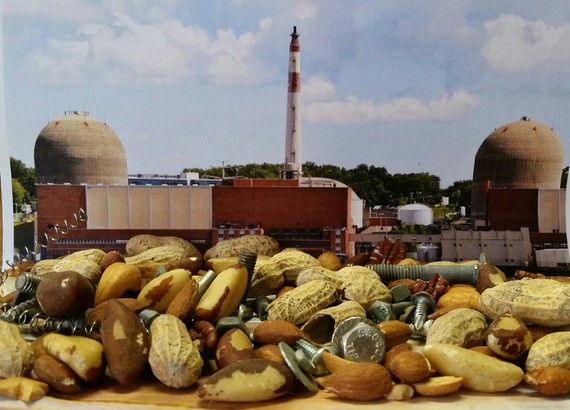 The aging, leaking Indian Point Energy Center has been operating with an expired license since 2013. Since that time it has been lurching from crisis to crisis. The latest is the revelation of failing bolts inside the reactor core.

They're supposed to hold baffle plates in the "core former," a steel structure which surrounds the nuclear fuel in the reactor and directs coolant through the system to keep the core from overheating and causing a meltdown. A special inspection of Indian Point Unit 2, one of two reactors operating at the plant, revealed that 227 of its 832 core former bolts were degraded, broken or missing. That's a 27% failure rate for something pretty essential to the operation of the plant.

This latest crisis is part of a series of malfunctions at Indian Point during the past year. Others included transformer fires and explosions with oils spills, bird droppings causing electrical disturbance in the switchyard, a pump failure resulting in massive leaks of radioactive tritium and other radioactive isotopes into the groundwater under the plant. There have been seven "unplanned outages," otherwise known as emergency shutdowns, since May 2015.

Indian Point's Unit 2 reactor is 42 years old and showing its age. Its operating license expired in 2013. Immediately next door, the Indian Point 3 reactor, now 40 years old, is still actively operating, also on borrowed time. Its license expired in 2015. There is no reason to believe the bolts in IP-3's reactor core are any less damaged than IP-2's. IP-3 should be powered down and inspected immediately, and not restarted until the next planned outage to assess the condition of its reactor.

Both IP-2 and IP-3 have dangerously overcrowded fuel pools. Despite the name, the "spent" fuel rods stored in them are not "spent" of radioactivity. They are very highly radioactive, much more so than before they went into the reactor. Spent fuel emits about 1 million rems (10,00Sv) of radiation per hour at a distance of one foot -- enough to kill in seconds.

Indian Point's fuel pools contain much more spent fuel than Fukushima's did when the tsunami hit. They now contain four to five times the number of fuel rods than they were originally designed to hold. That creates the potential for a spontaneous fuel pool fire at Indian Point that could release massive amounts of radioactivity into the environment. The longer the reactors continue to run and create more spent fuel, the greater that danger becomes.

The growing risks of continuing to operate this obsolete, deteriorating nuclear plant far outweigh any benefits. So why are we running them? Many studies, including a November 2015 NYS Department of State Coastal Zone Management Consistency Determination, have shown that the energy generated by Indian Point is clearly not needed. Studies also show evacuation would be virtually impossible in the event of a catastrophic accident or incident at Indian Point. 20 million people live or work within the "50-mile peak injury zone" surrounding the plant, including all of New York City.

We need deep, immediate investigation of failing and missing bolts inside both of Indian Point's reactors. But one thing is already clear: It is simply nuts to allow Indian Point 's continued operation to endanger millions.