Hate going to the dentist? Probably not as much as Ashik Gavai.

On Monday, the 17-year-old spent seven hours in a dentist's chair in Mumbai, India, to deal with a rare, abnormal growth in his right jaw. At first, doctors weren't sure what they might find, but as the surgery progressed, they were astonished to learn the growth was comprised of 232 other teeth, reports the Times of India. 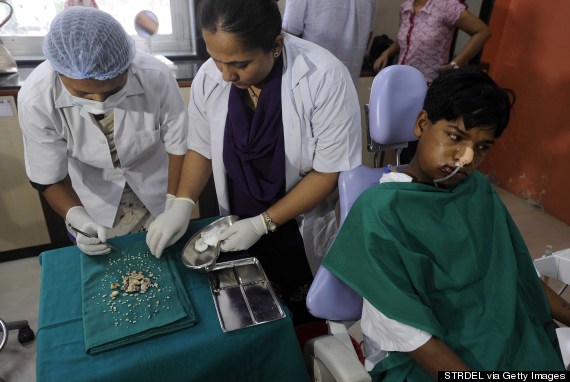 "[The teeth] were of varying sizes, some as tiny as a grain of mustard and some almost the size of a marble." Dr Sunanda Dhivare-Palwankar, the head of the dental department at JJ Hospital, where Gavai was treated, told the paper. "The fact that it was coming from a single molar was very unique."

According to the BBC, Gavai first noticed the growth 18 months ago, but doctors in his local village couldn't pinpoint the source of the problem. Last month, he started experiencing severe pain, prompting a journey to Mumbai.

There, doctors diagnosed Gavai with a complex composite odontoma, a benign dental tumor, which, though it isn't life-threatening, can make eating difficult and cause facial disfigurations.

"I was worried that it [his condition] may turn out to be cancer so I brought him to Mumbai," the boy's father, Suresh Gavai, told the Mumbai Mirror. State government health insurance paid for the procedure, which otherwise would have been prohibitively expensive for the family.

Doctors expect the boy to make a full recovery. "Now, his face has changed and he will lead an absolutely normal healthy life," Dhivare-Palwankar told the Khaleej Times.

Your Stuffy Nose
Shutterstock
Pass the tissues -- and some gum, please. When a cold prevents you from breathing through your nose, you're forced to inhale and exhale through your mouth. This dries out the tissues and reduces the flow of saliva -- the mouths built-in cleanser, which not only rinses away food particles but also neutralizes decay-causing acids and acts as a natural antiseptic to keep bacteria in check. The less saliva, the more bacteria -- and the more potent the odor. An easy remedy (for your breath, if not your cold): Chewing gum -- as long as it's sugarless -- has been shown to increase the flow of saliva.
Your Movie Treats
Shutterstock
Bacteria have a sweet tooth, too. When you eat sticky candy like gummy bears, cherry vines and even mint chews, the bacteria "has a party," says Kimberly Harms, DDS, the consumer adviser for the American Dental Association. It feasts on the sugar and spreads to all areas of your mouth -- including hard-to-reach areas in the grooves of the teeth. But here's a surprise: Dentists have started recommending chocolate as a more healthful alternative to candy. Harms says that chocolate not only dissolves relatively quickly but also has less sugar than other candy, as well as a small amount of calcium to protect enamel.
Your Mouthwash?
Getty Images
Yep. Many brands of mouthwash and antibacterial mouth rinse contain alcohol -- sometimes accounting for as much as 27 percent of total ingredients -- that dries out your mouth, leaving a stale smell after the minty freshness wears off in an hour or so. Look for brands with no or little alcohol and save them for first dates or job interviews (or when recommended by a doctor).
Advertisement
Your Super-Low-Carb Lifestyle
Shutterstock
After a rice-free sashimi dinner or an all-you-can-eat Brazilian barbecue, your body is tasked with metabolizing a high amount of protein. This produces a by-product of ammonia, which, among other places in the body, is released in your breath (fortunately, your dining companions will suffer the same condition). Eating this way on a regular basis -- by following a high-protein diet, for example -- requires your body to constantly excrete these by-products, as well as molecules called ketones, which can cause your breath to smell in a way thats described as rotten fruit -- or just rotten.
Your Gram Negatives
Getty Images
Of all the different types of bacteria that live in your mouth, the most pungent, by far, are a kind called "gram-negative." Not only do they produce gassy-smelling sulfuric compounds, but they also have an extra cell layer that makes them especially resilient. They burrow down below the gum line and hide out in the crevices of the tongue. Flossing helps remove them, but another option is brushing your tongue, which has been shown to reduce bad breath by 70 percent. Clean your entire tongue, especially the back where more there are more peaks (or papillae) and valleys, as well as the cheeks, recommends Gary H. Westerman, DDS, a professor of dentistry at Creighton University. You can also use a toothbrush or a drugstore tongue-brush, but an Orabrush -- yes, the thing you've seen on YouTube -- has longer, softer bristles as well as a scraper to collect the bacteria once it's been dislodged.
Your Anxiety
Getty Images
Your heart is pounding, your palms are sweating, you're practically panting with stress -- and your mouth is probably not smelling that great (argh, dry mouth again!). In addition to taking a few calming inhalations, remember to take several rehydrating, breath-freshening sips of water.
Advertisement
Your Salmon with Aioli Sauce -- but Without a Glass of...
Getty Images
Finally, a cure for garlic breath that doesn't involve forcing your partner to eat the offender with you. Drinking milk can lower the concentration of odor-emitting compounds from garlic in the mouth (and nose), Ohio State University researchers recently discovered. Whole milk seemed to be slightly more effective than skim (due to the absorbent fat) and had the most noticeable results when it was consumed during a meal (although drinking a glass afterward can help, too).