Kolkata, India -- Salma Begum and Salena Begum are clear about one thing: they want prostitution abolished in India.

The two women, who are not related, were forced into prostitution as adolescents. Now in their mid-30s, they are trying to get out. Wrapped in saris -- Salma in orange, green and yellow, Salena in embroidered maroon -- they spoke with our group of students and professors from New York University in Kolkata's Eden Gardens park.

We had spent the morning listening to a debate on whether legalizing prostitution would help protect women and girls. Some women in the sex trade in India are organizing labor unions so that they can demand public recognition and safer working conditions from the brothel owners and pimps who control their lives. On the other side, groups that see prostitution as a form of slavery are pushing to outlaw it and to punish its profiteers and customers while shielding women from prosecution.

The brutal gang rape and subsequent death of a woman in Delhi in December has made violence against women a major public issue in India. Protesters, newspaper columnists and politicians have weighed in. Activists see an opportunity to make progress on pervasive sex discrimination and related issues such as sex-trafficking, poverty and prostitution.

Salena and Salma, part of a women's group trying to build new lives, said they don't want to be recognized as sex workers.

"We are trying to get rid of this profession. We want to stop red-light areas," the women said, speaking Bengali. 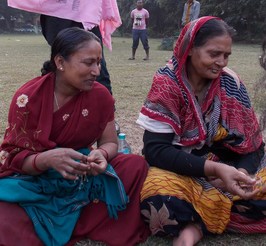 Salena Begum, left, in a maroon sari, still works in prostitution as she saves money to launch a laundry business with Asma Bibi, right, and other women.

Our group spent an evening walking among prostitutes and pimps in Sonagachi, a warren of multi-story brothels in central Kolkata that is said to house about 11,000 prostitutes in one of the densest and oldest red-light districts in Asia.

Motorbikes, stray dogs and drunkards wove through the streets. Vendors cooked snacks under awnings. Women in heavy make-up and vibrant saris or tight jeans and tops stood around eying the crowds. They stared at us. The men around them quizzed us on what we were doing. We did not reply. We took no photos. We watched as customers paid and then disappeared with women down dark alleys or into turquoise doorways.

Our guides were staff members of Apne Aap, a grassroots organization that fights sex-trafficking and works with women from Sonagachi. Ruchira Gupta, the group's founder and the leader of our trip to India, said girls are forced into prostitution in India at 9 to 13 years old, and that government figures put the country's total prostitutes at 3 million, almost half of them minors.

Young girls are kept behind closed doors, often locked in rooms for the first five years of prostitution, according to Apne Aap. The price for virgins runs about $1,000; for adults, it can be as little as $1 per 15-minute session, and as many as 20 customers a night.

As we were leaving Sonagachi, a tiny young woman painted in lavender eye shadow and dressed in a short magenta skirt came running up to share her joy that Apne Aap had helped get her 8-year-old son into a good boarding school. She was 21, proof of how young prostitution begins.

Salma and Salena Begum are in a group of 10 women determined to leave sex work and to open a laundry business together. All are or were in prostitution; they were tricked or sold into it as girls. Although some now work as maids, they still live in brothels because they cannot afford other housing.

Every month each woman puts at least 30 rupees (about 60 cents) in a bank account for their collective project, but they know it will take time because they need at least 40,000 rupees (about $800) to rent a site. Representatives of Apne Aap, who did the translation for us, said the organization would help train and support the women.

Ratnabali Chatterjee, who headed women's studies at the University of Calcutta, said the sex worker movement arose from 1990s AIDS-prevention efforts in Sonagachi that became a model worldwide. The programs hired former prostitutes as community health educators. For the first time, the women felt some control over their own lives, and many have tried to build on that.

For example, Durbar Mahila Samanwaya Committee, known as DMSC, says it has organized 65,000 sex workers into a labor union that fights for rights and respect for sex workers.

Anchita Ghatak, who heads a women's empowerment group called Parichiti, said sex workers want to define themselves, rather than be labeled criminals or victims.

"They don't believe they need to be rescued. They have to be people who can demand their rights," said Ghatak, whose group focuses on domestic servants. She said sex workers seek not to glamorize prostitution but to recognize that it exists and to make it safer.

Women throughout India face sexual violence "in their homes, workplaces, on the streets, everywhere," she said, and poor women have extremely limited choices in life.

Apne Aap director Abhilasha Kumari said any argument that women choose prostitution falls flat "in a country where women are forced to do any kind of labor because they have no options." And Ruchira Gupta questioned whether sex work can be reimagined as a legitimate form of labor given its inherent invasiveness and risk.

When asked about coping with prostitution's psychological impacts, Asma Bibi, 60, the oldest member of the laundry group, said healing "is a thing that is not really possible, but you try and try."

"You come to compromise with it," Sita Debi, who did not give her age, added. "At times you feel unclean vis-à-vis yourself. People think of you as unclean, even if you are not practicing (prostitution)." 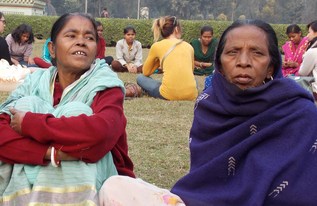 Sita Debi, left, in a turquoise shawl, and Sandhya Das both work as maids today, after years in prostitution in Kolkata.

All the women said they do everything they can to keep their children from being forced into prostitution, even sending small ones away so they do not see what their mothers do.

As the women spoke, another group exemplified what the women have achieved. More than a dozen adolescent daughters of prostituted women met with NYU students, practiced their English, talked about their studies and laughed with joy as they literally ran circles around the visitors in an Indian version of duck-duck-goose.