As Indiana considers whether to legalize a blood-sport even nastier than dog and cockfighting known as coyote and fox "penning"- Project Coyote joined the Animal Legal Defense Fund and the Animal Welfare Institute in filing suit against the Indiana Department of Natural Resources (DNR) and its director Robert Carter Jr. over the Department's decision to waive state permit requirements for a controversial Greene County coyote and fox penning facility.

Legal in at least 19 states, "penning" involves sending packs of domestic dogs into a fenced enclosure to chase to exhaustion and often tear apart a captive coyote or fox. Prior to release into the enclosures, wild coyotes and foxes are trapped in the wild with leghold traps, crammed into cages too small for movement, and shipped -- often hundreds of miles -- with little or no access to food or water. They're then sold into penning facilities where pen operators make money by charging a fee to predator hunters who bring their hounds to train on "live bait" as the these terrified, disoriented and exhausted coyotes and foxes become when they are released into an unfamiliar fenced enclosure and dragged down by packs of hunting dogs. 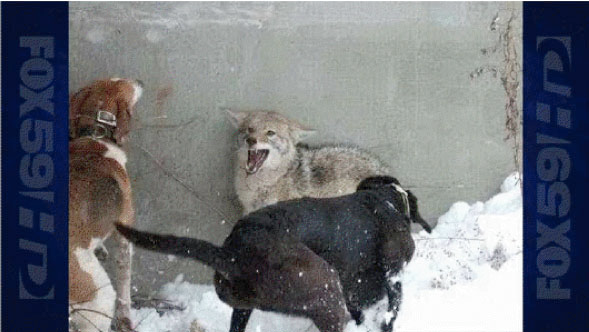 Penning has existed for decades but, ironically, may have benefited by the fact that few have ever heard of it.

Until now. This sadistic practice is beginning to enter public consciousness in a number of states following a 2007 interstate sting operation prompted by state conservation officers in Alabama that revealed an entire network of wild animal traffickers. This two-year undercover investigation of penning operations in four south eastern states led to the arrest of 18 people and the issuance of 46 citations for various violations related to the illicit black-market trade in live foxes and coyotes.

Florida was one of the states targeted in this sting operation and last year I blogged about how Florida was considering whether to regulate or ban this practice. Thankfully, after an intense campaign led by a coalition of organizations including Project Coyote, HSUS, the Animal Welfare Institute, and several grassroots organizations, the Florida Fish and Wildlife Commission voted unanimously to ban penning.

In a public statement on the issue, Chairman Rodney Barreto of the Florida Fish and Wildlife Commission stated:

"I don't believe this is fair chase...I feel Florida needs to be a leader in America. We need to end the use of these enclosures and end them now."

Shockingly, despite legislation and newspaper editorials calling for a ban on coyote and fox penning, Indiana is currently considering proposed rules to legalize the practice- even after its own Department of Natural Resources (DNR) recommended the practice be banned:

The letter, endorsed by internationally prominent scientists and ethicists states:

"We believe that the INRC needs to take a firm stand in banning this practice altogether. If the proposed rule (to regulate pens) is approved, the INRC will be legalizing a practice that runs counter to fundamental concepts of wildlife management and violates the principle of fair chase."

Wildlife agencies in several other states have serious concerns about penning, including the transmission of diseases such as rabies. In 2008, the Midwest Association of Fish and Wildlife Agencies passed a resolution urging the...

"adoption of state-by-state regulations prohibiting the importation or interstate movement of foxes and coyotes for the purpose of stocking coursing pens or for release and pursuit by hounds outside of coursing pens."

Americans recognize that dog fighting and cockfighting are unacceptably cruel and that such spectator events don't have a place in civilized society. When NFL quarterback, Michael Vick, admitted he was the owner-operator of a dog-fighting ring, most Americans were shocked and rightly outraged. How different is penning?

All of us have an opportunity to weigh in on whether Indiana should legalize this blatant animal cruelty or ban it altogether. The Indiana Natural Resource Commission is accepting public comments on this issue until May 18th and two public hearings have been scheduled on May 10th and May 11th. For more information about these public hearings and how to comment online, visit ProjectCoyote.org

It's time again for society to stand up, and shout a collective NO to this cruel, unethical and dangerous blood sport -and make penning illegal in all 50 states. Our shock and outrage can help relegate coyote and fox pens to their rightful place in America's dark past.

Comment directly on the INRC's website in support of a ban on coyote/fox penning (Note: Comments accepted until May 18, 2011).

Read comments to the INRC submitted by Project Coyote, the Animal Welfare Institute, the Animal Legal Defense Fund and more than 60 prominent scientists, biologists, attorneys, and veterinarians calling for a ban on coyote and fox penning in Indiana.

Read about a lawsuit filed by the Animal Legal Defense Fund, Project Coyote and the Animal Welfare Institute against the Indiana Department of Natural Resources (DNR) and its director Robert Carter Jr. over the Department's decision to waive state permit requirements for a controversial Greene County coyote and fox "penning" facility.