Considered lost for 50 years, Pablo Picasso's "Seated Woman with Red Hat," has finally been discovered at The Evansville Museum of History & Science... in storage. 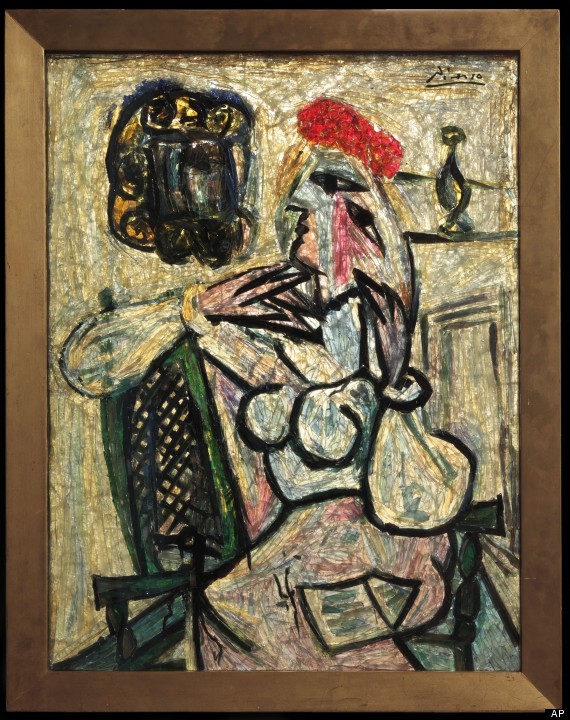 Museum officials discovered the piece rummaging through the basement and quickly took interest in the work. The piece was donated to the museum in 1963 by industrial designer Raymond Loewy. It was believed to be inspired by a Picasso painting but not done by the legend himself, thus credited to an artist named Germmaux. As it turns out, Germmaux is not an artist's name but is the plural of "gemmail," the medium used to assemble pieces of glass that later light up with color. Glass was a rare medium for Picasso, who incorporated it into his works during the mid-fifties with much success. "It sparkles like a jewel," John Streetman, executive director of the Evansville Museum, told The Guardian.

Although we'd imagine it would be a dream come true for an art museum to stumble upon a rare Picasso, the reality is much more complicated. After a discussion on Tuesday the museum's members have deemed the work too expensive to keep. "Now that we have a full understanding of the requirements and additional expenses to display, secure, preserve and insure the piece, it is clear those additional costs would place a prohibitive financial burden on the museum," said R. Steven Krohn, president of the Museum's board of trustees, told the Courier Press.

It remains unknown how much the "Seated Woman" will earn at auction, since the museum offered it up to Guernsey's for review. However, Picasso tends to dominate the rankings for most expensive paintings sold, with his "Garcon a la pipe" earning $126.4 million (adjusted for inflation) in 2004. In 2010, a piece the Cubist master created in a single day became the most expensive work of art sold at auction at the time, with "Nude, Green Leaves and Bust" going for $106.5 million."Seated Woman" is quickly becoming the Cinderella story of Picassos, from humble beginnings to earning its place in hallowed halls.

Check out a slideshow of other famous finds below: