Ring the bells that still can ring,
Forget your perfect offering.
There is a crack, a crack in everything,
That's how the light gets in. 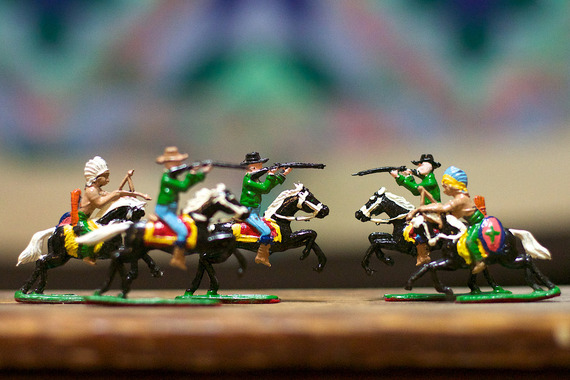 Why don't we pick a random day, say the third Thursday of a month. Any month, say the month of November, a quieter time of year. We don't we hit pause on our newsfeeds and playlists, our pagers and mobile phones, mute the soundtracks of our conflicted opinions, religions, politics, and have a feast.

While you baste and roast the turkey, I will light candles, turn the music on, then run upstairs to join the children playing Indians and cowboys. Teepees and forts. We will fight make believe wars all afternoon, with bow and arrow, musket and bayonet, and when the sun sets put down our weapons and fight over stuffing and pudding instead.

You could tell the story of another dinner the Plymouth colonists and Wampanoag Indians had, long ago. The Pilgrims were celebrating their first successful harvest; the Indians had taught them to grow corn. Those two peoples would ultimately quarrel over land and other differences too large and painful to ignore, but by the light of a campfire, one historic night, they had a feast and gave thanks.

Then perhaps you could tell a more recent story of Indians and cowboys. Of the Standing Rock Sioux and Energy Transfer Partners in a stand off over a stretch of land; that spot where Montana meets North Dakota, that is rich in oil reserves.

The world has been an unstable place lately. It has been a trying year. Dwindling resources and light trigger fear; there might not be enough to go around. More oil means more jobs, more money, resistance to volatility, so the company is building a $3.8 billion pipeline to move it to Illinois.

But wealth comes at a price and for months, the Indians have been protesting: no pipeline near their land. It will destroy their historic, cultural, religious sites, and if it cracks pollute their water and soil.

There is a crack, a crack in everything,

And there are humans on either side. Through it protestors throw Molotov cocktails and officers, ice water and tear gas. Who am I to say who is right or wrong? I just play make believe with kids. I know that angry people are just people trying hard to survive.

Markets and commodities will still be volatile tomorrow. Our differences will still be here. Our opinions, religions, politics conflicted. The fear of uncertainty. But it is quite dark and cold outside tonight; the cowboys and Indians must be hungry. So what if we hit pause, dug up more chairs and some more wine, and invited them in for a feast?

We could also invite the seven hundred and ninety-five million people starving around the world. We may have to sit on the floor and share silverware, but there will be more than enough food to go around.

We could turn this random third Thursday of the month into a historic night. Share recipes and stories and make a few memories to tell the children about next year.

We could celebrate being alive, and that the sky above our heads is clear. That we have electricity and running water and heat. That we are allowed to disagree.

There is a crack, a crack in everything,

But we can patch it tomorrow. In the meantime, you could end your story with the cowboys and Indians baking pies.

For more by this author, go to Aristotle at Afternoon Tea.