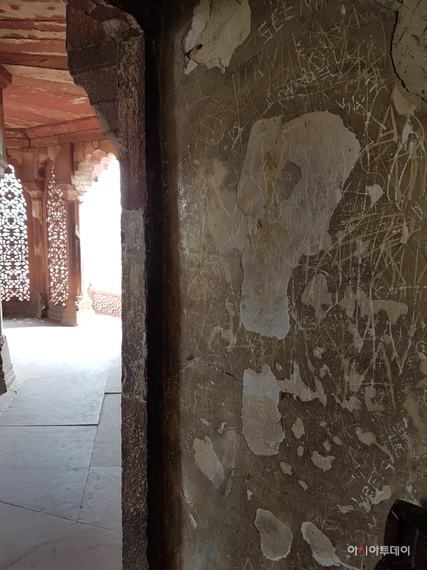 [An inside view of the heritage Agra Fort in the city of Agra in Uttar Pradesh. The walls are covered with graffiti, blocking visitors from seeing the actual feature of the historic site./ Photographed by Jeong In-seo]

By Jeong In-seo, New Delhi correspondent, AsiaToday -India's historic sites that are nearly 500 years old are being defaced with graffiti.

When I visited Agra Fort last Friday, it was crowded with tourists. Agra Fort is one of the most famous historic sites in the city of Agra, along with the world famous Taj Mahal. It is a red sandstone fortress built by the third Mughal emperor Akbar between 1565 and 1573. Made up of 20-meter walls and white marble, the palace is simply spectacular and captivates many visitors.

Unlike its external looks, however, its internal condition was disastrous. The inside of the palace was ruined by graffiti, supposedly done by visitors. Most of the interior decorations that had to be filled with floral patterns had fallen because of graffiti. Pillars supporting the building were also defaced by graffiti. I just couldn't find an area that remained unharmed. Most graffiti showed visitors' names and dates of their visits. 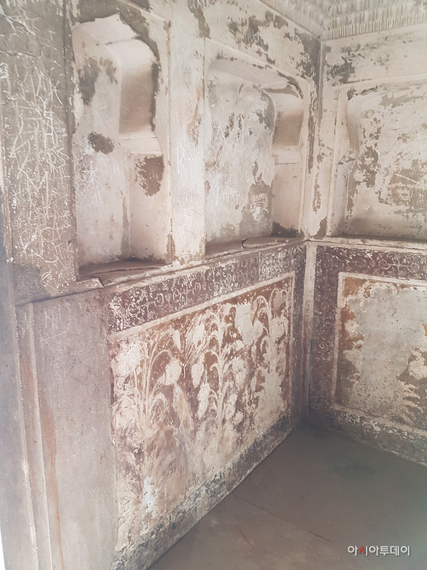 [The wall of the palace had been filled with floral patterns. But nowadays, their place are taken by graffiti./ Photographed by Jeong In-seo]

The graffiti were frowned upon by tourists. Mr. Jung, a Korean tourist, said, "It's a shame that a five hundred year old historic site is defaced by graffiti." He pointed out, "Is their memory more important than the value of the remains? Photographs are enough for memories. People have to stop graffiti."

Krishna, 22, who came from Mathura, said, "The reason many people write graffiti is because of lack of education. If they learn the value of the remains, graffiti will naturally decrease." 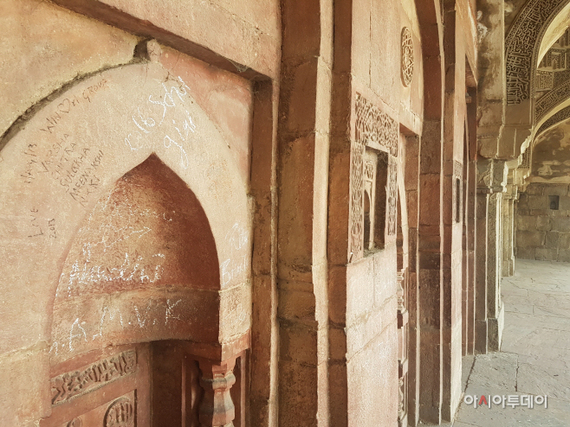 [Lodhi Garden, which is situated in New Delhi, is also suffering from graffiti damage./ Photographed by Jeong In-seo]

Graffiti damage is not just about Agra Fort. Lodhi Garden in New Delhi is also suffering from graffiti.

When I visited Lodhi Garden last Saturday, it was filled with people who came together to enjoy a picnic. Lodhi garden is one of the historic gardens in Delhi. It was set up in 1518 by the Lodhi dynasty, and is now a park adored by people of Delhi.

However, this place was also covered in graffiti. 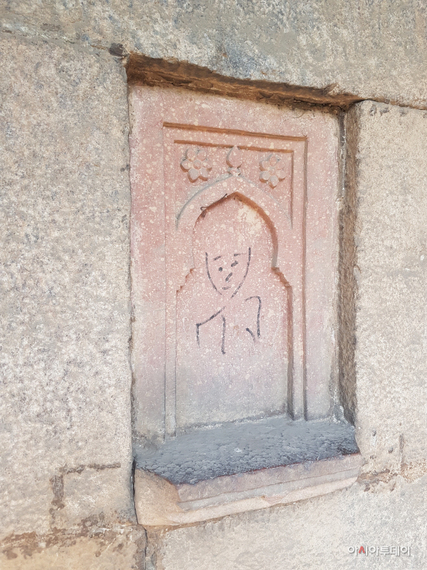 [Graffiti can be found in every corner of the remains. The picture shows the wall of Tomb of Sikandar Lodi, the oldest remains in Lodhi Garden./ Photographed by Jeong In-seo]

I looked around four historic sites in Lodhi Garden. All four sites were not much different from Agra Fort. The Islamic architectures were full of engraved names, drawing and dates. It seemed impossible for the 500-year-old historical site to recover from the graffiti damage.

Smriti, 51, who came out to enjoy a picnic with his family, frowned upon seeing graffiti. She said, "People who come to picnic with their families don't' do graffiti. It's done by thoughtless teenagers. It's really a shame. The beautiful figure is gone and all that remains now is ugly graffiti."

It seems hard for historical sites in India to regain their original status as the Indian government and heritage offices are not taking any other measures than recommending tourists not to deface historical sites. 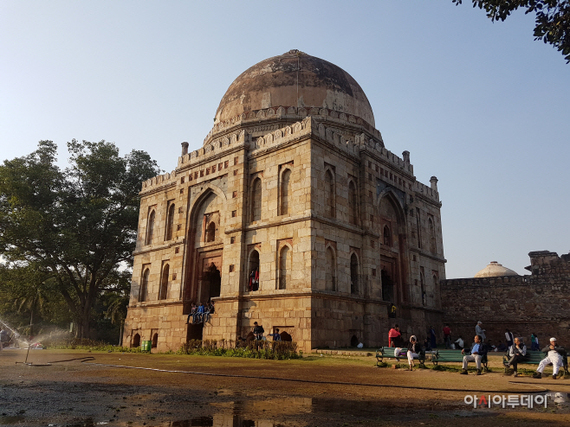