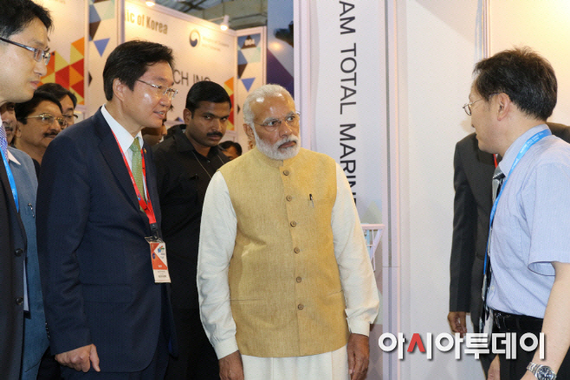 By Ha Man-joo, India correspondent, AsiaToday - Korean King Suro's queen Heo Hwang-ok, also known as Princess Sri Ratna from Ayodhya of India, is frequently mentioned at Korea-related meetings in India. The legend of queen Heo Hwang-ok has become the universal knowledge among Indian government officials since PM Narendra Modi mentioned it ahead of his visit to Korea back in May.

The central government and even local government officials mention the Heritage of the Three States, which tells the story of queen Heo Hwang-ok, in order to highlight the history of the Korea-India relations. As seen, Korea-India relations in public level are close enough that we could say they are in "special strategic partnership". The installation of Korean Plus Desk by the Indian Ministry of Commerce and Industry on June 18 for Korean firms looking for entering Indian market, symbolically shows it well. In this situation, arguments that both countries should benchmark each other are gaining strength. 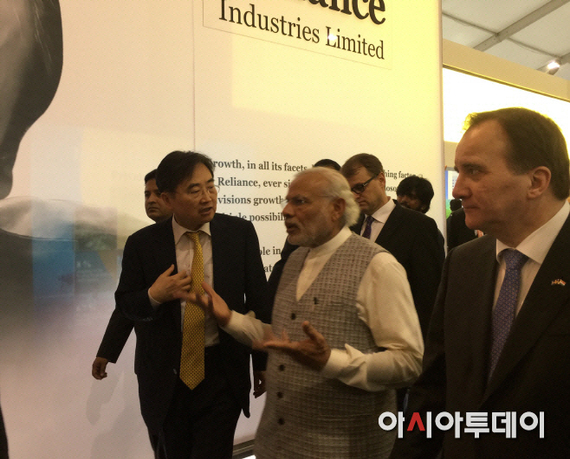 The pro-Korean diplomats in India and Korean scholars speak with one voice that Korea's modernization model is significant in India. They point out that India should learn from Korea's economic growth model, which starts from light industry to heavy chemical, high-tech, information and communication technology (ICT), and to green industry. 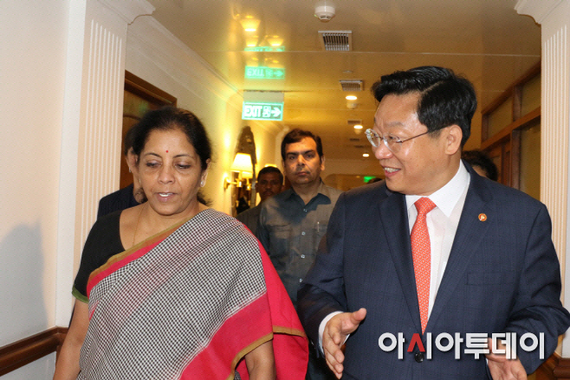 [The Trade, Industry and Energy Minister Joo Hyung-hwan (right) and the Indian Commercial and Industry Minister Nirmala Sitharaman (left) head to the office after the opening ceremony of 'Korea Plus' held at Ashok Hotel in New Delhi, India, on June 18./ Photographed by Ha Man-joo]

This is also related to the reality of Korean companies like Samsung Electronics, LG Electronics, and Hyundai that stand out among foreign companies in the Indian market in terms of their awareness and credibility. The India government, which is keenly aware of importance of 'Skill India' which could be the basis of 'Make In India', emphasize the fact that Korea's level of formal vocational training is 96%, which is higher than manufacturing powers Japan (80%), Germany (75%), UK (68%), and US (52%), while only 2.3% of India's labor force has undergone formal vocational training. 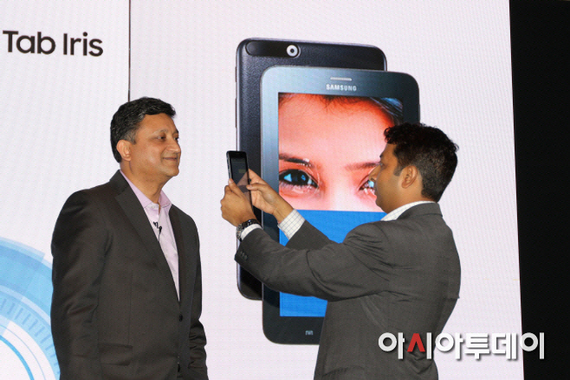 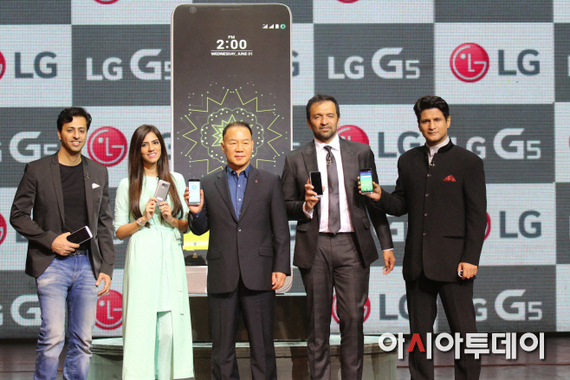 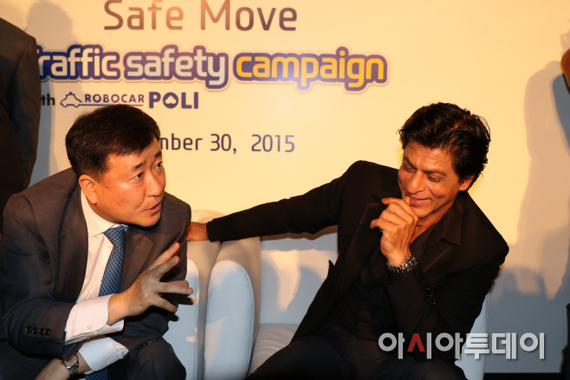 Diplomats and scholars pay special attention to Korea's Saemaul Movement, or New Village Movement. The situation of India where 55% of its industrial population is engaged in agriculture is not much different with Korea in the 70s, when it began its New Village Movement. Indian experts take note that the movement was not only regional social movement in rural areas but also urban areas and that the driving force came from Korean residents' spontaneity. According to the experts, the key success factor was that the government played a small part of creating the atmosphere, and the actual improvement of local communities was led by residents themselves. 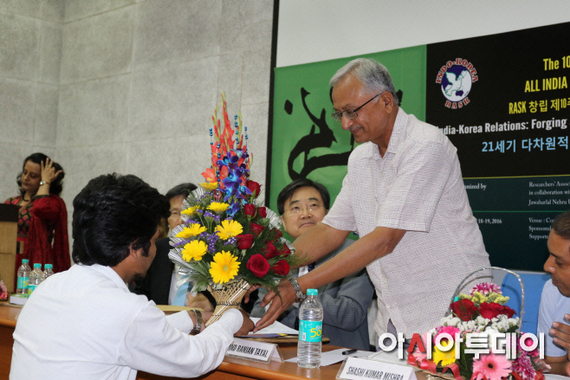 [Skand Ranjan Tayal (right), former Indian Ambassador, says India should refer to Korea's achievements and experience in order to carry out its social, economic initiatives with success. The picture is taken when he attended a two-day international seminar on "Indo-Korea Relations: Forging a Multidimensional Impact on Asia in 21st Century" held at Jawaharlal Nehru University (JNU) Convention Center on April 18./ Photographed by Ha Man-joo] 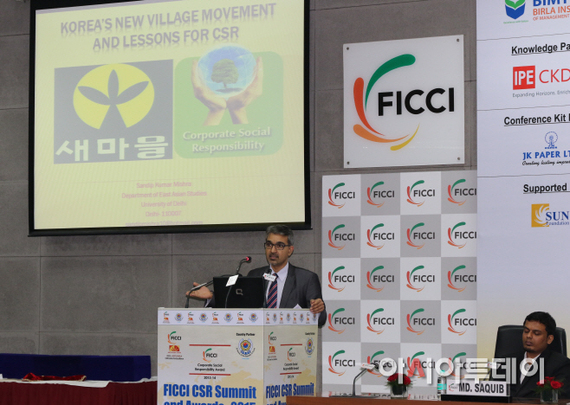 ["The CSR activities should combine the philosophy of Saemaul Movement," said Sandip Kumar Mishra, a professor at the University of Delhi, at the FICCI CSR Summit and Awards - 2015 held at FICCI, New Delhi, on November 24, 2015./ Photographed by Ha Man-joo]

PM Modi's enforcement of 'Clean India' policy by wielding a broom in a New Delhi slums reminds us of self-help spirit of New Village Movement. Although India's caste system was officially abolished after it became independent from Britain rule in 1947, India has not been completely free from its shadow. Traditionally, cleaning is regarded as something best left to the lowest castes. Therefore, it's very shocking for Indians to see a national leader cleaning the streets by himself.

However, some believe that Korea's modernization model won't be easy to succeed in India due to different conditions. While Korea has developed a single-race nation with single linguistic and cultural consciousness, India has various races, languages, regions and cultures within the country, and its local governments and local communities play a significant role. India can benchmark only some parts of the Korean model when promoting 'Make in India' and 'Digital India' initiatives, but it's difficult to apply the full package of Korea's modernization model. 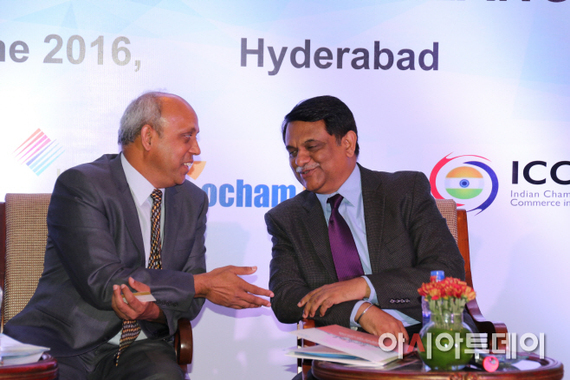 As an extension of this perspective, Jeetendra Uttam, Professor at Nehru University, claims that Korea's modernization model is suitable for the Indian state government level. According to prof. Jeetendra, India's state government with population of up to 200 million has high homogeneity in terms of language and culture, and the Korean model is likely to succeed as long as the state government has powerful and rational leadership. 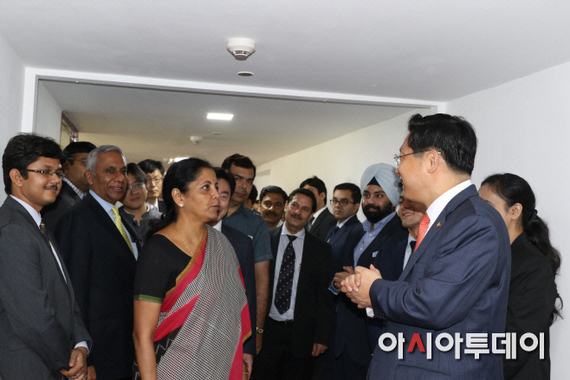 [The Trade, Industry and Energy Minister Joo Hyung-hwan (right) and the Indian Commercial and Industry Minister Nirmala Sitharaman (left) have a conversation in the office after the opening ceremony of 'Korea Plus' held at Ashok Hotel in New Delhi, India, on June 18./ Photographed by Ha Man-joo]

In the midst of such atmosphere, some claim that Korea should learn from India as well. India's software, start-up and IT industries are the benchmark for Korea. The Trade, Industry and Energy Minister Joo Hyung-hwan pointed out, "India has presented a model where latest IT industries such as software and ICT can be export industrialized while being a developing country. Korea should learn from India's service export strategy." 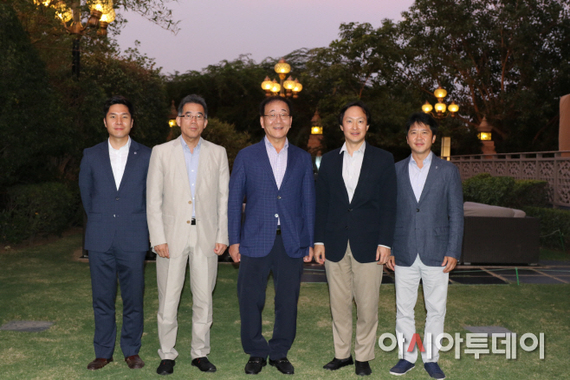