The biggest untold story in the world is now out in the open. Despite warnings from the World Bank about the dangers of unchecked climate change the coal industry has a global pipeline of nearly 1,200 plants planned, 2/3 of which are in India and China. India alone has plans to build a coal fleet nearly twice the size of the entire U.S. coal fleet. But if this pipeline has you thinking that a coal-fired future is inevitable, think again. These grandiose plans are an illusion the coal industry seeks to maintain because the truth is the majority of this global pipeline is nothing but vapor.

To understand the reality of the industry's plans, take a look at India and the basic math on which their plans rely. India's huge pipeline will require approximately 2.4 billion tons of coal by 2030. That's two and a half times what the U.S. currently consumes. More importantly, it's nearly five times the amount of coal India produces. To feed this beast India is going to need a herculean effort to increase production.

Let's take an optimistic scenario where Coal India (CIL) -- the state-owned miner responsible for 90 percent of domestic supplies -- maintains a robust 7 percent annual growth rate. In this scenario India would increase production to approximately 1.5 billion tons. Despite this mammoth increase in production the country would still face a supply shortfall equal to 920 million tons by 2030 -- a shortfall the size of annual U.S. coal demand and 38 percent of the total supply required for the Indian pipeline. That's a jaw-dropping amount of coal and it's the 'optimistic scenario' because it's based on the fantastical belief that CIL will maintain an annual growth rate it has only achieved twice in the past 10 years. 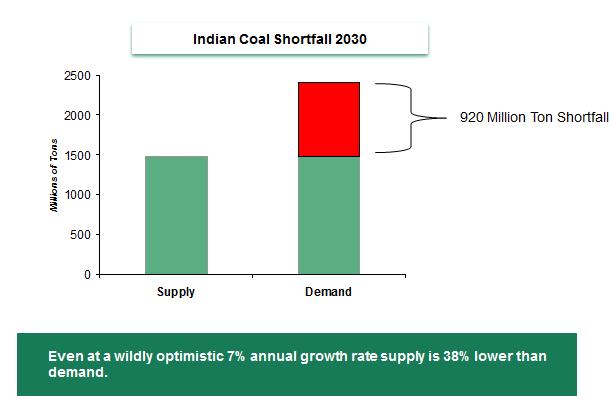 But this optimistic scenario looks even more doubtful when you take into account the woeful state of the Indian coal sector. Despite industry spin that 'environmental hurdles' are constraining production, the truth is India has simply not invested in the infrastructure necessary to mine and transport coal to power plants. Worse, the permitted mining expansions it does have are under heavy scrutiny as the coal gate scandal has already resulted in the revocation of dozens of coal leases.

To expand any further the industry will need forest clearances because remaining deposits sit under prime forest land. Getting those permits is already leading to a showdown with activists determined to preserve what's left of India's natural heritage. Which is why Prime Minister Singh's attempts to force CIL to sign fuel supply agreements are so laughable. Without solving fundamental infrastructure problems, or convincing Indian citizens to destroy what's left of the country's forests, those agreements aren't worth the paper they're printed on.

More importantly, though, even if CIL defies all past experience (and concerted opposition), the 920 million tons they will still need is roughly the size of the entire international coal market today. Unless India thinks it can lock down a monopoly on the global market, good luck fueling that pipeline. Even Australia's grand plans to more than double its coal exports wouldn't put a dent in this import bill. Speaking of bills...

The more pressing issue is at what cost India is able to secure that supply. Coal prices in the international market have hit a two-year low which has caused near hysteria in Australia where billionaires are decrying their inability to lower costs to compete. But the reality is that even these 'cheap' prices are still $90/ton -- triple what India pays domestically. But this is likely a temporary lull. Coal prices have been on a steady upward march for the past decade and there are no signs this trend will change course, given cheap, easily accessible reserves are tapped, transportation costs (oil) are rising, and a 'Organization of Coal Exporting Countries' (OCEC) is emerging. Geologically speaking, coal may be abundant but economically speaking cheap coal is dead. 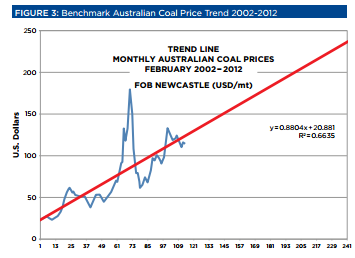 This all comes before local communities who face imminent harm from this expansion make town halls across the country ring with cries of 'No Coal'. Their movement is quickly joining the ranks of the anti-nuclear movement in terms of its global reach and efficacy at shutting down projects from India to Kosovo, the U.S. to Turkey.

So you see, this enormous pipeline is nothing but an illusion. But don't take it from me. Best to take advice from the Reserve Bank of India who has called for a freeze on lending to this 'distressed sector'. But hey, if you believe the industry go ahead and put your money on the table. Just be aware, it won't have much company.