The prosperity of India can be compared to a bus journey. If the driver ensures the air pressure is even in all its tires, the journey would become safe for its passengers. Similarly, if all the communities in a nation are on a level playing field, the prosperity of the nation becomes secure and sustainable.

Unfortunately, the majoritarian attitudes of a few harm India's harmony and adversely affect her prosperity. They harass, threaten and use violence to teach the minorities, women and the weak how to behave, and put them in their place. It is like letting the air out of one of the tires, hurting all of us in the end.

The 1984 Sikh Genocide, the demolition of Babri Masjid in 1992, burning of Hindu Passengers in Godhra and Massacre of Muslims in Gujarat in 2002, the rapes of Nuns, Dalits and destruction of Churches are among the ugly cruelties we have witnessed since independence in 1947. It is a shameful blot on the civility of our Mother; India. 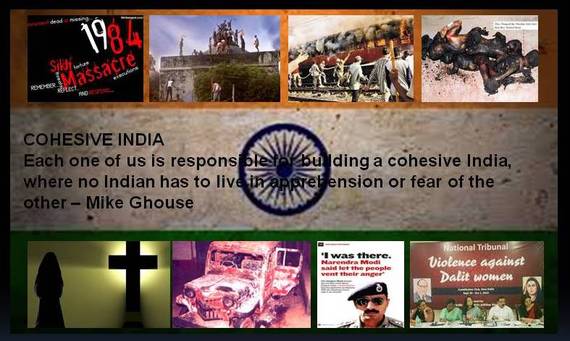 The anguish, suffering, apprehension and non-restoration of justice to the victims will continue to hurt the cohesiveness of India. As Indians, we need to set aside our pettiness and pull every Indian onto a level playing field, the more people we pull up, the greater the prosperity for all.

Deep down, all humans seek justice and a balance in life, and without it, they are lost in sectarian warfare. As a member of the civilized nations, we need to collectively work towards building a cohesive India, where no Indian has to live in apprehension, discomfort or fear of the other -- an India where everyone is free to eat, drink, wear and believe whatever suits him/her.

The Indian Muslims are sick of the blame and the ugly comments hurled at them about India's partition, attacks of Ghazni on Somnath or the cruelties and Massacres of Aurangzeb. Many a parents teach their children to hate, and build biases against Muslims. It is not good for any one.

In 1947, a few men in the heat of communal frenzy decided the fate of nearly 350 Million Indians, including 80 Million Muslims that resulted in partition of the nation. The Muslim masses were not even consulted about the division and those few decided what was good for them.

Today, Indian minorities face yet another dilemma: Narendra Modi. If the BJP wins the Parliamentary elections in 2014, Mr. Modi will become the next Prime Minister of India. 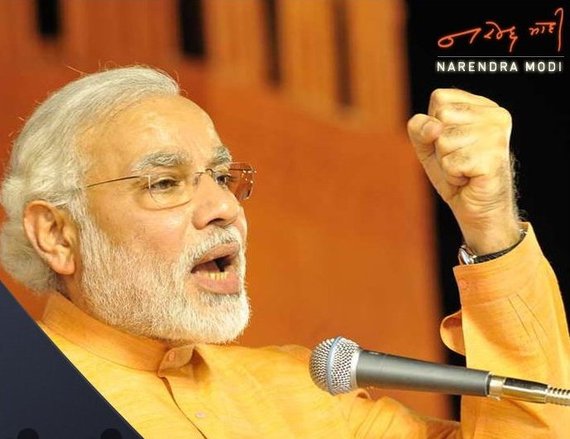 That prospect frightens Muslims, Christians and other minorities of India, the Gujarat Massacre wound is fresh, per the Union Home Ministry 790 Muslims and 254 Hindus were brutally murdered, but other figures place the death over 2000 Muslims in the mayhem, and thousands lost their homes, livelihood and witnessed brutal murders, rapes and slaughter of the family members. It is estimated that at least 250 girls and women had been gang raped and then burned to death.

The mayhem was similar to Rwanda and Bosnia genocides, and it all happened on Mr. Modi's watch as the Chief Minister of the state of Gujarat, and he is still the head while 20,000 men, women and children are rotting in relief camps seeking justice.

Those Indians who seek justice want Modi to be punished to commensurate with the crimes or as an accessory to the crime, and that no one should be above the law. However, there are other voices from the Hindu and Muslim communities, who are driven by justice for the victims. Unfortunately, these folks are shamelessly negated as "sold-outs" and this bullying cannot go on in a free nation.

It is time for Muslims to guard themselves from those few who want to make decisions for Muslims at large without their consent. "Ek Dhoka kha chuke Hain, aur kha saktay nahin (We have been deceived once in partition, and we cannot be deceived again)." Hence the need for this initiative, so people can debate, discuss and be informed. Nothing should be decided without a serious discussion.

Nailing Modi will not change the lives of people. The rich will live on, but the 20,000 refugees will continue to live in squalor.

Shouldn't we be concerned about those who were uprooted, lost their loved ones, lost their livelihood, homes and everything they had earned, and now living in relief camps with humility? They are primary to this issue and their wellbeing must be of paramount importance in all discussions.

We should seek restoration of lives of those denied, it does not mean to let Mr. Modi go free; he has to respond to the court hearings. If he is not guilty, let's leave him alone, but if he is, he needs to pay for that.

We are all in this together, and see things differently. We need to allow diversity of thought for a comprehensive understanding of the issue from a justice point of view, as well as long term cohesion in the society.

What good is the prosperity if people continue to live in fear? Both the ones who frighten and the frightened ones will lose out in the long haul.

Muslims and Christians experienced the blatant injustice by the state under the guardianship of Chief Minister Narendra Modi. We, the people of India in general, and Gujarat in particular have a choice to do nothing, or start the process of finding sustainable solutions.

Hindus, Muslims, Dalits, Sikhs, Christians, Jains, Buddhists and others have an equal interest in building a cohesive India where no Indian has to live in apprehension or fear of the fellow Indian, and together achieve the prosperity for all. Prosperity without peace is bound to be lost, why exercise then?

We have a moral obligation to the people who lost their lives, livelihood, and homes and who continue to suffer. We need to bring a closure.

What Does It Take? A PROPOSAL.

1. Restore the lives of refugees uprooted in the riots, find them minimum housing and a path to earn a livelihood. Let them be accommodated amidst all others with full security through caring attitudes, in the long run we have to build de-segregated societies for the good of all.

2. Inclusive governance, to include Muslims on the internal advisory of the Chief Minister to make security decisions on a voluntary basis with nothing to gain. These Muslims need to have an impeccable character and not the yes men or women, and must care for every Guajarati. Ideally, every Gujarati must care for the other without hesitation.

3. Justice to the families of the ones who have lost their lives, both Hindu and Muslim without discrimination.

4. Find the truth about burning of 59 passengers in the train in the most transparent way - to bring closure to doubts on both sides or acknowledge the findings and live with it.

5. Punishment for Anti-Muslim rhetoric in the state machinery, just like the strong anti-corruption rules the Chief Minister has instituted.

6. Meet with local Muslim, Dalit, Sikh, and Christian leadership on a regular basis, not to appease them, but to hear them out and prevent injustice to them. Remember, Muslims and other minorities are not looking for favors or handouts, but just fair treatment, and an opportunity to be productive citizens.

7. An initiation of annual Unity Divas, to bring people of different faiths, tribes, ethnicities and languages together to recommit to one Gujarat with liberty and justice for all.

If Mr. Modi can demonstrate that he is a good human being, and put in to practice the above seven points for the next five years, he would earn the goodwill of the people to aspire to lead the nation and get elected out of freewill.

Right now, the thought of Modi as Prime Minister is tearing India apart and his rallies may generate untold miseries of death and destruction. A few Hindu extremists may rejoice killing Muslims and a handful of Muslim extremists may revel in bombing rallies, resulting in a mess for all.

If Modi wants to bring prosperity without bloodying mother India, he must first earn goodwill of the people, and the wounds need to be healed for sustainability.

This will give him time to do his praischit (repentance) and follow the dharma (the right path), and understand the concept of Vasudhaiva Kutumbukum, where every Indian becomes his family, and hurting one Gujarati would amount to hurting all Gujaratis.

Mike Ghouse is a speaker, thinker and a writer on pluralism, politics, peace, Islam, Israel, India, interfaith, and cohesion at work place. He is committed to building cohesive societies and offers pluralistic solutions on issues of the day at www.TheGhousediary.com.