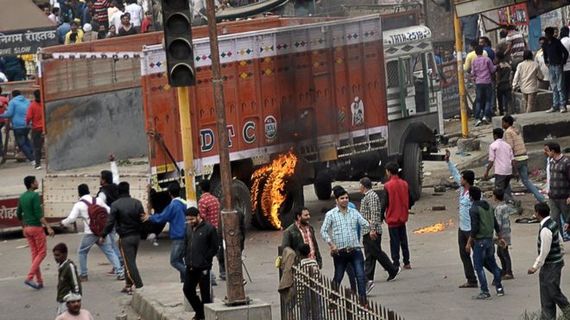 This article has been co-authored with Dr Unni Karunakara.

An incendiary and violent jobs reservation protest by young people from a community known as Jats in Haryana was close to bringing the capital of India, New Delhi to a standstill.

Is this an ominous sign of social upheaval that looms in the horizon?

Henrik Urdal of the Harvard Kennedy School finds that globally, it is nearly all young men who fight in wars or commit violent crimes and found that a "youth bulge" made them more strife-prone. When 15-24-year-olds made up more than 35% of the adult population--as is common in developing countries--the risk of conflict was 150% higher than with a rich-country age profile.

By 2020, the average age in India will be 29 and it is set to become the world's youngest country with 64% of its population in the working age group.

With Western Europe, the US, South Korea, Japan and even China aging, this demographic potential offers India and its growing economy an unprecedented edge that economists believe could add a significant 2% to the GDP growth rate.

However Western Europe, the US, South Korea, Japan and China have grown rich before they have grown old. They invested in education and skills, health, empowerment and employment and ensured women joined the workforce, as they were empowered to plan their families.

India is currently enjoying a 'demographic dividend', which means, it has a higher labour force than the population dependent on it. While this may appear a reason for blissful complacency, it must be remembered that by the latter half of the century India will have an increasingly aging population, yet the country lacks a social security net adequate for the needs of its people.

However a demographic disaster looms too. This is caused by low levels of investment in education and health. Currently the majority of Indian workers - nine out of ten - are in the informal sector, where employment is unsteady, pay is poor and social security is lacking.

Education, especially secondary education for girls, must be prioritized. The gross enrolment ratio for girls at the secondary school level is 73.7 (slightly higher than for boys) but the government cannot rest until that number is 100. The 10% cut in government allocation for the school sector means the push to towards total gross enrollment just got harder.

The country must also generate large scale employment, taking care to ensure more women join the work force. Concurrently, access to quality higher education must be expedited; currently, 75% of graduates, by some estimates are not considered employable.

The healthcare sector is really where India must up its game. Rates of malnutrition among India's children are almost five times higher than China's and twice those in Sub-Saharan Africa. A staggering 75% of new mothers are anaemic.

Healthcare in India so pathetic that without a seismic change the demographic dividend may not last as long as envisaged. The country has one of the lowest government expenditures on public health at a measly 1.2% of GDP. To compare, fellow BRICS countries China and Brazil spend 5.5% and 9% of the GDP on healthcare. In 2015, the Indian government went so far as to slash the budgets for both education and health sectors.

Consider some statistics: Around 700,000 unqualified doctors are practicing medicine in Indian hospitals. 50% of Indians (and 60% of those living in rural areas) travel at least 5 kilometres to access a healthcare centre and in rural India, 8% of primary healthcare centres do not have medical staff. Less than 15% of the population has healthcare insurance or cover. A single illness in a poor family can push a family below the poverty line.

Appropriate policies, strategies and programs need to be put into place immediately. Priority must be given to substantially lowering fertility (presently Total Fertility Rate/TFR is 2.5) and lowering maternal and child mortality. While overall, India is on track to achieving replacement level fertility of 2.1 children per woman, the TFR of 2.5 masks disparities between urban and rural areas with TFRs of 1.8 and 2.6 respectively and regional variation between states, notably between northern states like Uttar Pradesh (TFR 3.3) where illiteracy and poverty rates are high and more developed southern states like Kerala (TRF of 1.8) which also has the highest literacy rate in India.

As Haryana is showing, without concerted action, India could instead face a backlash from the growing numbers of disgruntled and unemployed or unemployable youth that will emerge as has already been witnessed in many other parts of India.

However, in a best case scenario, if India makes healthcare the government's central priority, it could grow at an unprecedented rate. The country would do well to start by following the example of African countries, many of which in 2001 pledged to allocate 15% of their GDP to public health. A matching investment in education and skills would be an appropriate starting point.

Whether India's youth will be a blessing or a curse, a demographic dividend or a disaster, firmly rests in the hands of the government and the pro-youth policies it implements.

Another version of this opinion piece appeared in the Hindustan Times.

Siddharth Chatterjee (@sidchat1) is UNFPA's Representative in Kenya. Dr Unni Karunakara (@unnikarunakara) is a former International President of Medecins Sans Frontieres(Doctors Without Borders) and presently a senior fellow at Yale University. These are personal views of the authors.