James Mellis is an assistant professor of English at William Paterson University. Until They Are Home (published as "Stephen James") is his first novel. He lives in New Jersey. 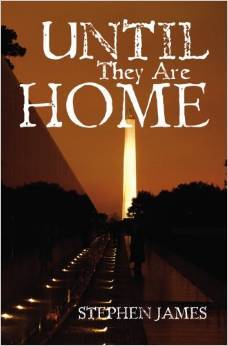 Until They Are Home is based on a true story. Can you talk about that story and why it inspired you to write the book? What was so compelling about the person in real life and how did you translate that to fiction?

Until They Are Home is inspired by a story I heard one day while listening to the radio. The report was about some hikers in Alaska who found the remains of a WW2 test pilot who had crashed during the war and was never found. Then, sixty years later, the plane and pilot were both recovered and buried, with full honors, at Arlington National Cemetery. I was at first struck by the sense of loss of the story, that this pilot, who had lost his life defending our country, was just gone, and how for his family, as I imagined it, there were all of these unanswered questions about his fate. The story then segued into talking about JPAC (now named DPAA, the Defense POW/MIA Accounting Agency), which is a government organization made up of both civilian and military personnel and who are dedicated to locating and retrieving the remains of missing servicemen from all over the world. I was struck by the tireless dedication and detective work that they do to bring people lost decades ago and thousands of miles away, home to their families and a grateful nation. We have anthropologists, munitions experts, translators, forensic scientists, etc. running all over Europe and Asia solving these mysteries for us and we hardly ever hear about them. I felt their stories deserved a wider audience, so I first conceived of a television show based on the DPAA and in doing so, wound up writing a novel!

What's so challenging about writing a work of fiction that based on a true story? Are there any rules you have to follow?

For me, the challenges were twofold. First, and most importantly, I wanted to write an entertaining story while remaining respectful to those who lost their lives in service to our country. Given the sacrifices that people made, and continue to make for the rest of us, I struggled to show them as flawed human beings, who are nevertheless heroic, without sensationalizing their deaths or falling into simplistic patriotic cliché. My second biggest challenge was trying to attain verisimilitude in the details. I don't have a military background, and this novel takes place over many decades, so a lot of research was needed to make sure I was describing materiel, geographies, weapons, accents, etc., accurately. As for rules, I was only constrained by a desire to do justice to the DPAA and the memories of the servicemen they recover.

Why did you choose to self-publish this book? Why not traditionally publish?

I chose to self-publish as a matter of expediency. As I explained, my initial idea was that a television show based on DPAA would be fascinating. So, when I initially wrote a treatment, my attorney/ advised me I should "flesh it out" to better protect the idea. A few weeks after doing that, I realized I had the beginnings of a novel on my hands and went from there. I was excited and anxious to get it out there, and self-publishing just seemed easier than submitting to a traditional publisher and waiting around for a response. I hate waiting!

I do believe in it, but also believe there are ways out of it. Of course, every writer is different and has his or her own strategies that work for them. I tend to write in spurts of intense productivity, followed by a lull. After many hours spent staring at a blinking cursor on a computer monitor, I've learned not to force the issue when I find writing difficult, because I know (or at least hope!) that the breakthrough will come again. I try not to panic over it. It's a cliché, but it's true, if I start by writing for 15 minutes a day, even when feeling resistance, the spark always returns.

Talk about craft. What does it have to do with writing a good book?

That is subjective. I'm a big fan of craft, a tightness in the prose, the perfect word, pitch or image that makes me wonder how an author can image such an unbelievable image or sound. Toni Morrison is a master at that. She'll incorporate a phrase every so often that just will knock me over. I like a certain amount of poetry in my prose. As for writing a good book, I have no idea. I try to write in way that I enjoy reading, without being too derivative of my literary heroes.

Next is a non-fiction work. I'm writing a literary history of voodoo, hoodoo and conjure in African-American literature, from slave narratives to the present. The study will examine how, in different time periods, African and Caribbean original spiritual beliefs helped to shape African-American identity.

What are the best tips about the writers' life that you've learned? Download mine here!