IndieCade --the International Festival of Independent Games-- hits downtown Culver City, California this weekend. Here's a look at one of the games that will be there.

This unpublished strategy board game from the 1930's has been recreated by designers Eric Zimmerman and John Sharp. Two to four players compete to conquer outer space, with dice used to represent ships. Straightforward enough. Until you add in the fact that the game was actually a ritual practice used by an obscure secret society that few people today remember.

(Writing sentences like that is why I love this job.)

Curiosity sufficiently piqued, I talked to Zimmerman and Sharp about the game, one of this year's IndieCade finalists.

TURNSTYLE: How did you find the original Armada? The Indiecade notes refer to it as an "obscure game-like ritual practice from the 1930s called 'Armada Dei Gratia VI'", was this some kind of Golden Dawn like occult hoodoo?

Eric Zimmerman & John Sharp: To be honest, we're not sure. It seems like it was something akin an occult society, but a bit more philosophical as well. The name means "Armada from the Grace of God" and it seems to have incorporated elements of Christian mysticism (like the Freemasons) but also some elements of occult spiritualism.

TS: What was the purpose of the ritual? 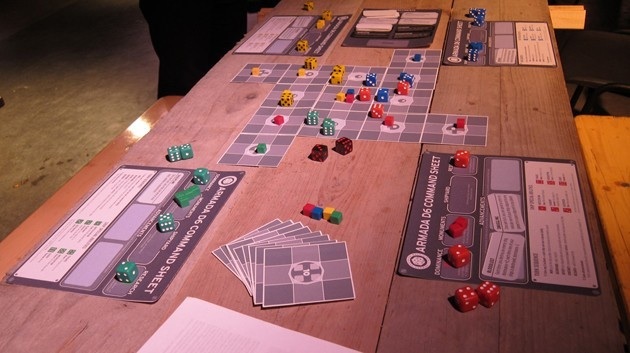 EZ & JS: Games have a long history of connection to divination and to moral systems. Early dice games were used to predict the future and ancient games like Snakes and Ladders (originally from southeast Asia) were models for ethical instruction. Snakes and Ladders embodies the Karmic idea of being rewarded for good deeds and punished for bad ones.

We speculate that the original Armada d6 was used in a similar way - a game that was played for pedagogical reasons. In the case of Armada d6, our guess is that the game embodied a moral world based on conflict and contestation. It seems as if the game focused on inner, spiritual conflict rather than more literal forms of conflict like war.

TS: What does getting into IndieCade mean for you personally? For the project?

EZ & JS: We've been going to IndieCade for many years, and the best thing about being part of the festival is reconnecting with the community of designers making independent games. The best benefit of getting into the festival is an opportunity for this community to play your game.

TS: What excites you the most about the indie game scene right now?

EZ & JS: That the indie game scene is no longer so separated from video games in general. Independent games are no longer strange, exotic, and isolated. They are just another part of the larger ecosystem of games in culture.

TS: What are you looking forward to seeing at IndieCade?

IndieCade, the International Festival of Independent Games starts October 4th with the Red Carpet Awards, and opens to the public on Oct. 6th in Culver City.