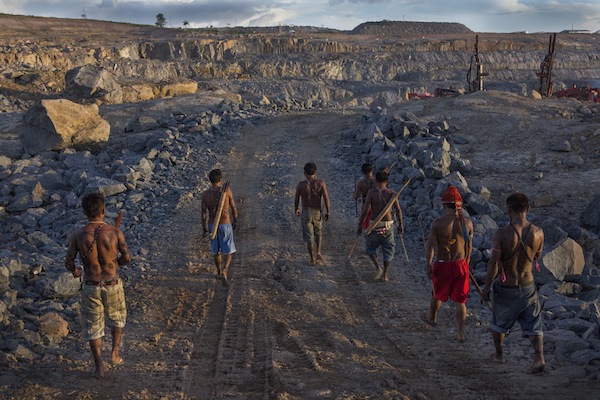 Armed with bows, arrows, and heavy wooden clubs, roughly a dozen indigenous men of the Munduruku tribe take shifts guarding the entrance to the construction site of the world's third-largest dam, the Belo Monte. Together with 170 indigenous protestors of various tribes, including women and children, the Munduruku have forced all construction to a halt. It is their second occupation of the dam this month, and this time, they say they will not leave until they have talked to the president of Brazil herself, Dilma Rousseff.

After 20 years of protest against the Belo Monte Dam, construction of the controversial hydroelectric project is reaching its peak this year, sparking indigenous fears over future plans to dam Amazonian rivers. Studies for three dams on the Tapajos River, a tributary of the Amazon, are currently being conducted in Munduruku territory without indigenous permission.

"We're trying to fight ahead of time, so we won't have to deal with what is already happening here," says Akay Biorebo, a Munduruku warrior. He gestures at the bare cliffs of dirt behind him, where the land is being prepared for the main turbines of the Belo Monte Dam, being built on the Big Bend of the Xingu River.

Indigenous groups of the Xingu region claim that licenses for Belo Monte were granted without proper consultation of indigenous peoples, whose lands surround the dam site. There are currently over 50 lawsuits held up in regional and federal courts challenging the legality of the dam while construction forges on. Now, other Amazon tribes such as the Munduruku fear that Belo Monte has set a precedent for development and construction without consultation.

Biorebo cited Article 231 of the Constitution, which guarantees indigenous peoples' right to their traditional lifestyles and the right to live permanently on their traditional lands. But the government is using force--deploying military police, for example--to support dam studies conducted on indigenous territories.

"These people are coming onto our land without our permission," Biorebo says. "But we're united here, with one voice, to show that this is happening. We hope that this will give us a chance to talk to Dilma."

On May 2, the Munduruku banded together with the Kayapo, Xipaia, Arara, and other indigenous groups in the area to occupy Belo Monte with the same demand: for the government to respect constitutional indigenous rights. The occupiers left the site peacefully when they were offered a meeting with Secretariat-General for the Presidency, Gilberto Carvalho. But the meeting never happened. Now occupiers say they won't leave until they begin a dialogue with Rousseff or one of her secretaries.

"We're here waiting for Dilma to come to talk to us. That's not too much to ask, is it?" says Kaba Remuybu, a leader of the Munduruku.

The tribes say they have come prepared to occupy the site for months, and that they will not be removed peacefully unless their demands are met.