In the span of history, in the rise and fall of great kingdoms, in the measurement of evolution, the last two millennia is but a blink in the culmination of years, yet much of what we know, how we teach, what we legislate and how we operate today as humans is primarily influenced by the setbacks and advances in the last two thousand years.

Certainly the last 21 centuries of knowledge, knowhow and life continue to influence much of what is done today. To Western practices and beliefs, the concept of indigenous knowledge -- the collection and utilization of traditional practices and knowledge acquired through oral history, stories, chants and dances -- may still be a difficult source to rely on as qualitative and quantitative research or application. In the Pacific, however, indigenous knowledge influences many sectors of life for much of Polynesia, Micronesia and Melanesia and is often a source or an agent of pride.

In Hawaiʻi, the northernmost point of Polynesia, indigenous knowledge has been the impetus of a renaissance of various forms over the last five decades for native Hawaiians. Reconnecting ourselves to our mother tongue, our chants and song, a conscientiousness of our socioeconomic and political standings have provided a cumulative movement of the strengthening of our indigeneity.

In the 1970s, a groundswell of issues like land ownership, language revitalization, sovereignty and cultural practices were large building blocks that have created today's solid foundation in the practice and strength of our native identity. One of the seminal moments during this period was the rebirth of Polynesian navigation techniques by the Polynesian Voyaging Society with the creation of a performance accurate deep-sea voyaging canoe. Nearly a year after its completion, the group embarked on a successful voyage on the traditional vessel named Hōkūleʻa in 1976. A round trip from Hawaiʻi to Tahiti, the crew utilized stars, currents, water salinity and indigenous knowledge as their navigational tools, which put to rest the notion that transpacific voyages without European maps, compasses or an overreaching ideology of discovery was the only way great civilizations traversed the globe. 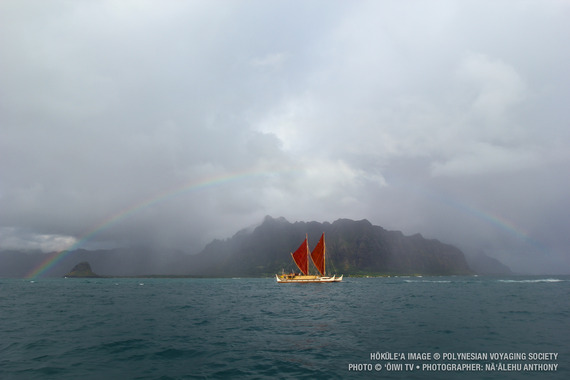 Instead, the stories of our grandparents' grandparents were enough to ignite a spark of curiosity. Polynesian Voyaging Society put to rest Thor Heyerdahl's hypothesis that the people of the Pacific happened upon these islands by meandering through Oceania's currents in the fervent hope that land would soon avail itself. The Norwegian ethnographer's raft, dubbed Kon-Tiki after the Mayan Sun God, paled in comparison to the waʻa kaulua or the double-hulled canoe -- the predecessor of the modern-day catamaran -- built by the Polynesian Voyaging Society and fueled by indigenous knowhow. Until the canoe's launch, it had been a little over a century since Hawaiʻi's waters carried a vessel of this sort. As a people, native Hawaiians were reconnecting, rebuilding and relearning.

Hōkūleʻa's initial voyage required a skilled navigator but the skills and knowledge to be a master navigator was all but lost in Hawaiʻi. The voyaging society reached out to our Micronesian cousins and in them we found a gem named Pius "Mau" Piailug (1932 - 2010), by age 18, he was considered a master navigator. Piailug's knowledge reconnected traditional voyaging paths throughout the Pacific. Indeed proving that the world's most vast body of water acted as the East Coast's I-95 or Europe's E 40 -- an ocean of paths.

Mau Piailug's legacy has taught native Hawaiians, that our indigenous knowledge, our stories, our culmination of traditional practices for the last two millennia endures its validity as the day it was first practiced.

Hōkūleʻa has spent the last year traveling to each island in Hawaiʻi, the first of a four-year voyage circumnavigating 47,000 miles, 85 ports and 26 countries around the globe, carrying the message: Mālama Honua -- To Care for the Earth. It will be accompanied by a sister canoe, Hikianalia, which will act as the Voyage's communications and education hub, providing a unique opportunity to track and interact with the canoes in their Global voyage to disseminate their simple, yet crucial message. On Friday, May 30, 2014, these two canoes and their crews left the familiar waters of Hawaiʻi and began a three-year journey around the world. Indigenous knowledge is going global.

I would like to believe that native Hawaiians and Hawaiʻi could solely lay claim to Hōkūleʻa. The truth is, she is born of Micronesian knowhow, put together by the blood, sweat and tears of the Hawaiian people and held together by the hope of people across an ocean. She is the result of indigenous knowledge.

For more information on Hōkūleʻa and tracking her global voyage, visit www.hokulea.com and www.oiwi.tv. 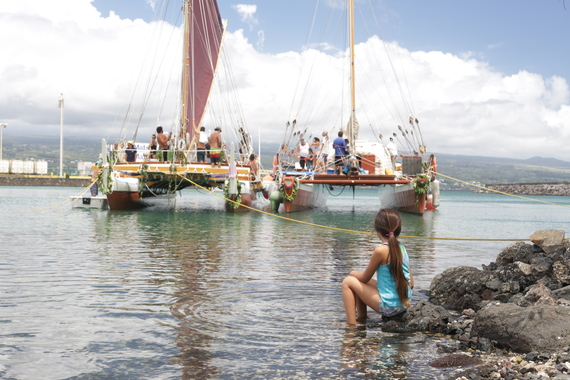