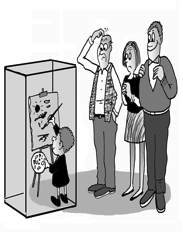 Years ago, I read an article in the daily newspaper about a woman who delayed choosing a set of dishes because she was waiting until she found the "right man" to marry. She feared that if she committed herself to dishware, she would limit her options for a potential husband who might be repulsed by her choice of tableware or independent spirit.

While her fear may sound extreme, it does point to an underlying truth: A personal choice represents a tiny sliver of who we are -- an identity that distinguishes us (in a minor or major way) from others.

In Jungian psychology individuation refers to the process in which the self develops out of an undifferentiated unconscious. In this psychic process innate elements of personality and the experiences of the person's life become integrated over time into a well-functioning whole.

The child psychoanalyst Margaret Mahler studied the human infant and developed the theory of separation-individuation, the stages at which the baby learns to distinguish his body as separate from his mother's (or caretaker's) and later, a sense of his own mind as evidenced by the use of the word "no." (Please refer to her book, The Psychological Birth of the Human Infant, 1975)

As we become increasingly specialized (in one or more ways), the pool of people similar to us shrinks, and we may have to extend ourselves into new territory to find other like-minded people.

Some people fear psychotherapy because the process can lead to a sense of individuality that changes us and our perception of the world and our relationships.

Ms. N.'s therapy exemplifies how individuation altered her life. When she began treatment she told her therapist that she didn't want to change anything about her "solid" marriage. Ironically, her analysis led to a divorce but also surprised her when a subsequent relationship proved more gratifying.

Motivated by his experience of isolation, Dr. Sebastian Zimmermann photographed psychotherapists in their offices. He compiled an elegant volume, Fifty Shrinks in which he included a description of how each psychotherapist works with their clients. Dr. Zimmermann used the feelings of isolation in the service of creativity. As a result, he established new connections (with colleagues, architects, editors) that diminished his sense of separateness.

Conclusion: Ideally, individuation is a life-long process. As we make choices, we develop our talents, gifts, and interests and find like-minded people with whom to share.