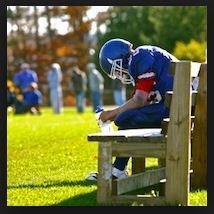 "Suck it up." "Play through the pain." "If you can't play, someone else will." "Quitting is not an option."

If you are the parent of a child who plays youth sports, these words probably reverberate through your soul. They are the most repeated phrases in youth and high school football. I know first-hand the effects of recurring degradation on a young athlete's psyche, not to mention the consequences of physical manifestations.

Today I met with my 14-year-old son's doctor for the fourth time in five months searching for answers. The story is the same.

My twin boys have been playing football since the age of seven. They tried several other sports and decided on the sport they love. Their words are always the same: "We just want to play football." I respect their determination. As a mom, it is my job to support their endeavors.

During the doctor visit, my son was diagnosed with anemia. At 5'10" and 103 pounds, words don't adequately describe the concern I have. Imagine for a moment what 103 pounds looks like on a 5'10" frame. It turns out, my son's psyche is battered and bruised by egregious coaching from playing youth football. And everything came to a head this past season on his freshman high school team.

Standing compliantly on the sideline, one of forty-two freshman players, the game was two hours into regulation and my son hadn't stepped on the field. Even worse, during the fifth quarter (a brilliantly thought-out, poorly executed plan to provide play time to those who received very little) there stood my son.

The last man standing in the direct line of vision of the head coach and his staff.

My son was the only player out of forty-two who didn't get an opportunity to play football for reasons we will never know. It was like he was invisible. He attended all practices. He was obedient and supportive of fellow teammates. Do you have any idea what this does to a fourteen-year-old boy who is struggling with stepping into manhood? It's psychological warfare. After this episode, his weight began to plummet and the mental distress manifested physically.

Conversations with other parents tell me it is not uncommon for their kids to be completely...forgotten.

And what do our children do to ensure this doesn't happen to them? They "play through the pain," and "suck it up." They subject themselves to injury. And when injured, they shrug it off so coach and teammates don't see them as weak, as human.

A broken soul now envelopes my son. I see it in his eyes. I feel it in his presence. He tries to put on a good front for my husband and me. You think all of this is not relevant to the super-charged topic of concussions, think again. There is a direct correlation between concussions and the process of youth sports indoctrination and the pressure to "suck it up" and "play through the pain."

Let me tell you why.

Think about the pro-athlete lying stunned and motionless on the football field. The only alternative in his mind is to mask the pain. This is a conditioned response cultivated in youth and high school sports. Athletes have a propensity to downgrade injuries to avoid being harassed by peers, labeled a quitter, and/or risk punishment through reduced play time. In the NFL, the stakes are higher with millions of dollars in compensation at risk.

Players are treated like celebrities. Their bigger-than-life personalities are seductive. The game itself addicting. Football captures our attention five months out of the year enticing young and old alike through well-orchestrated marketing strategies. It's no surprise professional football is a 9 billion dollar industry. Bigger, stronger, faster elite athletes are changing the landscape of professional sports. The field of play is no longer soil and grass and has lost ground (no pun intended) to its unforgiving distant cousin, artificial turf.

It's no wonder incidences of concussions, as well as other injuries, are on the rise. In my experience as a mom of twin athletes, I believe it all begins in youth sports. Fundamental skill development, like proper tackling, isn't afforded the highest priority. Often times, coaches' philosophies are incongruent with their actions.

I believe a cultural overhaul is needed in youth sports.

To be biased is to be human. However, when bias clouds your vision and prevents logic or stops people from doing the right thing, bad decisions are the result. Coaches in youth sports typically have their own child on the team. It is the nature of volunteering that a parent is requested to coach. There exists inherent bias in the duality of the parent/coach role. These biases are revealed when coaches utilize the same players to execute plays on both offense and defense without substitution. Keeping youth athletes in the game an extended period of time increases the incident of injury. And when an injured player comes off the field, coaches' commonly reintroduce the player prematurely.

Winning is so pervasive in youth sports that player safety is often ignored.

Many, many problems exist in youth sports. As parents raising the next generation of athletes, we need to advocate for change.

It needs to start now, and perhaps, the acknowledgment that problems exist is the first step.