A new fragrance from Lush Cosmetics, The Smell of Freedom, is a blend of sandalwood oil and diverse other aromas. Starting last year, Lush began an unusual campaign in marketing this perfume. At stores in Germany, England, and Australia, Lush raised the national flag of West Papua, a region where sandalwood grows wild. Earlier this month, on Dec. 1, people all around the world raised this same flag, the Morning Star. No, this is not just the latest vapid fashion trend. People are raising this banner of freedom because it has been outlawed by authorities. Papuan leaders first flew the Morning Star on Dec. 1, 1961. Two weeks later, on Dec. 17, 1961, the Indonesian military invaded -- initiating a conflict that has lasted for more than fifty years. For one week Lush donated 100 percent of their proceeds from The Smell of Freedom perfume to Papuan independence activists. 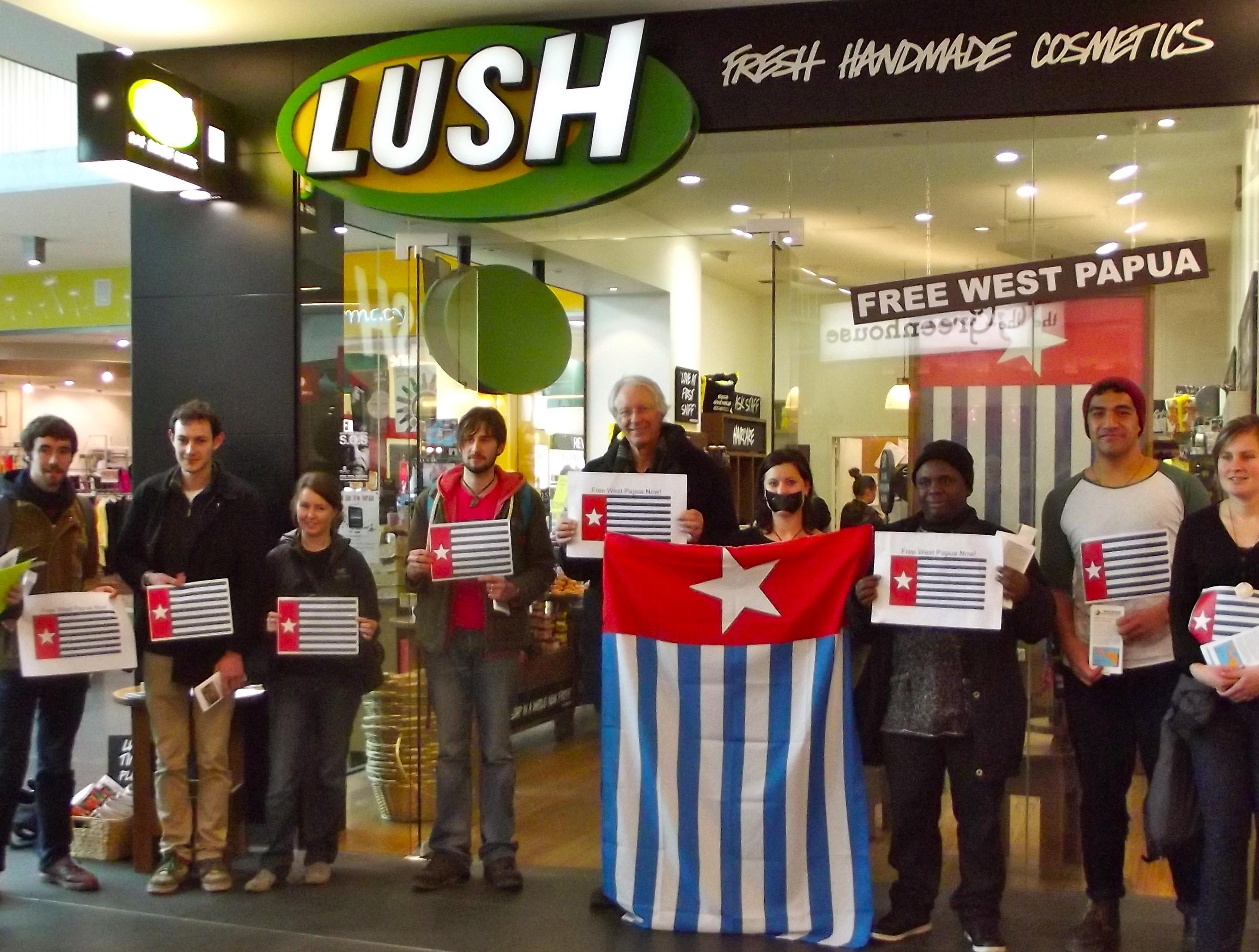 The stakes of this conflict are high. West Papua is home to the largest gold and copper mine in the world, run by Freeport-McMoRan, a company based in Phoenix, Ariz. In 2011, Freeport paid over $2 billion in taxes to the Indonesian government. Taxes are also streaming in from BP, the company known as "Beyond Petroleum" that is operating a colossal natural gas field off of West Papua's coast. Yet, West Papua consistently ranks last, out of Indonesia's 33 provinces, on the Human Development Index -- a measure of life expectancy, literacy, and standard of living. Stark economic inequalities, and appalling abuses by security forces, fuel West Papua's independence struggle. Peaceful flag-raising ceremonies, events which brought thousands onto the streets in recent years, have become opportunities for ordinary civilians to express their dissatisfaction with Indonesian rule.

While people raised the Morning Star flag in solidarity in Europe and down under in Australia, the streets of West Papua were strangely devoid of celebrations this year. In late November Brigadier General Waterpauw, Deputy Chief of Police for the Province announced that his troops would crack down on indigenous leaders in West Papua, if they tried to raise the flag. A massive show of force, involving some 6,000 police officers plus additional military personnel, kept most civilians off city streets on Dec. 1. Victor Yeimo, a youth activist who defied police orders, was detained as he led a peaceful march -- starting from the grave of an indigenous politician who was killed by the Indonesian military.

Flying flags has not always been considered treasonous in Indonesia. Gus Dur, Indonesia's first democratically elected president, was greeted by an estimated 20,000 people --waving the Morning Star and demanding independence -- when he visited West Papua on New Year's Eve 2000 to usher in the dawn of the new millennium. While firmly rejecting demands for a vote on the issue of independence, Gus Dur's administration later announced that flying the Morning Star flag would no longer be considered a treasonous act. Authorities began to permit the flying of this controversial banner as a "cultural symbol" alongside the red-and-white national flag of Indonesia.

Even as Indonesia's civilian leaders began to embrace international norms about the freedom of expression, their policies were quickly undercut by security forces. On Oct. 6, 2000, a local police commander at a remote highland outpost named Daniel Suripati launched an operation to lower all Morning Star flags in his jurisdiction. By the next day at least 37 were dead and 89 seriously injured. Papuan groups flying the Morning Star flag "were attacked deliberately and with considerable force," according to a Human Rights Watch Report. During these assaults "warning shots were fired to disperse Papuans gathered... the flagpole was chainsawed, and the flag torn up or confiscated. Papuans present were beaten, rounded up, and put in police vehicles." 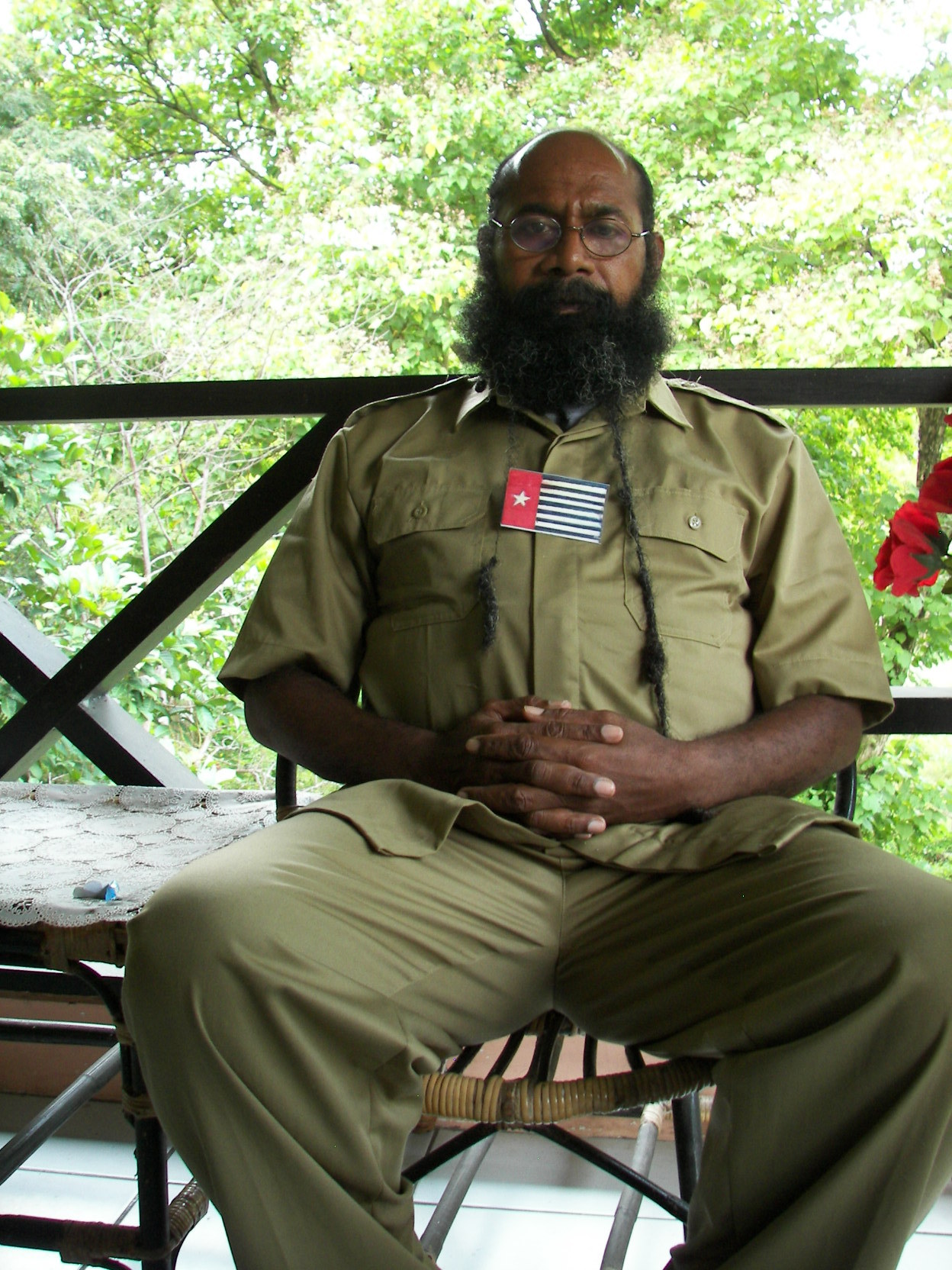 Filep Karma, a political prisoner, who persists in wearing the Morning Star on his shirt even in jail (Photograph: Eben Kirksey).

Many Papuan leaders have been imprisoned for raising the Morning Star. Filep Karma, who led a protest on Dec. 1, 2004, is currently serving a 15-year jail sentence for "rebelling." Amnesty International regards Karma, and some 90 other Papuans who are incarcerated, as political prisoners. "From a legal point of view," in the words of Amnesty's Asia-Pacific program director Sam Zarifi, the detention of these prisoners is "a violation of Indonesia's international legal obligations and...simply hurts the country's global standing."

Ever since Otto Bauer's influential 1924 essay, "The Nation", scholars have questioned the ability of small countries to thrive in the era of modern capitalism. Small nations are always forced to negotiate treaties with larger states and they are almost always at a disadvantage. But even though Papuan leaders are stuck within a situation not of their own choosing -- both under Indonesian rule and on the wider global stage -- they are still achieving surprising victories as they maneuver for rights and justice. Smelling freedom in the shifting winds of history, a multitude of church leaders, politicians, and ordinary citizens are starting to take action in solidarity with this struggle.

Eben Kirksey earned his Ph.D. from the University of California-Santa Cruz and is currently teaching the Environmental Humanities program at UNSW in Sydney, Australia. His first book, Freedom in Entangled Worlds: West Papua and the Architecture of Global Power, was published by Duke University Press in April 2012.