TANAH KARO, Indonesia (AP) -- An Indonesian volcano dormant for four centuries erupted for the second straight day Monday, shooting clouds of hot ash more than a mile into the air and forcing 30,000 people to flee. (Scroll down for photos)

Some domestic airplanes had to be diverted because of poor visibility.

Many villagers living along the slopes of Mount Sinabung in North Sumatra province wore masks as they packed their belongings and headed to emergency shelters, mosques and churches, said Andi Arief, a presidential adviser on disasters.

Their abandoned homes and crops were blanketed in gray soot and the air was thick with the smell of sulfur.

While two people died -- a 64-year-old woman from respiratory problems and a 52-year-old man from a heart attack -- it was too early to say if the volcano was to blame, said Priyadi Kardono of the National Disaster Management Agency.

Sinabung last erupted in 1600, so observers don't know its eruption pattern and admitted over the weekend they had not monitored it closely before it started rumbling days ago in the lead-up to Sunday's first, less-powerful blast.

Hours later, the alert was raised to the highest level.

Like other volcanoes along the Sumatra fault line -- the meeting point of the Eurasian and Pacific tectonic plates that have pushed against each other for millions of years -- it has the potential to be very destructive.

Stiff magna forming inside the conical tip can act as a plug, allowing pressure to build up until it reaches a bursting point.

"A volcano with a long repose period could deliver a more powerful eruption," as was the case with Pinatubo in the Philippines in 1991, which killed about 800 people, said Alain Bernard, a professor at the University of Brussels.

Sinabung could either go back to sleep or produce a series of blasts with increasing intensity, he said. "A Pinatubo-size eruption is a rare event and unlikely to appear during the following days. It takes normally weeks or months," said Bernard.

Though strong wind shifts or a powerful follow-up blast could affect air traffic in nearby Singapore and Malaysia, Transportation Ministry spokesman Bambang Ervan said so far only four domestic flights heading to the provincial capital of Medan were diverted.

The number of people evacuated reached 30,000 by Monday afternoon, said Erni Damanik with the Tanah Karo district information center. Many people living along the base of the 8,000-foot (2,400-meter) mountain have also moved to outlying villages.

Food, emergency tents, and medicine were on the way to the scene, officials said, including more than 17,000 respiratory masks.

Indonesia is spread across 17,500 islands and is prone to volcanic eruptions and earthquakes because of its location within the so-called "Ring of Fire" -- a series of fault lines stretching from the Western Hemisphere through Japan and Southeast Asia.

It is also home to some of the largest eruptions in recorded history.

The 1815 explosion of Mount Tambora buried the inhabitants of Sumbawa Island under searing ash, gas and rock, killing an estimated 88,000 people.

The 1883 eruption of Krakatoa could be heard 2,000 miles (3,200 kilometers) away and blackened skies region-wide for months. At least 36,000 people were killed in the blast and the tsunami that followed. 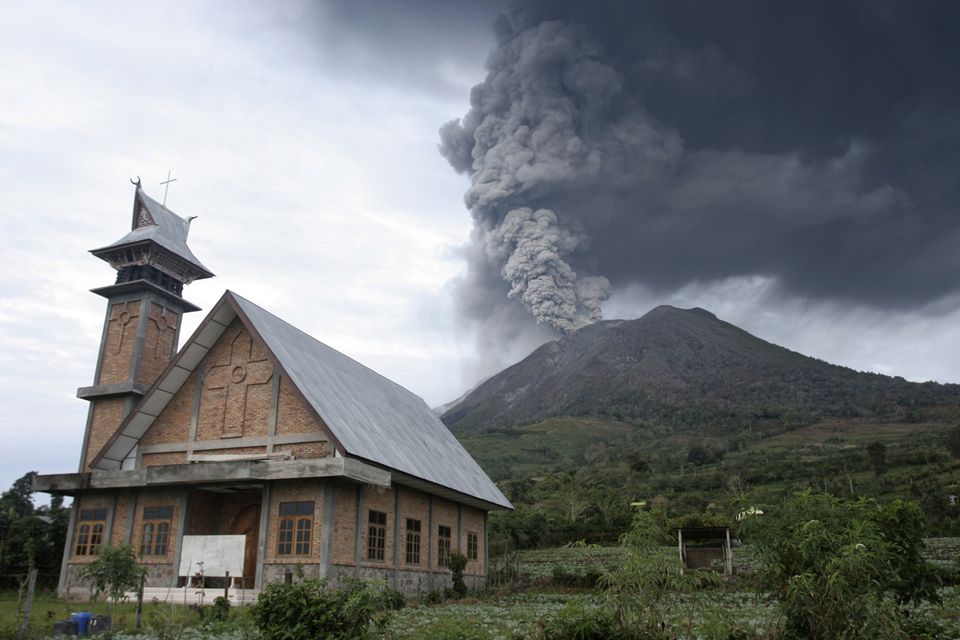