DEN BOSCH, Netherlands (AP) -- Farming is moving indoors, where the sun never shines, where rainfall is irrelevant and where the climate is always right.

The perfect crop field could be inside a windowless building with meticulously controlled light, temperature, humidity, air quality and nutrition. It could be in a New York high-rise, a Siberian bunker, or a sprawling complex in the Saudi desert.

Advocates say this, or something like it, may be an answer to the world's food problems.

"In order to keep a planet that's worth living on, we have to change our methods," says Gertjan Meeuws, of PlantLab, a private research company.

The world already is having trouble feeding itself. Half the people on Earth live in cities, and nearly half of those – about 3 billion – are hungry or malnourished. Food prices, currently soaring, are buffeted by droughts, floods and the cost of energy required to plant, fertilize, harvest and transport it.

And prices will only get more unstable. Climate change makes long-term crop planning uncertain. Farmers in many parts of the world already are draining available water resources to the last drop. And the world is getting more crowded: by mid-century, the global population will grow from 6.8 billion to 9 billion, the U.N. predicts.

To feed so many people may require expanding farmland at the expense of forests and wilderness, or finding ways to radically increase crop yields.

Meeuws and three other Dutch bioengineers have taken the concept of a greenhouse a step further, growing vegetables, herbs and house plants in enclosed and regulated environments where even natural light is excluded.

In their research station, strawberries, yellow peppers, basil and banana plants take on an eerie pink glow under red and blue bulbs of Light-Emitting Diodes, or LEDs. Water trickles into the pans when needed and all excess is recycled, and the temperature is kept constant. Lights go on and off, simulating day and night, but according to the rhythm of the plant – which may be better at shorter cycles than 24 hours – rather than the rotation of the Earth.

In a larger "climate chamber" a few miles away, a nursery is nurturing cuttings of fittonia, a colorful house plant, in two layers of 70 square meters (750 sq. feet) each. Blasts of mist keep the room humid, and the temperature is similar to the plants' native South America. After the cuttings take root – the most sensitive stage in the growing process – they are wheeled into a greenhouse and the chamber is again used for rooting. The process cuts the required time to grow a mature plant to six weeks from 12 or more.

The Dutch researchers say they plan to build a commercial-sized building in the Netherlands of 1,300 square meters (14,000 sq. feet), with four separate levels of vegetation by the end of this year. After that, they envision growing vegetables next to shopping malls, supermarkets or other food retailers.

Meeuws says a building of 100 sq meters (1,075 sq. feet) and 14 layers of plants could provide a daily diet of 200 grams (7 ounces) of fresh fruit and vegetables to the entire population of Den Bosch, about 140,000 people. Their idea is not to grow foods that require much space, like corn or potatoes. "We are looking at the top of the pyramid where we have high value and low volume," he said.

Sunlight is not only unnecessary but can be harmful, says Meeuws. Plants need only specific wavelengths of light to grow, but in nature they must adapt to the full range of light as a matter of survival. When light and other natural elements are manipulated, the plants become more efficient, using less energy to grow.

"Nature is good, but too much nature is killing," said Meeuws, standing in a steaming cubicle amid racks of what he called "happy plants."

For more than a decade the four researchers have been tinkering with combinations of light, soil and temperature on a variety of plants, and now say their growth rate is three times faster than under greenhouse conditions. They use no pesticides, and about 90 percent less water than outdoors agriculture. While LED bulbs are expensive, the cost is steadily dropping.

Olaf van Kooten, a professor of horticulture at Wageningen University who has observed the project but has no stake in it, says a kilogram (2.2 pounds) of tomatoes grown in Israeli fields needs 60 liters (16 gallons) of water, while those grown in a Dutch greenhouse require one-quarter of that. "With this system it is possible in principle to produce a kilo of tomatoes with a little over one liter of water," he said.

The notion of multistory greenhouses has been around for a while. Dickson Despommier, a retired Columbia University professor of environmental health and author of the 2010 book "The Vertical Farm," began working on indoor farming as a classroom project in 1999, and the idea has spread to several startup projects across the U.S.

Despommier argues that city farming means producing food near the consumer, eliminating the need to transport it long distances at great costs of fuel and spoilage and with little dependency on the immediate climate.

The science behind LED lighting in agriculture "is quite rigorous and well known," he said, and the costs are dropping dramatically. The next development, organic light-emitting diodes or OLEDs, which can be packed onto thin film and wrapped around a plant, will be even more efficiently tuned to its needs.

One of the more dramatic applications of plant-growing chambers under LED lights was by NASA, which installed them in the space Shuttle and the space station Mir in the 1990s as part of its experiment with microgravity.

"This system is a first clear step that has to grow," Van Kooten says, but more research is needed and people need to get used to the idea of sunless, landless agriculture.

"But it's clear to me a system like this is necessary."

Indoor Farming Could Be The Future Of Food Production (PHOTOS) 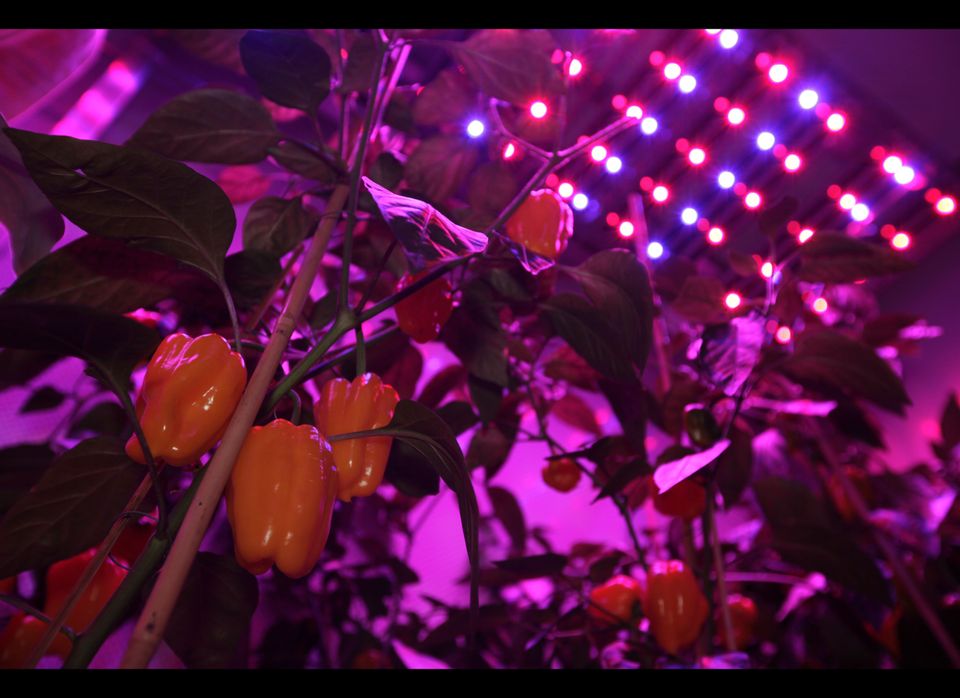 1 / 5
Netherlands Sunless Farming
Yellow peppers are seen under blue and red Light Emitting Diode (LED) lights at PlantLab, a private research facility, in Den Bosch, central Netherlands, Monday March 28, 2011. Farming is moving indoors, where the sun never shines, where rainfall is irrelevant and where the climate is always right The perfect crop field could be inside a windowless building with meticulously controlled light, temperature, humidity, air quality and nutrition. It could be in a New York high-rise, a Siberian bunker, or a sprawling complex in the Saudi desert. (AP Photo/Peter Dejong)
AP